Education Department chief executive Rick Persse this morning said his department had received “formal notification” of the mandate from SA Health two weeks ago, following weeks of informal discussions before that.

But the direction – announced yesterday – won’t take effect until December 10, the last day of the school year and two and a half weeks after borders open, allowing Delta in to South Australia.

It comes as the Education Department revealed it had made a “pre-emptive order” of air purifiers for classrooms, while a leading SA epidemiologist has called for masks to be made mandatory in primary and secondary schools.

Chief public health officer Professor Nicola Spurrier this morning said it was “really a question for Education” about why the vaccine mandate wasn’t brought in weeks ago, before the borders open next Tuesday and considering children under 12 still cannot be vaccinated.

“I provide advice and I provided that advice some time ago but there’s a range of different pressures in different sectors and we also need to make sure that the sector is informed, that consultation’s occurred,” she told ABC Radio.

The Education Department has told InDaily 685 of its 31,000 employees are “declining” to be vaccinated.

Under the new direction, all school staff and volunteers must have received at least one vaccine dose and have a booking for a second by December 10 – the last day of the school term.

Persse told ABC Radio this morning: “If I’d brought forward this date any earlier then that ran the very real risk of not having qualified teachers in some of our settings and invariably that could be in a setting that’s hard to staff.”

“So losing a senior secondary physics teacher in the far west coast is not a simple soft snap to be able to solve,” he said.

“We are very, very close to the end of the school year and as Professor Spurrier said… we are not expecting on the 24th of November to be dealing with hundreds and thousands of cases.

“It’s really a risk-based decision. The vast majority of our staff and volunteers have been vaccinated. We are talking about a fraction of our staff who have signalled that they are not intending to be vaccinated.”

After December 10, any staff not vaccinated will be required to take personal or unpaid leave.

Persse said once that leave had been used “that will tip into an industrial relations challenge for us”.

“Obviously we are hoping that that number… reduces as people get access to the information they need to make their decisions,” he said.

“But once those leave entitlements are exhausted then it will move into a process which could ultimately lead to people parting company with the department.”

The Australian Education Union is “analysing the industrial implications” and will meet on Saturday to consider the impacts on the education workforce.

Persse said the driving motivator for the vaccine mandate was to protect “that vulnerable cohort” of children under 12 who cannot yet access the vaccine.

He said he expected the vaccine would be approved for under 12s in the new year and “as things change we will make the necessary judgments based on the health advice”.

“Professor Spurrier has been with us on this journey with the Police Commissioner in terms of the drafting of the direction and the implementation of the date and we think this date works for everybody,” Persse said.

“Making a decision to mandate vaccines is a very significant decision and this mandate that was announced yesterday impacts tens of thousands of people. These decisions aren’t taking lightly.”

An audit is currently underway to assess whether improvements are needed in SA schools to improve airflow to reduce transmission of the virus.

Persse said the department had “done a pre-emptive order of some air purification units”.

“But the consistent advice nationally is that natural ventilation is the best way to go here and that includes making sure that all of our air conditioning systems are set to having a fresh air intake and they’re not just recirculating the same air,” he said.

University of SA epidemiologist Professor Adrian Esterman said air purifiers were a good idea for classrooms but he can’t understand why masks are “optional”.

Esterman told InDaily he believes masks should be made mandatory in both secondary and primary schools.

“Why are masks optional?” he said.

“We know masks work, we know they drastically reduce transmission.

“Teachers and kids should be wearing them, even young kids.

“Seven and eight year olds they understand about disease and I can’t see why they couldn’t wear a mask.” 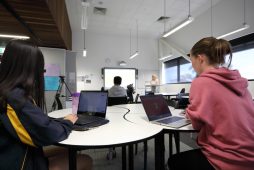 He said fully vaccinated people had an 80 per cent protection against infection “and even if you do get infected and you are fully vaccinated chances are that you will only have mild symptoms if any at all”.

He said those with full vaccine protection had only a five per cent chance of needing to be hospitalised and “almost a zero chance” of dying from the disease.