The committee members who have been inquiring into the Deputy Premier’s conduct met this morning to discuss a draft final report, opting to delay a final vote on whether to accept the document until tomorrow morning.

If accepted, the report is expected to concur with the inquiry’s counsel assisting, Dr Rachael Gray QC, that Chapman had both perceived and actual conflicts and should have recused herself from being the arbiter of the major project’s fate.

It’s widely anticipated that three of the five members of the committee – Labor MPs Andrea Michaels and Tom Koutsantonis, and ex-Liberal independent Sam Duluk – will vote to adopt the final report, with Liberal Matt Cowdrey likely to vote against, while his colleague Peter Treloar has been absent this week for personal reasons.

The looming report of the inquiry – which has been dubbed a ‘kangaroo court’ and ‘witch-hunt’ by Liberal members, including Chapman and Premier Steven Marshall – today prompted the Opposition to give notice of a motion of no confidence in the embattled Attorney-General – to be debated in lieu of Question Time tomorrow.

Labor will also move for Speaker Dan Cregan to write to fledgling Governor Frances Adamson to inform her of “the House’s will” that Chapman no longer serve in the ministry or as Deputy Premier – but Premier Steven Marshall has repeatedly ruled out removing her.

It’s understood the committee is considering a range of further possible censures, including suspending the Deputy Premier from attending parliament for 11 sitting days – which would mean the Government has no effective working majority and could only control the House on the whim of any three of the five crossbenchers on the floor of parliament.

Matters raised in the inquiry are also likely to be recommended to be referred for further investigation to Ombudsman Wayne Lines, who today told a separate parliamentary committee that he had declined an invitation to brief the inquiry, in part because he expected the issue “may in one form or another come to my office”.

“I was invited to attend the committee and present some background information on the meaning of conflicts of interest,” Lines told parliament this morning.

“I declined to attend, because I didn’t think it was appropriate in my role to provide that type of legal advice to the committee – being aware that the committee was engaging its own legal counsel – and bearing in mind there was potential that the type of matter the committee was considering may in one form or another come to my office.”

Asked whether the issues canvassed had already been referred to his office separately via the Office of Public Integrity, Lines replied: “I really cannot comment on that.”

The prospect of Lines investigating Chapman’s actions as Planning Minister would raise further issues, given he told the committee today he was locked in a standoff with her department over additional funding, after many of the functions previously administered by the Independent Commissioner Against Corruption were recently transferred to his office in a shock legislative shakeup.

Lines said the Attorney-General’s Department had opted to assess how the changes affected his caseloads before assigning extra funding for additional staff.

“I was disappointed with the Department’s response but understand they want to take a ‘wait and see’ approach,” he said, adding: “That will be very difficult to sustain.”

Asked whether Chapman should recuse herself from decisions about his funding given the prospect of his office investigating her conduct, Lines said: “I think [that] would be pre-emptive… we haven’t had a referral.”

That prompted Koutsantonis, a member of both committees, to respond, “Give it about…” and gesture to the clock.

The report of the inquiry into Chapman’s port decision is also expected to make recommendations about the legislative regime that saw the minister as the sole arbiter of a decision affecting a billion-dollar business on the island – and which prompted proponent Kangaroo Island Plantation Timbers to subsequently rebadge and quit the region. 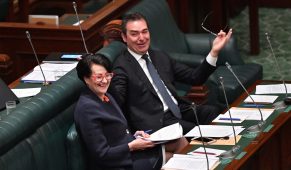 'No fair-minded person could find against me': Chapman's inquiry defiance

The relevant section of the Planning, Development and Infrastructure Act, which was introduced in 2016 under the former Labor government, is likely to be recommended for referral to the Environment, Resources and Development Standing Committee for review, after Gray found pointed to the “undesirability of having a single decision-maker in respect of major developments”, instead arguing such matters should be the purview of cabinet or the State Planning Assessment Panel.

Frances Nelson QC made a final submission in the minister’s defence to the committee, blasting the “incomplete and inadequate” evidence and “a blatant denial of procedural fairness” during its deliberations.

“None of the evidence before the committee is in any way sufficient to support ‘findings’ by Dr Gray,” Nelson argued.