Although it is foreign-owned, the state’s biggest listed beneficiary was New Zealand-based SkyCity Entertainment, which accepted $23.2 million of JobKeeper payments to sustain 880 staff at Adelaide Casino – its only major Australian operation.

The company, which also runs New Zealand casinos in Auckland, Hamilton and Queenstown, received about $A9.8 million from the New Zealand Government in wage subsidies. Of that, it has repaid $6.4 million.

The transport and tourism company, which this month changed its corporate name to Kelsian Group, posted a $37.8 million net profit in 2020-21 but did not offer to pay back any of the JobKeeper support.

Beach Energy, the state’s fourth-largest company, received $7.56 million in JobKeeper to support 447 jobs during the pandemic but did not repay any.

The oil and gas producer reported net profits after tax of $501 million in 2019-20 and $371 million last financial year.

Codan, Mayfield Group and Silk Laser all received more than $3 million in JobKeeper payments across the two years but chose not to pay any back, despite all making profits in 2019-20 and 2020-21.

Mawson Lakes company Codan posted a record net profit after tax of $90.2 million for the 2020-21 financial year following a previous record profit of $64 million in 2019-20. 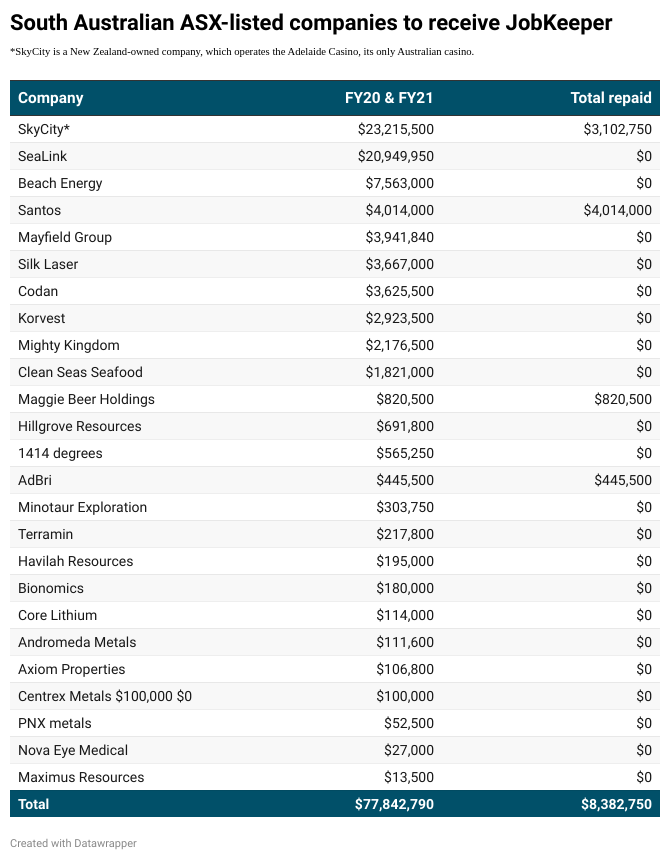 The federal parliament passed a Treasury Laws Amendment in September that required listed entities to provide a notice to the ASX, for release to the market, if it, or a subsidiary, received JobKeeper payments during the financial year.

If the listed entity received a JobKeeper payment and lodged their annual reports for the financial year before September 14, it then had 60 days to give their notice to ASX. The deadline was on Friday.

For all other listed entities that received a JobKeeper payment, the notice must be given to ASX within 60 days from when its annual report is lodged with ASIC.

There are about 65 South Australian headquartered companies listed on the Australian Securities Exchange.

Of those, 24 posted details of their JobKeeper benefits before Friday’s deadline.

Santos was among the hardest-hit companies during the early days of the COVID-19 pandemic when its share price plummeted due to collapsing world oil prices, which led to it posting a $460 million loss for the 2020 calendar year.

“By November 2020, it was clear that the impact of COVID-19 on Santos would be less than expected, so Santos repaid this amount in full to the government during December 2020,” Santos managing director and chief executive officer Kevin Gallagher said in an earlier statement to the ASX.

Maggie Beer Holdings received $820,500 to protect 42 jobs but has paid the money back in full along with construction materials company AdBri, which repaid all of the $445,500 it received.