Seasonally adjusted figures for September released by the Australian Bureau of Statistics on Wednesday show that 812 houses were approved in South Australia in the month, down from 822 in September 2020.

It is also only the second time this year that house approvals in SA have fallen below 1000 in a month, after reaching a seasonally adjusted 940 in July.

The housing construction industry received a huge boost in June 2020 with the introduction of the HomeBuilder scheme during the depths of the COVID-19 pandemic.

Late last year, the federal scheme was extended, allowing applications to be submitted until April 14 with work needing to start within six months of signing a new contract, although the size of grants was trimmed from $25,000 to $15,000.

In the 12 months to the end of September, the seasonally adjusted ABS figures show there were 12,887 new houses approved in South Australia, the highest on record.

Master Builders SA CEO Will Frogley said predictions of a post-HomeBuilder cliff had not materialised.

“Demand is still strong six months after applications for the grant closed,” he said.

“Approvals have cooled from HomeBuilder-driven record highs but are well above what they were pre-pandemic.

“A strong building and construction industry is continuing to drive South Australia’s social and economic recovery. I don’t know many people in the industry who aren’t busy.

Frogley said during the COVID-19 pandemic South Australians had prioritised spending on their homes as working from home arrangements increased the need for larger and more comfortable living and work spaces.

“The first home buyer market, mid-range and luxury new builds and renovations are all strong,” he said.

“We’ve seen a fundamental shift in the market with increased demand for space.

“Many South Australians are moving further north, south and to the regions with larger blocks and lifestyle a key driver – for many work from home is here to stay.” 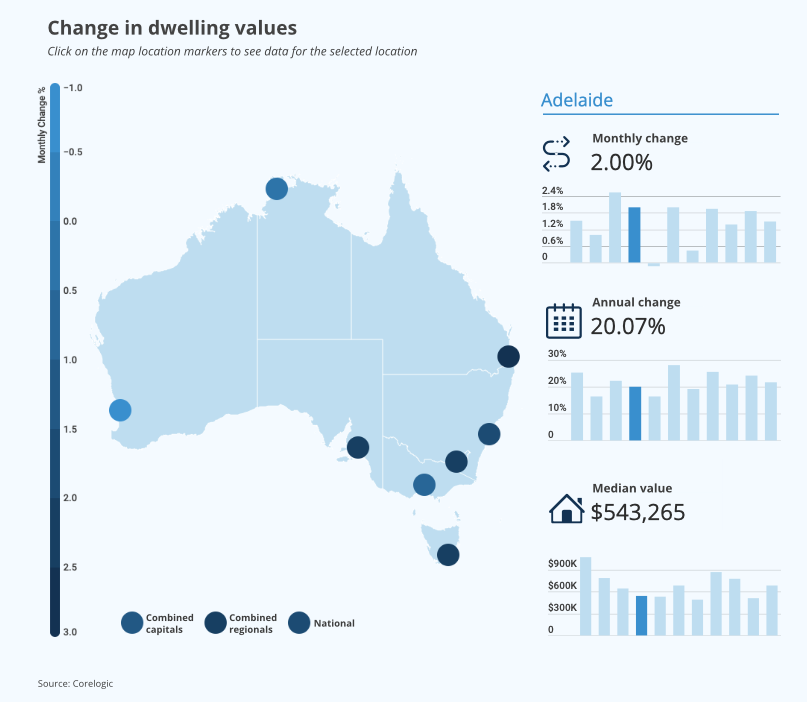 The demand spike caused a shortage of building materials such as structural timber and steel while associated price increases put some builders under pressure.

Frogley said the industry was still facing shortages of materials such as timber, steel,  and laminated beams but he expected supply chains to ramp up as the COVID-19 situation settles interstate.

“The state and federal governments have committed money to bring Kangaroo Island timber to the mainland and that can’t come soon enough for many builders,” he said.

In the established homes market, CoreLogic published its October figures this week showing Adelaide’s house values grew by 2 per cent for the month.

Nationally, housing values rose 1.5 per cent in October, a similar result to August and September.

However, the market is continuing to slowly lose momentum since moving through a peak monthly rate of growth in March of 2.8 per cent.

At the other end of the spectrum, Brisbane has taken over as the fastest-growing market with housing values up 2.5 per cent in October.

He said house prices continued to outpace wages by a ratio of about 12:1.

“This is one of the reasons why first home buyers are becoming a progressively smaller component of housing demand,” Lawless said.

“New listings have surged by 47 per cent since the recent low in September and housing-focused stimulus such as HomeBuilder and stamp duty concessions have now expired.

“Combining these factors with the subtle tightening of credit assessments set for November 1, and it’s highly likely the housing market will continue to gradually lose momentum.”