Yesterday marked the first day of hearings for a committee established to investigate whether Chapman, the state’s Planning Minister and Attorney-General, had a conflict of interest, misled parliament or breached the ministerial code in relation to her decision to reject Kangaroo Island Plantation Timber’s port proposal despite departmental advice that it could have proceeded.

KIPT’s former managing director Keith Lamb, who left the company last month, gave evidence that the company expected the port proposal to proceed under Chapman’s predecessor, Stephan Knoll – before he left the ministry in mid-2020 amid a parliamentary entitlements furore.

Shortly before that point, Lamb said, “the minister was anxious to know where we were up to [and] made statements to the effect of—and I don’t want to misquote him, so I will keep it general—’This project is an important piece of infrastructure for the island, we think it’s an important asset to the community… we would like to see it proceed’”.

He said the company went “as far as suggesting, at the government’s pleasure, that if it was to make an announcement… that the announcement should be made on a Sunday so that we wouldn’t have to go into a trading halt”.

He said that was regardless of what the decision might be, but “I was fairly confident it would be a yes”.

“I went as far as instructing my office to book a room in celebration and we drew up the invite list for the celebration,” he said.

“So we were that far advanced, we had press releases ready to go.”

Chapman eventually ruled against the port in August this year.

During the hearing, the committee’s counsel assisting, Dr Rachael Gray, showed Lamb a map of the island and asked him to identify the proposed haulage route leading to the planned port, noting its proximity to property owned by KI mayor Michael Pengilly, a former Liberal MP and longtime confidant of Chapman’s.

“And did you understand that that route would go past Mayor Pengilly’s house?” she asked.

To which Lamb replied: “Yes… they all converge and go on to North Coast Road and go past the mayor’s house; that’s correct.”

“No, I don’t recall that analysis by me – it might have been done by my executives in the planning process, but I didn’t take into account, in my mind, minister Chapman’s landholdings.”

Gray then brandished the map, pointing to a pale green-coloured section and asking if it indicated an area that forestry trucks would be operating to remove trees, which Lamb confirmed.

“Are you aware that that pale green area is adjacent across the road from land owned by Minister Chapman?” Gray asked.

“I did not know that until you showed me this map just now,” Lamb responded. 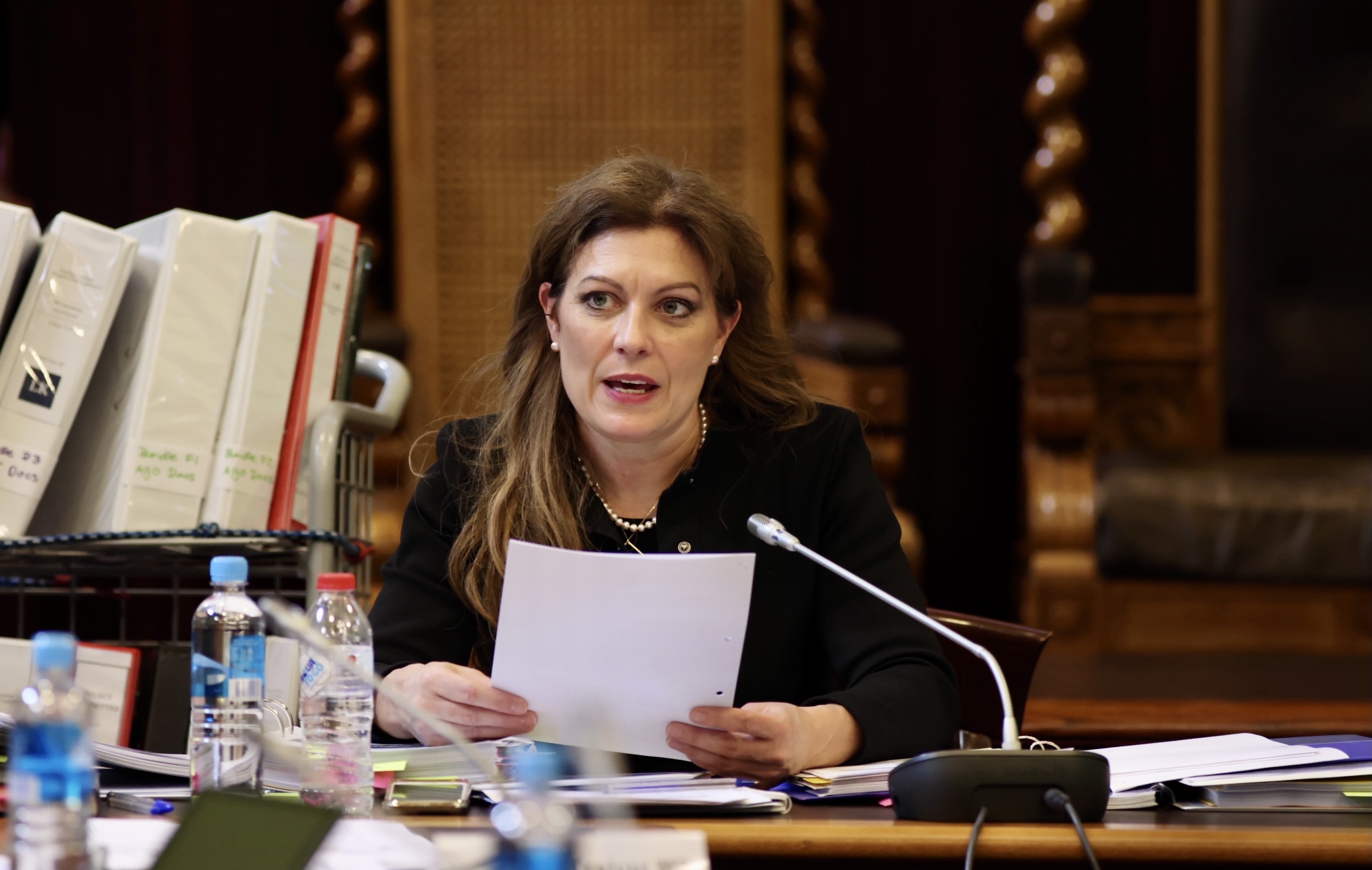 Lamb told the inquiry it was his view “that the proposed Smith Bay sea port was capable of approval by the Minister for Planning” and that supporting evidence “showed that the net financial gain to the island community was overwhelmingly positive”.

“The same report showed the environmental impact was negligible to positive,” he said.

“The advice of the responsible government departments and offices supported this view.

“The government had several opportunities to reject or stop the project early in the planning process but each time waved it on.

“Had the seaport project proceeded, in my view the benefit of the island would have included a permanent one-off uplift in land value of about $1 billion.

“Had forestry continued on the island, it would have bought diversification benefits to the whole community for generations to come…

“When the National Forest Policy Statement was negotiated some 30 years ago, I don’t believe the authors could have ever conceived the spectacular execution failure that has resulted on Kangaroo Island.

“The island community and the wider South Australian economy is poorer as a result of the decision to abandon the Smith Bay project.”

Chapman has consistently denied a conflict of interest, and has branded the inquiry a “witch-hunt”.

She will front the committee this morning at 10am.

Pengilly, who yesterday told InDaily the inquiry was a “joke”, will give evidence later in the week.

Labor yesterday pointed to an exchange in parliament in August, after Chapman vetoed the port proposal, in which she was asked whether she or “any family member or related entity” owns land on Kangaroo Island “in an area near or impacted by the KIPT forest or a proposed port at Smith Bay”.

'I'm not sure it's even lawful': Bombshell evidence as Chapman inquiry begins

At the time, she answered: “I have given a rather comprehensive, extended response to this to the parliament in a ministerial statement, but in short, no.”

In that ministerial statement, delivered in May when she was still awaiting an assessment report, Chapman insisted that “while I was born on the island and have significant family history there, I have no conflict of interest in relation to this matter”.

“I have no pecuniary interest in the affected property or the business of KIPT, nor any property or industry associated with or potentially impacted by the proposed wharf,” she said.

“This application will be given due consideration and a prompt determination – if it stacks up, it will be approved, and if it doesn’t it won’t.”