The SA Health-commissioned University of Adelaide modelling, released to InDaily, considers the impact of reopening SA’s borders with 80 per cent of South Australians aged 16 and over fully vaccinated against COVID-19.

In each scenario, only fully vaccinated people would be able to enter SA.

The study, by Professor Joshua Ross from Adelaide’s School of Mathematical Sciences and Dr Thomas Prowse from the School of Biological Sciences, found under the initial scenario that SA would likely be able to manage the ward and ICU demand from COVID-19 infections generated in the community – but not under the latter two scenarios modelled.

Reopening at 80 per cent with all existing public health measures retained would see an estimated 27 per cent chance of an ‘outbreak’ – defined as “averaging more than 100 cases per day over any three-day period”.

“In the event of an outbreak, this scenario is estimated to be manageable with respect to hospital capacity,” the report states, estimating a median Peak Ward Occupancy  of 36 beds, with an “extremely small chance of demand exceeding 200 ward beds”.

Peak ICU Occupancy is estimated at a median of nine beds with an extremely small chance of demand exceeding 30, while the median prediction for total deaths under this scenario is 13 over 300 days, with a total range between four and 51.

Premier Steven Marshall announced last week that borders would reopen on November 23, with broader restrictions to be eased once SA hit a vaccination rate of 90 per cent of the population over 12 – which Marshall predicted would occur before Christmas.

However, the modelling includes a table that suggests while the 80 per cent vaccination rate is expected by late November – albeit after the 23rd– the 90 per cent benchmark is not predicted to be met until January, and even then only for people aged 16 and over. 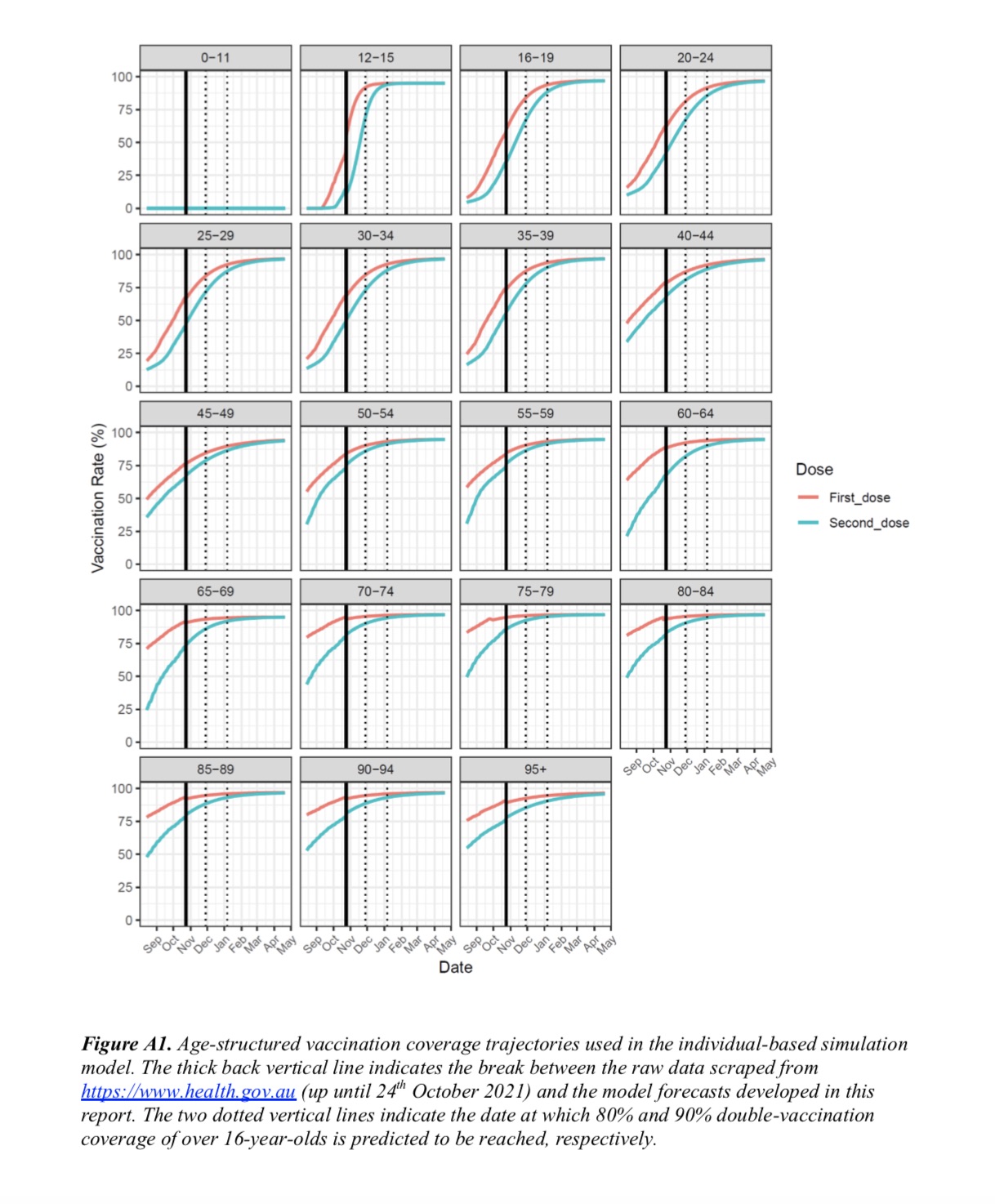 Under the modelling, the chance of an outbreak in the second scenario – removing the mask mandate – soars to 64 per cent, with the researchers predicting this to “present risks to being able to manage cases, in particular with respect to ICU capacity”.

Under this scenario, the median number of total deaths is modelled at 55.

Under the vaccine certificate model, that median for total deaths rises to 315, with a range between eight and 424.

In that scenario, which is modelled with an expected 75 per cent compliance rate to the vaccination certificate requirement, there is considered to be an 84 per cent chance of an outbreak, which would see ward occupancy surge to 351 beds and ICUs to be clogged with a median peak of 72 (ranging as high as 119.)

The modelling simulated “the introduction of 20 COVID-positive cases per day for the first 30 days” after the border reopening – 600 cases in total.

In each scenario, the modelling “assumes that the public health and social measures in place at the beginning of border opening remain in place for a 300-day period”.

That’s despite the SA Government’s COVID-Ready Plan – released before the modelling was received – allowing for the easing of restrictions, potentially within a month of the borders reopening.

In a statement, Marshall said the modelling shows “scenario one is the safest way forward”.

“The COVID-Ready Plan implements scenario one to ensure that we can protect the health of all South Australians in the best way possible,” he said.

“Scenario one is where South Australia opens its borders and maintains current public activity restrictions, including masks.

“South Australia would be able to safely manage hospital and ICU demand from COVID-19 infections generated in the community as long as there are high testing rates, contact tracing is maintained, and cases and their close contacts are quarantined.”

This is understood to refer to the fact that Ross has previously worked as a researcher/collaborator on the Doherty Institute’s national modelling.

Marshall said the Government was “putting in the work to make sure that our hospitals and health services, both metropolitan and regional, are well-prepared – and our COVID-Ready Plan and the modelling reflects this”.

“Of the recent modelling provided, scenario one is the safest way forward, and supports opening our borders whilst keeping current public health restrictions in place,” she said.

“Under scenario one, there is a 27 percent chance of an outbreak…

“The second scenario considered retaining current restrictions, except no longer requiring masks to be worn, which increases the chance of an outbreak to 64 percent. In this scenario, were an outbreak to occur, the modelling predicts there are much higher risks associated with managing cases, in particular around ICU capacity.

“The final scenario considered relaxing current restrictions by introducing the use of vaccine certificates to allow higher-risk activities by double-vaccinated individuals. Under this scenario, a chance of an outbreak is much higher at 84 per cent.

“In this scenario hospital system and health services would be under significant pressure and could severely impact the way we can safely manage cases in the community.

“Using scenario three, we would have a high chance of experiencing the grim reality of as many as 400 South Australian deaths – a huge number of lives lost to this extremely severe disease, especially when compared to the death rates for flu and road accidents in our state.”

Spurrier said that while “all modelling has an element of uncertainty… it makes clear that the first scenario will provide the greatest opportunity to safely manage the inevitable introduction of COVID-19 into our community”.

The modelling appears set to underpin the Government’s rationale for retaining ongoing restrictions, at least in the immediate term, after criticisms from business groups about the ongoing impost of density requirements.

However, given last week’s COVID-Safe Plan was unveiled before the modelling had been received, it’s unclear how it will impact on the expectation of easing or removing further restrictions after the 90 per cent benchmark is reached.

“South Australia is in a rare situation of the world – opening borders with no cases in the community,” he said.

“COVID-19 is in the world and it is coming to South Australia – we can’t stop it coming.

“Our strategy is to only open borders and ease restrictions as we maximise our protection through vaccines.