A joint parliamentary committee set up to draft a code of conduct for MPs yesterday finally handed down its suggested wording – seven months after a report by the state’s acting Equal Opportunity Commissioner detailed allegations of sexual harassment and a “rotten” and “toxic” workplace culture at Parliament House.

The draft code would supersede parliament’s current “statement of principles” and would explicitly order MPs not to “harass, sexually harass, or discriminate against” a member of their staff, another member of parliament, a staff member of another MP, or a parliamentary staffer.

It also sets out standards regarding conflicts of interest, the receipt of gifts, public resources and confidentiality.

Under the committee’s proposed model, if a MP is suspected of breaching the code they could be investigated by the state’s Ombudsman.

But the Ombudsman wouldn’t have the power to enforce sanctions or lay charges against a MP found in breach of the code, with its powers restricted to making recommendations only.

Instead, the parliamentary committee has suggested that it would be up to political parties or the parliament itself to enforce any potential sanctions, with voters having the ultimate say on whether the MP should be removed from office at a general election.

When it comes to standards for members of parliament, the main argument seems to be ‘it’s too difficult’

It comes after ICAC Commissioner Ann Vanstone recommended that parliament establish the role of a parliamentary conduct commissioner to investigate complaints against MPs – a model she argued would address “most if not all of the deficits in the current system which discourages complaints”.

Vanstone suggested that if the parliamentary conduct commissioner suspected a MP was in breach of the code of conduct, an independent panel could be set up to determine whether removal of the MP was warranted.

But in a report tabled in parliament yesterday, the joint parliamentary committee’s chair – former speaker Josh Teague – wrote that Vanstone’s proposal was “both complex and, in the Committee’s view, unlikely to improve upon the existing statutory frameworks” as it would require amendments to both the Judicial Conduct Commissioner and Constitution Acts.

He wrote that it should be up to voters to choose whether a MP should be removed from office if they are found in breach of the code.

“Members of Parliament are elected by the electors they represent,” he wrote.

“Ultimately, Members of Parliament are removed from office by their electors, and it is this final sanction that is available to the electorate for breaches of the Code of Conduct that have been found proved – either by the Ombudsman or some other body.

“The Committee does not consider that legislative amendment is necessary to meet the purpose of the Code of Conduct.”

In a statement to InDaily, Vanstone described the proposal as “out of step” with the behavioural codes in place for every other public officer in South Australia.

She said her recommendation to establish a parliamentary conduct commissioner was what she considered to be a “best practice model”, but noted that it was ultimately up to parliament to decide how its conduct code should work.

“However, the absence of consequences for poor conduct, other than being voted out at an election, is out of step with the regime applicable to every other public officer in South Australia.”

Equal Opportunity Commissioner Jodeen Carney was equally critical of the lack of sanctions written into the draft code, saying “people have a right to be cynical”.

She said it was ironic that the committee cited complex legislative changes as the reason not to implement Vanstone’s recommendation, when “the parliament excelled at emasculating the ICAC’s functions about a month or so ago in the blink of an eye”.

The former Northern Territory Country Liberal politician said it was also ironic that parliament last night passed changes to the Constitution Act that mandated that the House of Assembly appoint an independent speaker.

“When it comes to standards for members of parliament, the main argument seems to be ‘it’s too difficult’,” she said.

“There is an ongoing inconsistency in the rhetoric they (MPs) are using and I think all South Australians should be concerned about that.”

Carney said it was “an open question whether people who are in the parliamentary workplace who are harassed will have confidence about an appropriate sanction”.

“People should ask themselves if they were harassed – sexually or otherwise – in the parliamentary workplace, is what was produced yesterday going to give them confidence?

“I respect members of parliament, I really do – I’ve been one in another jurisdiction, I’ve worked for one here – I respect their rights to legislate, I respect any member of parliament to participate in debate as they see fit.

“Nevertheless, I ask myself whether even they think they have done enough.”

Teague wrote in his report that the code of conduct would “not stand alone” and would be “supplemented” by a People and Culture unit that is in the process of being set up at Parliament House.

He said the unit would “assist Parliament in both the prevention of prohibited behaviours, and in management of complaints as they arise” as well as provide “support to persons who experience harassment, sexual harassment, and discrimination with a victim-centred approach”. 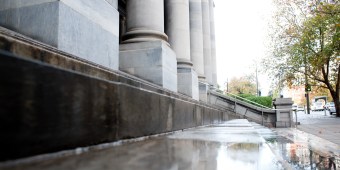 Both houses of parliament need to vote to adopt the draft code of conduct in their standing orders before it becomes enforceable.

Premier Steven Marshall said yesterday that it was up to the parliament to determine whether to adopt the code of conduct.

“I’m not going to pre-empt the discussions which are going on in parliament,” he said.

“I think it looks like it’s in a good position, but ultimately every member of parliament will need to have their say.

“This is the part which is determined by all members of parliament, rather than by the elected government.”