The South Australian Spirit Producers Association (SASPA) has today launched its industry blueprint as part of its bid to make the state Australia’s ‘Spirit State’.

It estimates the sector is on track to reach $39 million in sales in 2022, contributing $30 million to Gross State Product (GSP) and employing 620 people.

However, the blueprint predicts sales to more than triple to between $120 million and $180 million by 2031 and employment to increase to 2300 direct jobs.

This has included the establishment of 34 new distilleries since the beginning of 2016.

About two-thirds of SA distilleries are located in regional areas while a third are in Adelaide. 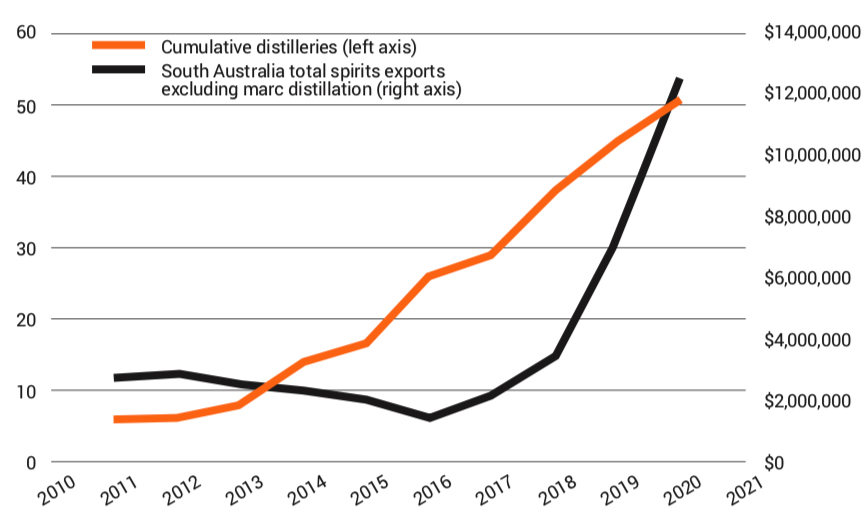 South Australian spirit sales and exports have grown substantially in the past decade.

Georgiadis, who won the KWP! Creative Thinker Award at InDaily’s 40 Under 40 this year, said the SA spirits sector was where the state’s wine industry was 30 years ago – on the cusp of being the nation’s best and world-renowned – and this blueprint was key to its future.

“The South Australian spirits industry now has a well-considered path forward for how we can collectively work together to achieve the continued rapid and sustainable growth of South Australia’s spirits sector,” the Never Never Distilling co-founder said.

“For the first time, we have gathered industry data to allow us to describe and quantify the economic contribution of our industry to the state and our future potential for growth – and let me tell you that it is as exciting as we have all believed.

“We certainly have the potential to make South Australia the nation’s ‘Spirit State’.”

Following several months of research, a survey of distilleries, collaboration with government organisations and universities, the spirits industry roadmap has outlined six key priority areas to grow the sector.

Suggested actions include holding industry networking events and workshops and collaborating with the local craft brewing, wine, and food industry.

It also says the industry should promote stories of successful collaborations and work with industry groups such as Food SA, the SA Tourism Industry Council and the AgTech advisory group to gain access to various programs such as the SME Food and Beverage Hub and the I Choose SA program.

The blueprint found that a training pathway was urgently needed to increase the understanding of risk, regulations and the safety of South Australian spirits production.

It says it also needs to find an education partner to establish the distilling stream of the Certificate IV in Artisan Fermented Foods in South Australia, a nationally recognised course that currently is not delivered in Australia.

This includes immediately identifying South Australian Government export activations that are in train for the wine and food sectors that have the potential to increase spirits export opportunities and actively engage spirits exporters.

Developing strategies to attract private investment and attention from government will be crucial to sales growth, according to the blueprint.

A detailed supply chain analysis is also needed to identify the vulnerabilities and development opportunities for the supply chain to support growth.

Effective innovation in product development and production are also identified as key areas.

These actions include developing policies on the responsible consumption of alcohol, committing to being carbon neutral by 2050 via the development of a pathway to carbon neutrality such as partnerships with renewable energy providers and completing a review of recycling and sustainability options for spirits bottles.

The blueprint also advocates for increasing the number of small venue licences through a three-year trial in Adelaide suburbs, the Riverland, Adelaide Hills, McLaren Vale and Barossa.

The roadmap says the industry should aim to create better tourism experiences through the activation of more quality distillery cellar doors that are high-value and saleable into digital tourism distribution chains.

It also advocates for the growth of regional tourism and festivals and the promotion and further development of the SASPA Spirit Trail and SpiritFest.

The number of new distilleries opening in South Australia is driving growth.

The South Australian Spirit Producers Association (SASPA) was formed in 2018 as the first dedicated membership-based association to represent the diverse and growing industry, from metropolitan Adelaide, its surrounding hills, wine regions and beyond.

It aims to promote SA as a leading spirit and liqueur region, represent distillers and producers at local and state government levels and protect the integrity of the industry.

Primary Industries and Regional Development Minister David Basham said the craft spirits blueprint was a national first industry that would help all aspects of the sector to reach its full potential.

“The State Government believes the opportunities to grow the spirits industry in South Australia and position us as a national leader in this space are within our grasp,” he said.