The 2021 United Nations Climate Change Conference, known as COP26, will take place in Glasgow from Sunday and will be attended by world leaders including Prime Minister Scott Morrison.

Australia has been accused of being the developed world’s weakest link when it comes to achieving net-zero greenhouse emissions by 2050 – despite an eleventh-hour deal struck by the Morrison Government with junior coalition partner the Nationals this week.

However, Gallagher said Australia had an opportunity to become a major player in achieving net reductions globally.

“Australia has a competitive advantage in carbon storage and international trading in carbon credits could pave the way for Australia to become a carbon storage superpower – just as we have established our position as an energy superpower over the last half-century,” he told the Darwin conference.

“One of the most important outcomes that COP26 could deliver is the implementation of Article 6 of the Paris Agreement to facilitate bilateral or multilateral carbon trading between countries.”

There are about 25 carbon capture storage projects operating around the world that store almost 40 million tonnes of CO2 each year, including Chevron’s 4 million tonnes per annum Gorgon project in Western Australia.

Santos is expected to make a final investment decision on its 1.7 million tonnes per annum Moomba CCS project in South Australia in the coming weeks. The project will be one of the world’s largest CCS projects and has the capacity to be expanded to store up to 20 million tonnes annually across the Cooper Basin.

Gallagher said carbon prices in some countries were much higher than in Australia and the ability to sell Australian carbon credit units to countries such as Japan and Korea could lead to more CCS projects, providing scale for a stronger domestic carbon market.

“Just as Australian LNG is valued in these markets because they lack their own energy resources, carbon storage is now valued because Japan and Korea lack the geological storage or land required for nature-based offsets,” he said.

“On the other hand, because of its geology, Australia has a global competitive advantage in CCS with storage capacity of up to 300 million tonnes of CO2 per year.”

In June, Santos and its project partner Beach Energy were awarded a $15 million grant from the Australian Government’s Carbon Capture Use and Storage Development Fund towards the $210 million Moomba CCS project.

Last month the oil and gas giant signed a Memorandum of Understanding with the Timor-Leste regulator Autoridade Nacional do Petróleo e Minerais to progress CCS plans to store up to 10 million tonnes of CO2 per annum at its Bayu-Undan field in the Timor Sea.

Gallagher said this was because CCS was the only way to reduce emissions from hydrocarbons at scale.

The Moomba CCS project will allow Santos to capture the 1.7 million tonnes of CO2 currently separated from the natural gas stream at its Moomba plant each year and store it underground. 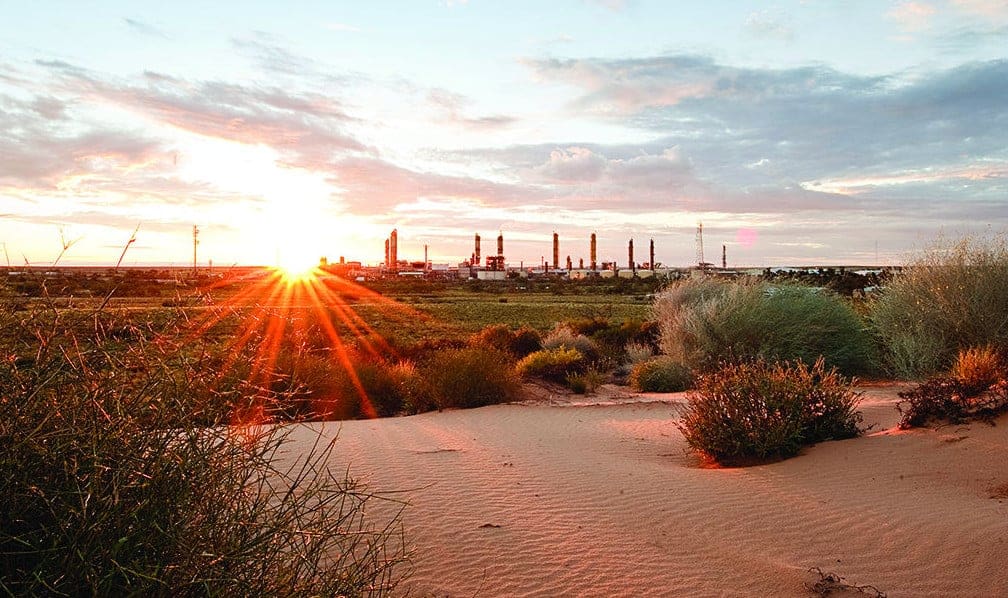 The Cooper Basin operations of Santos span the border in the north-east of South Australia and south-west of Queensland. Picture supplied.

The carbon has the ability to later be converted into ‘blue hydrogen’, the term given to hydrogen produced from fossil fuels. Hydrogen produced using renewable energy is known as green hydrogen.

“This significant price barrier is why at Santos we are embarking on a very deliberate strategy to build our clean hydrogen strategy first through natural gas and eventually transition to renewable hydrogen technology,” he said.

“According to a recent study for the Clean Energy Finance Corporation, natural gas with CCS produces the lowest-cost clean hydrogen in Australia right through the 2030s until the costs of hydrogen made with electrolysers becomes cheaper.

“I believe the oil and gas industry has a competitive advantage in CCS and clean hydrogen production because we understand how to safely produce, process, store, transport and distribute flammable gaseous products.

“We have the infrastructure and existing customer base, safety protocols and the expertise that comes with more than 60 years of experience.”

It is also on track to complete its merger with Oil Search by year-end, a move that would boost its market capitalisation well beyond $20 billion and make it a top-20 ASX-listed company.

A spike in energy demand in recent months as the world opened up after COVID and a supply shortage has seen LNG spot prices go to record highs, helping Santos deliver record sales of $1.52 billion in the September quarter, generating record quarterly free cash flow of almost $500 million.

“This has shaken energy markets in Britain, Europe and parts of Asia, reminding everyone that gas remains a very important part of the energy mix – and I believe it will continue to be so for at least the next two decades,” Gallagher told the SEAAOC conference yesterday.

“Renewables alone cannot replace hydrocarbons in many uses beyond electricity.

“This includes direct heating, the feedstock for the fertilisers at the heart of our modern food production system, the feedstock for the synthetics that provide about 60 per cent of the world’s clothing fibres – not to mention building products such as cement and poly pipe as well as the plastics which are endemic in our everyday life such as milk bottles, toothpaste and bread wrappers.

“Therefore, zero-emissions technologies like CCS that make hydrocarbon fuels cleaner are essential to meet the world’s emissions reduction targets and start the journey to a clean hydrogen future.”