The broad-ranging inquiry into the governance standards of Aboriginal community-controlled organisations was launched by parliament’s Aboriginal Lands committee in February, despite opposition from several prominent community leaders and Labor warnings that it could cause “great harm to individuals, tearing families apart and damaging communities”.

It followed a request from Premier Steven Marshall, who holds the Aboriginal affairs portfolio and was prompted by “mounting concerns within the SA Aboriginal community about poor governance and alleged corruption” within community-run organisations.

The committee heard from 25 witnesses and received 46 written submissions, but in an interim report tabled in parliament this week, the committee’s chair and Liberal MLC Terry Stephens wrote that the “bulk” of the evidence was confidential.

“A consistent theme from these submitters was that they would fear retribution from members in their communities if they spoke publicly about their concerns regarding individual Aboriginal corporations,” Stephens wrote.

According to the interim report, the committee received “a number of public submissions from Aboriginal corporations which provide positive reports on how that organisation is fairing (sic)”.

But it also received “confidential or anonymous submissions about the same Aboriginal corporations, claiming different accounts of how those organisations are truly running behind closed doors”.

“Stakeholders submitted that, unless you are a director on the board, it can be difficult to ascertain where money received by those corporations is ending up,” Stephens noted.

“The Committee heard on multiple occasions from submitters alleging nepotism, favouritism and closed dealings within the board memberships from community members across a wide range of Aboriginal communities.

“The Committee heard from concerned Elders, Mathawi (community Leader/Chief) and distressed community members worried about the way in which Aboriginal corporations are  behaving.”

One such witness was Ramindjeri Elder Mark Koolmatrie, who led calls for the establishment of the inquiry and wants a royal commission or judicial inquiry into the native title regime.

In his public submission, Koolmatrie wrote that he had been “caught out by scammers and toxic people who have come with what looked like good intentions for our people but in actual fact there was a motive of self-gain”.

“I can only today speak of my people with authority, however this is common amongst many communities within South Australia,” he wrote.

Former Arabana Aboriginal Corporation director Fiona Singer told the committee that the native title regime in South Australia was “pretty much unregulated” and “dominated in particular by lawyers, barristers and judges, without necessarily having appropriate mechanisms to ensure that common law holders are engaged in the process”.

“It has allowed certain decisions to be made that haven’t necessarily been in the interests of common law holders,” she said.

Stephens wrote that the committee was “not in a position to make findings of fact or making findings regarding such allegations” and urged witnesses to take allegations to “relevant authorities”.

But he noted that the committee was concerned to hear several witnesses claim the federal regulator – the Office of the Registrar of Indigenous Corporations (ORIC) – had not adequately dealt with their complaints.

“This is concerning, considering the amounts of monies involved (in some cases millions of dollars), the bulk of which may include compensation monies paid by the state as compensation for Native Title determinations,” he wrote.

Despite the concerns, Stephens wrote the committee was also provided with “examples of good governance occurring with Aboriginal corporations and incorporated associations”.

He cited the appointment of a dedicated Indigenous economic development manager at the Whyalla and Eyre Peninsula Regional Development Australia branch as a successful initiative, as well as training programs run within the health services sector.

In his submission to the inquiry, SA Native Title Services CEO Keith Thomas wrote that he had “concerns with what appears to have brought on this inquiry”, noting that South Australia had “a positive record in realising native title outcomes”.

Aboriginal Health Council of SA chairperson Polly Sumner-Dodd added in her submission that she was “saddened by the statements contained in the referral to the Committee regarding perceived shortcomings in the Aboriginal community-controlled sector”.

“Whilst we have great respect for the intention behind this inquiry, problems with poor governance and allegations of corruption are not unique to the Aboriginal community,” she wrote.

“These problems are widespread and it can be seen within other mainstream organisations and even governments, that poor governance and corruption allegations has and is occurring.

“We are unaware of anything more than anecdotal evidence that these issues are more prevalent amongst Aboriginal organisations than others.”

But Stephens noted there were still “sufficient concerns across numerous communities” to warrant change, with the committee making nine recommendations aimed at improving the governance and transparency of Aboriginal organisations.

The committee has also recommended that native title holders be given access to management and expenditure records without having to apply through the Supreme Court.

Other recommendations include establishing a Commonwealth Ombudsman for Aboriginal Corporations, increasing funding to the South Australian Consumer and Business Services to provide governance training to Aboriginal community-controlled organisations, and having the Law Society of SA establish a directory of “honorary advisers” who are willing to give Aboriginal organisations pro bono governance advice. 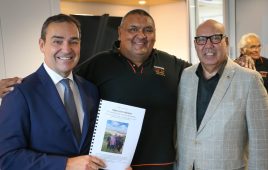 “The Committee considers this vital to providing increased accountability and transparency on public monies making its way into separate trusts established by Aboriginal corporations, which may fall outside of the oversight of the federal regulator,” Stephens wrote.

“It was made abundantly clear to the Committee that self-determination can still be achieved by Aboriginal community-controlled organisations with improved governance practices and greater transparency.

“The Committee heard that it is when this transparency to the community is lost, that the majority of associated disputes may arise.”

In response, a State Government spokesperson said the committee had made “some constructive and practical recommendations in response to the challenging issues it considered”.

“The Government will give the Committee’s recommendations careful consideration,” they said.