As of Sunday, 79.3 per cent of South Australians over the age of 16 have received at least one dose of a COVID-19 vaccine, while 62.5 per cent are fully vaccinated.

When including vaccines administered by the Commonwealth, 23,660 jabs were given out over the weekend compared to an average of 20,314 the past four weekends.

The majority of the increase was recorded on Saturday when 8485 people presented to State Government clinics for a vaccine, a nearly 25 per cent increase on the previous Saturday average.

Sunday’s uptake of 7182 vaccines was less significant but still an increase of 8.91 per cent from the average over the last four weekends.

Meanwhile, vaccination rates in the northern suburbs LGAs of Playford and Salisbury – which have consistently lagged the rest of the state by between 10 and 25 percentage points and raised the concern of authorities and epidemiologists alike – also appear to be picking up pace.

Over the past week, the number of fully vaccinated over-16s in Playford grew by 4 percentage points to 47.2 per cent, according to the latest federal government data.

Fully vaccinated rates in the northern suburbs LGA have, since August 27, only been growing at an average weekly pace of 3.01 points.

If Playford recorded an increase in the number of fully vaccinated by 4 per cent every week, the LGA would reach the 80 per cent doubled dosed milestone around Christmas time.

Its previous average pace only put it on track to reach the milestone by early January.

The percentage of Playford over-16s who this week received a first dose also increased 4.5 points to 66.3 per cent – up from the previous average weekly increase of just 3.54 points.

Nearby, Salisbury has reached 72.9 per cent of over-16s first dosed and 54.3 per cent fully vaccinated.

The state’s other lowest vaccinated LGAs are currently the district council area of Peterborough (48.5 per cent fully vaccinated), the Adelaide Plains (48.7 per cent) and the Mid Murray (49.4 per cent). 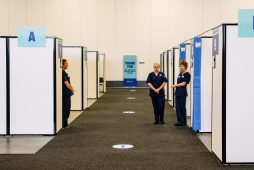 Meanwhile, Burnside is set to become the first South Australian area to clear the 80 per cent double dosed milestone, with the eastern suburb at 79.2 per cent fully vaccinated as of Sunday.

More than 92 per cent of over-16s in Burnside have received at least one dose of a vaccine.