Premier Steven Marshall unveiled South Australia’s “COVID-Ready” plan out of the pandemic a short time ago, saying it was important to “reward” the public after working “extraordinarily hard” over the COVID-19 pandemic.

He said authorities predicted that South Australia would reach its crucial 80 per cent vaccination target on November 23 – earlier than initial estimates – with a raft of restrictions and quarantine requirements to change from that date.

On November 23, border restrictions will be eased, with people who are fully COVID-vaccinated able to enter SA from all states and territories.

However, people will still need to quarantine if they are travelling from local government areas where there is community transmission and less than 80 per cent of the population is fully-vaccinated.

Chief public health officer Professor Nicola Spurrier said the decision was made with a focus not on national “hotspots” but on vaccination rates, which are high in NSW and Victoria.

However, she said there were “a handful of jurisdictions” lagging behind on the rollout from which “people will need to do quarantine”.

Also from November 23, quarantine requirements for international arrivals will fall from 14 days to seven – although it will remain at 14 days for authorised arrivals who are not vaccinated.

Masks will remain mandatory inside public venues and the function cap of 150 people will stay, but the number of people allowed to gather at homes will rise from 20 to 30 people.

Further changes are scheduled once South Australia hits a 90 per cent vaccination take-up for those aged 12 and over, predicted before Christmas.

Once that target is reached, all fully-vaccinated international arrivals will be allowed to enter South Australia without having to quarantine.

International arrivals who are not vaccinated will still need to quarantine for 14 days.

Restrictions on most activities will be lifted and masks will only be mandatory in high-risk settings such as in hospitals and aged care facilities.

Police Commissioner and state emergency coordinator Grant Stevens said the transition committee “haven’t landed on the specifics of post-90 per cent… but the prospects are very good that there will be very limited restrictions, if any”.

SA Health told InDaily this morning that it was unclear when South Australia would reach its 80 per cent double-dose vaccination target for those aged 16 and over, with the projected date changing “frequently”.

The health department said the state was on track to reach the target “sometime in early December”.

Chief Public Health Officer Professor Nicola Spurrier told reporters today it was “a wonderful day to say we can lift those borders with the eastern states”, but conceded it wasn’t clear whether SA will have hit the 80 per cent vaccination benchmark by the reopening date.

“If we haven’t hit it by the 23rd I’m sure we’ll hit it by the week following,” she said, suggesting the date was earmarked to prompt a rush on SA’s vaccination rollout.

“This is a clear message that you don’t have time to wait,” she said. 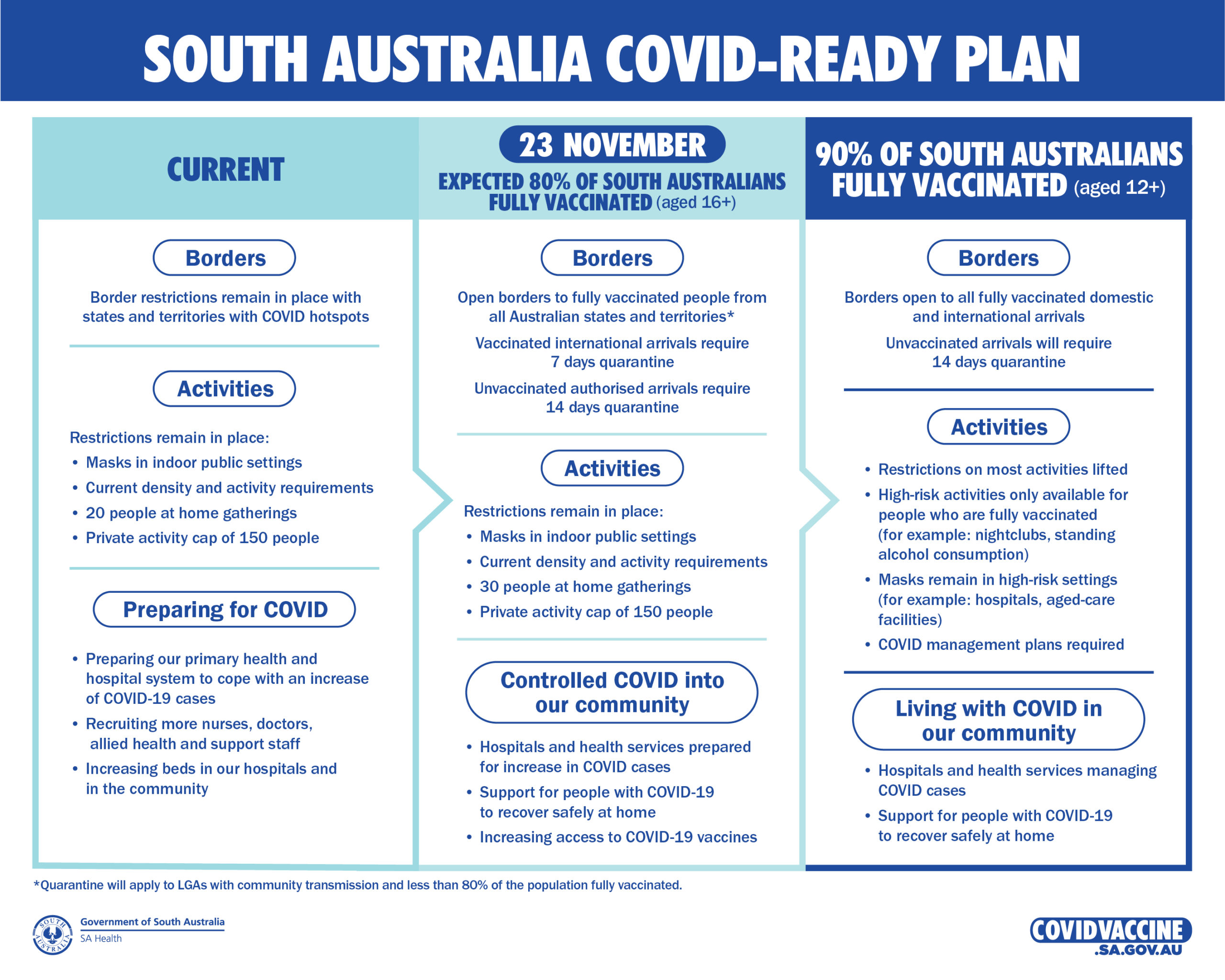 Spurrier conceded “this can be a bit of a scary time for many of us because we haven’t had COVID in our state” previously.

“There’s going to be a level of anxiety out there, particularly for those who haven’t got vaccinated,” she said.

“If you haven’t got vaccinated, you still have time.”

Marshall said the changes would be predicated on a statewide – rather than local government area – vaccination average, but noted “there are some [LGAs] that are lagging behind” and “we’re redoubling our efforts” to improve the take-up in those areas.

“The reality is it’s not a minimum standard – it’s a standard across the state,” he said.

“But you don’t want a situation where some LGAs are at 20 per cent and others at 90 per cent.”

He said authorities would “identify those vulnerable LGAs [and] put in a special effort” to improve their vaccination rollout.

Spurrier said the double vaccination mandate for arrivals would apply to “all states and territories” – even those without that stricture currently.

“If you’re in WA and you want to come into SA, after that date you’ll need to be double vaccinated,” she said.

Spurrier said the decision was made with a focus not on national “hotspots” but on vaccination rates, which are high in NSW and Victoria.

However, she said there were “a handful of jurisdictions” lagging behind on the rollout from which “people will need to do quarantine” if there is community transmission.

Entrants from areas with between 80 and 90 per cent coverage will still need to have a COVID test and isolate pending a result.

“Yes, the border is opening – but we still have some checks and controls in place,” she said.

“The Doherty model showed that when we had vaccination rate of 80 per cent we still need very good contact tracing; we’ve still got our current public health measures and will still need to do the contact tracing.”

The introduction of the 90 per cent vaccination benchmark for future changes to restrictions will change the conversation around SA’s COVID targets and timeline but Marshall insisted “I expect that to happen” – and before Christmas.

He said if someone becomes infected with COVID-19 after the state hits the 80 per cent target, they will still need to get tested and immediately quarantine, with that regime to remain in place “for as long as possible”.

People who are fully vaccinated will also still need to isolate if they come in contact with a positive case.

The COVID-Ready plan is informed by commissioned modelling from the Doherty Institute, with authorities previously saying they would wait until they received the final data before releasing the plan publicly.

Marshall said he expected the modelling to be released – but conceded not all of it had even been received as yet.

“The modelling is in multiple parts,” he said.

“We’re still receiving some, but we didn’t want to delay this announcement today.”