Department of the Premier and Cabinet chief executive Nick Reade, who also chairs the state’s powerful transition committee, this morning said that authorities “haven’t set a timetable” for when they plan to unveil South Australia’s “COVID-Ready” plan, but a release date was “close”.

“There’s meetings this week which will inform the (transition) committee and once we’re ready we’ll announce it,” he told Parliament’s Budget and Finance Committee.

“I couldn’t tell you an exact (release) date because there isn’t one that I’m aware of.”

That is despite state emergency coordinator Grant Stevens telling reporters last Tuesday that the plan would be unveiled within “days” following similar moves by other jurisdictions.

South Australia’s plan is expected to outline when the state will reopen its borders to the COVID-hit eastern states and which restrictions will be lifted once 80 per cent of the state is fully-vaccinated – likely in early December.

Reade told the parliamentary committee that the plan would also outline “how residual risk can be best mitigated without overloading our health system or putting the community at risk” once the coronavirus delta variant makes its way across the border.

Authorities are currently analysing preliminary modelling from the Doherty Institute showing the estimated spike in new coronavirus cases and hospitalisations once the borders are reopened, but they are still waiting on the final data to confirm the COVID-Ready plan.

“We really need that analysis to be complete, which it’s nearing complete,” Reade said, adding he didn’t know whether the modelling would be made public.

“I think it’s important that we’re clear on the assumptions that go into it (the COVID-Ready plan).

“I think the analysis is something that’s going to drive our decisions, so when we talk about the COVID-Ready plan I think it’s very clear that we inform the public of the inputs that we put into the decisions.”

It comes as the Australian Medical Association ramps up pressure on the State Government to release the COVID-Ready plan, arguing doctors need more guidance on when to expect the predicted surge in COVID infections.

AMA South Australian President Dr Michelle Atchison told InDaily that a plan was needed as soon as possible as “COVID could come in tomorrow”.

“The roadmap is well and good and if we’ve got the time to stick to that, fantastic,” she said.

“If we haven’t got the time to stick to it and [COVID] is thrust upon us earlier, well, the sooner we can have those plans out there for the community and doctors the better.”

Data accurate as of Saturday shows 79 per cent of South Australians are partially vaccinated, with 62.3 per cent double-dosed.

The Government hoped to reach 80 per cent single-dose vaccination by the end of the weekend.

The Australian Medical Association does not want to see South Australia reopen until 80 per cent of its adult population is fully vaccinated “plus two weeks”.

We are looking at perhaps our wave of COVID coming, whereas other states have already had theirs

Atchison said the two weeks would ensure all those who are fully vaccinated are properly immunised.

“Our understanding from talking to SA Health last week was they’re still doing the modelling … but likely mid-November for the near the 80 per cent and then early December for 80 per cent plus two weeks,” she said.

But she cautioned that it would be “pretty optimistic” to project South Australia’s vaccination rate could jump from 62 per cent to 80 per cent in the space of three weeks.

“The devil is in the detail of where that 80 per cent lies, and our regional communities are at great risk if they are low,” Atchison said.

“It’s not good enough to just have 80 per cent in the CBD of Adelaide and the surrounding suburbs and low rates elsewhere.

“I think that’s the sort of detail that we’d really like to see.”

Asked why South Australia was lagging behind the majority of other states and territories which have already released roadmaps out of the COVID-19 pandemic, Reade said South Australia was “in a fundamentally different position” to states already experiencing outbreaks.

“We are opening up borders, we’re going to bring COVID into South Australia when it’s highly likely that it would come in with borders coming down,” he said.

“We are looking at perhaps our wave of COVID coming, whereas other states have already had theirs.”

While South Australia focusses on what restrictions it will ease once it reaches the 80 per cent vaccination target, Victoria has already committed to lifting all restrictions once it hits the 90 per cent target – likely in late November.

Reade said South Australian authorities had “not specifically” talked about what will happen once the state reaches the 90 per cent vaccination rate, with discussions predominately focussed on reaching the interim 80 per cent target.

“There’s an extremely large amount of work going into what 80 per cent looks like and the first step in that is the borders are open.

“The deliberations have been more about understanding what happens next and what’s likely to occur both in terms of COVID coming into South Australia and that curve… is very much what we’re trying to understand.

“We’re also looking at various restrictions and what might be able to be eased, but it’s early days in the sense of we really need that (Doherty) analysis to be complete.”

Health Minister Stephen Wade told reporters this afternoon that the Government would “give more clarity in the coming days”. 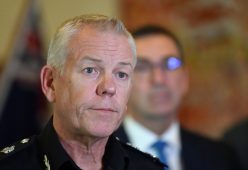 SA's 'COVID-Ready' roadmap to be revealed 'within days'

He said it was his understanding that the Government had “every intention of releasing the modelling”.

“There’s been an active dialogue between our public health team and the Doherty team about what sort of scenarios South Australia might be interested in,” he said.

“When it’s done, it will be released”.

The transition committee will meet tomorrow.