Lea Rebane, the president of the Barossa-based Schubert sub-branch, was slated to be Labor’s candidate in the safe Liberal seat – with the party even taking promotional photographs of her to use in its campaign.

Tony Piccolo, the incumbent MP in neighbouring Light, had previously been preselected for Schubert after a draft electoral boundary redraw gave Labor a hope of snaring the seat, but walked away to recontest his existing seat after the proposed redistribution failed to eventuate.

But InDaily has been told the party’s state executive withdrew its support for Rebane’s candidacy, after discovering she had failed to declare a little-used freelance business on her candidacy application.

A subsequent audit discovered the faint digital footprint of an earlier business and website that prompted the party to reject her candidacy.

Rebane is a Lyndoch-based author, whose 2014 novel It Could Be Forever tells of a fan’s “almost fairy tale” 1970s romance with Partridge Family star David Cassidy.

But it’s believed the state executive’s conjecture was around her registered business name ‘Moon Witch Insights’, which a business search suggests was first established in September 2000 and cancelled in 2019.

However, the decision to ban her candidacy has sparked a backlash from members in the Schubert branch, whose secretary Andrew Dean wrote in a widely-distributed email yesterday that “in light of the rejection of Lea as Schubert candidate for the upcoming state election many members have expressed their disappointment that a great candidate was dis-endorsed over an issue that appears so harmless and trivial”.

“Our President, Lea Rebane, was to be the candidate for Schubert, though following the discovery [that] nearly twenty years ago she owned a business and website with ‘witch’ in the title it was decided that that was far too controversial and she would no longer be endorsed,” Dean said.

He explained that “the business and website were all about female empowerment – which I believe we could use more of”.

“The word ‘witch’ was used in an attempt to reclaim the word from the insult that has been hurled at women for millenia,” he said.

“With this in mind I ask that you voice your disappointment with party headquarters in whichever manner you see fit.”

Dean distributed an email another local member had already sent to ALP state secretary Reggie Martin, “as a guide” for prospective complainants.

I am a long time Labor supporter and been an active member of the Schubert sub-branch for nearly 20 years. I am very concerned about the lack of a candidate representing our local area in the up-coming state election. Our sub-branch has worked very hard over the years to support local candidates and have the Labor voice heard. We have, over the years, had some impact on the voter in this area and with the current climate I believe we can make further inroads. Our demographics are changing and the Labor voice must be heard at this election. Having a local candidate is imperative.

The short campaign Tony Piccolo ran in our community had a huge impact and people here finally were talking about Labor and saw us as a viable and people/issue focussed party.

I understands [sic] the complexities around Lea Rebane’s nomination but she is an energetic, dedicated and committed member of our party. She is a leader who lives by our parties [sic] philosophy.

I ask you and the party to reconsider her endorsement.”

Another email seen by InDaily says Rebane told a recent sub-branch meeting “that her nomination as candidate for Schubert had been turned down due to an old business name that sounded controversial”, with the email’s author noting that “many who had already been aware of this took up a campaign of emailing [party office] to hopefully change this decision”.

“Please write whatever you feel is appropriate for you, and also pass onto others who may be interested [as] many outside our electorate are also writing in regarding this,” the member wrote.

“Someone from Emily’s List [lobby group supporting women candidates] suggested it may be worth mentioning in any communication with Party office that as they get $$$ for each primary vote, there is a risk of losing many of these.

“Mitigation is understandable but it is necessary to weigh up the risks vs benefits.

“We can only see extremely minimal risk to the Labor campaign, as it is a long shot that the opposition would have already investigated *anyone* as no candidate has been endorsed as yet for Schubert.

“The only thing vaguely ‘controversial’ is a very old business name, which means nothing.

“Furthermore, there is absolutely no one else who is being considered for nomination… particularly, no one who understands the community and has the passion and drive for change as the candidate who was rejected for preselection.”

The email continued that “now is an incredible opportunity to gain traction for Labor in Schubert as Tony Piccolo has made substantial inroads and gained much support”.

“There is a significant vibe for change in the community [but] we need to act NOW with the campaign for 2022 as we will lose face and support if we leave this hanging,” it read.

“Further to this, the background in question was about women’s empowerment.” 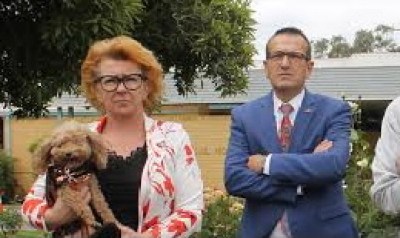 Rebane pictured with Piccolo, from his now-defunct Schubert webpage.

Dean’s own missive to members concluded: “Let’s flood some inboxes with indignation and let’s get Lea endorsed as our candidate!”

However, in a statement to InDaily, Martin said: “Labor is going through the process of preselecting a candidate for Schubert.”

“This particular person [Rebane] expressed interest in running as Labor’s candidate,” he said.

“Labor undertakes an extensive vetting process for all candidates [and] ultimately, this person was not successful in gaining preselection.”

Neither Rebane nor Dean responded to requests for comment.