Police Commissioner and state emergency coordinator Grant Stevens told reporters this afternoon following a “very long and detailed” transition committee meeting that a plan outlining the state’s roadmap out of the pandemic is “days away”.

But he said that authorities were still waiting on the Doherty Institute to hand down final modelling showing South Australia’s projected COVID-19 caseload once it reopens its borders to virus-hit eastern states, and until then, the “finer details” of the plan were unable to be nutted-out.

It comes after Queensland yesterday released its roadmap out of the pandemic announcing that fully-vaccinated people from Victoria, New South Wales and the ACT would be allowed into the state without having to quarantine from December 17.

South Australian Premier Steven Marshall has previously pledged to reopen the state’s borders and relax internal restrictions before Christmas, but he has not given a specific date for when he plans to do so.

Stevens told reporters today that authorities had been considering over the past few weeks a “COVID-Ready” plan for South Australia that was “imminent”.

“This is when we hit that 80 per cent (vaccination) target, we open up our borders to other states and territories in Australia and the inevitable consequence of that is that we will see COVID-19 seeding into our community,” he said.

“The task now is to make sure we’re prepared for that, that the healthcare system is capable of managing that, and that we have a range of measures in place that make sure all South Australians get through that transition from being virtually COVID-free to having COVID as part of our community.”

Steven said he couldn’t provide a specific date for when authorities would reveal the plan, with that date dependent on when the Doherty Institute handed down its modelling.

“When I say days it doesn’t mean within seven days,” he said.

“I’m confident we’ll have something locked away soon, but I’m not putting a timeframe on it.

“It’s sooner than later and I know people want to see what that looks like so we’re keen to get it out.”

Asked why South Australia had taken longer than the other states to announce its roadmap out of the pandemic, Stevens responded “that’s a good question”.

“I’d just reflect on our management of COVID-19 in South Australia over the last 19 months,” he said.

“We’re carefully considering the modelling, the evidence that’s available to us and we’ll make a considered decision on the basis of that evidence.

“I can’t say that happens in other jurisdictions – I’m not privy to what they do – but I’m very satisfied that there is a well thought-out and properly developed plan for South Australia.”

The state emergency coordinator, who has the ultimate say over when South Australia will reopen its borders and lift restrictions, said he was unable to provide detail on what the plan would include, but hinted that South Australians who are not fully vaccinated once the state reaches its 80 per cent target could remain restricted.

“There will be distinctions in terms of how people are managed if they’ve been exposed to COVID based on their vaccination status,” he said.

“People who are double-vaccinated will probably have more latitude in terms of their quarantine requirements if they are exposed as a close contact compared to people who are not vaccinated – that’s simply a reality going forward.

“It’s another reason why people should think about getting the vaccination – it will give them more freedoms if they are identified as a close contact.”

Authorities have received preliminary modelling from the Doherty Institute, which has informed their discussions about the plan thus far, but Stevens said until the final figures are “locked away and been verified” they won’t make any decisions. 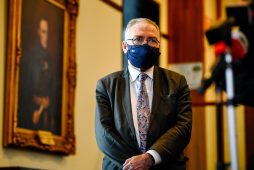 “That should happen in the next day or so,” he said.

Stevens said until South Australia reaches its 80 per cent double vaccination target for people aged 16 and over – likely at the beginning of December – the current level of restrictions would likely be maintained.

Latest federal government data shows 59.4 per cent of South Australians aged over 16 are fully-vaccinated, while 76.7 per cent have received at least one dose.