The health department confirmed the state now has 22,327 active cases.

Melbourne will emerge from its latest lockdown as it reaches 70 per cent double-dose vaccination coverage in people aged 16 and up.

But some restrictions will remain, including outdoor dining in order to limit the spread of the virus.

Victoria will also move away from hotel quarantine for fully vaccinated international arrivals, instead moving towards home quarantine.

Premier Daniel Andrews has also confirmed the government will not lock down the entire state in future and instead opt for targeted restrictions in “very narrow circumstances”.

From 11.59pm on Thursday, all restrictions for leaving home will be dumped along with Melbourne’s city’s nightly curfew. Up to 10 visitors will be allowed in a home per day, but retail and gyms in metropolitan Melbourne have to remain closed.

Hairdressing and beauty salons can open for up to five fully vaccinated people at a time, while pubs, clubs and entertainment venues will be able to host 20 fully vaccinated customers indoors and 50 outdoors.

Meanwhile, NSW has reported 265 new locally acquired cases of COVID-19 and five deaths as thousands of children head back to school and more restrictions are eased for fully vaccinated adults.

There are 606 people in NSW hospitals with COVID and 132 in intensive care.

Local cases of COVID-19 continue to track downwards in NSW as children return to school but Premier Dominic Perrottet cautions there will be a resurgence as restrictions ease.

“This is not over. There’s a long journey to go,” he said on Monday.

After announcing last week the scrapping of hotel quarantine for fully vaccinated international arrivals from next month, the premier said NSW was “leading the nation out of the pandemic”.

“We are well positioned to help all Australians around the world come home and we want to get tourism back,” he said.

However, Perrottet acknowledged case numbers and hospitalisations were expected to increase again in the coming weeks, with targeted restrictions reintroduced if necessary.

“As mobility increases across the state, case numbers will increase,” he said.

“That will be a challenge for our state but our health system is very strong.”

More than 80 per cent of people in NSW over 16 are now fully vaccinated, which on Monday triggered a second-stage easing of restrictions.

At least one dose of the vaccine has been given to 92 per cent of adults.

Hobart and southern Tasmania are exiting a snap lockdown as scheduled, but some extra precautionary COVID-19 restrictions will remain.

Premier Peter Gutwein confirmed the three-day lockdown would end at 6pm on Monday after the state reported no new cases from more than 1463 tests.

But masks will remain mandatory until at least 6pm on Friday, along with restrictions for aged care facilities and hospitals.

“We are snapping back to where we were apart from those restrictions,” Gutwein said on Monday.

The “minor” measures will be reviewed later this week.

The premier hopes the lockdown will be the state’s last before reopening to COVID-hit mainland states once it hits higher vaccination coverage.

The island state’s south region was plunged into a 72-hour stint of stay-at-home restrictions on Friday evening after an infected NSW man absconded from the Hobart Travelodge and spent about 18 hours at large.

The 31-year-old, who arrived in Hobart on Monday night without a valid border pass and was ordered into quarantine, has refused to co-operate with contact tracers.

The inability of authorities to establish his exact movements was cited as the main reason for the lockdown.

Australians will take a step closer to safe overseas travel on Tuesday, with the release of certificates to provide international proof of vaccination status.

The proof of vaccination will be available to Australian passport holders and Australian visa holders who have their COVID-19 vaccinations recorded on the Australian Immunisation Register, government ministers said in a joint statement on Sunday night.

“The international proof of vaccination features a secure QR code to prove COVID-19 vaccination status to border authorities around the world and increases a person’s ability to travel safely and with confidence,” they said.

The proof will enable fully vaccinated Australians to depart Australia and travel internationally consistent with the National Plan to transition Australia’s COVID-19 Response.

It can be downloaded digitally or in printed form and is compatible with COVID-19 travel apps such as the International Air Transport Association (IATA) Travel Pass.

The federal government has announced that international travel restrictions will start to ease from the beginning of November for fully vaccinated Australians.

Some countries will require proof of vaccination from Australians while others will not.

The ministers said the Visible Digital Seal technology within the international proof of vaccination is world-leading and as secure as an Australian passport.

“The launch of the international proof of vaccination is a key step towards safely reopening international borders and supporting Australia’s COVID-19 economic recovery.”

Applicants can get the free international certificate by using their Medicare account through myGov, or the Medicare Express app.

In South Australia, a trial is underway allowing people an easier way to show their vaccination status ahead of the state hitting its target to open its domestic borders.

As of Sunday, more than 58 per cent of South Australians over the age of 16 have been fully vaccinated, and more than 75 per cent have received their first dose.

Fifty people are now taking part in a three-week pilot test of VaxCheck, a function inside the mySA Gov app that should eventually allow people to show their vaccination status and check-in to a venue through the same app.

Currently, digital vaccination certificates are available through myGov and the Express Plus Medicare app, which generate certificates that can be saved to a smartphone wallet.

Premier Steven Marshall said the pilot test “will ensure that the process is secure and convenient and that we are ready when the time comes to reopen our state in the safest way possible”.

Marshall wants the state to reach 80 per cent double vaccination status before opening domestic borders, a target it is on track to hit in December.

A similar function allowing people to check-in and confirm vaccination status was added to the Service NSW app on Friday, but Marshall said his state won’t be following a NSW plan to allow vaccinated international travellers who test negative for the virus to avoid quarantine at this stage.

Deputy Prime Minister Barnaby Joyce insists the Nationals will not rush a decision on backing a Morrison Government plan to cut carbon emissions, with some MPs still unconvinced.

A four-hour partyroom meeting on Sunday failed to yield an agreement from the junior coalition partner to back the government’s net zero by 2050 plan.

Prime Minister Scott Morrison is under intense pressure to take a credible net zero by 2050 plan with him to COP26 climate talks in Glasgow later this month.

Joyce said some of his Nationals colleagues had unanswered questions about the cost of stronger emissions reduction targets for regional economies.

“This is not something that is going to happen in a great rush. We’re going to make sure it’s a diligent process,” he told reporters in Canberra on Monday.

Some reports suggested the Nationals were asking for a regional assistance package of up to $20 billion in return for supporting a net zero goal.

But Joyce downplayed the price tag.

“I’ve heard numbers but I don’t know where these numbers come from,” he said.

“It’s not about a number, it’s about an outcome.” 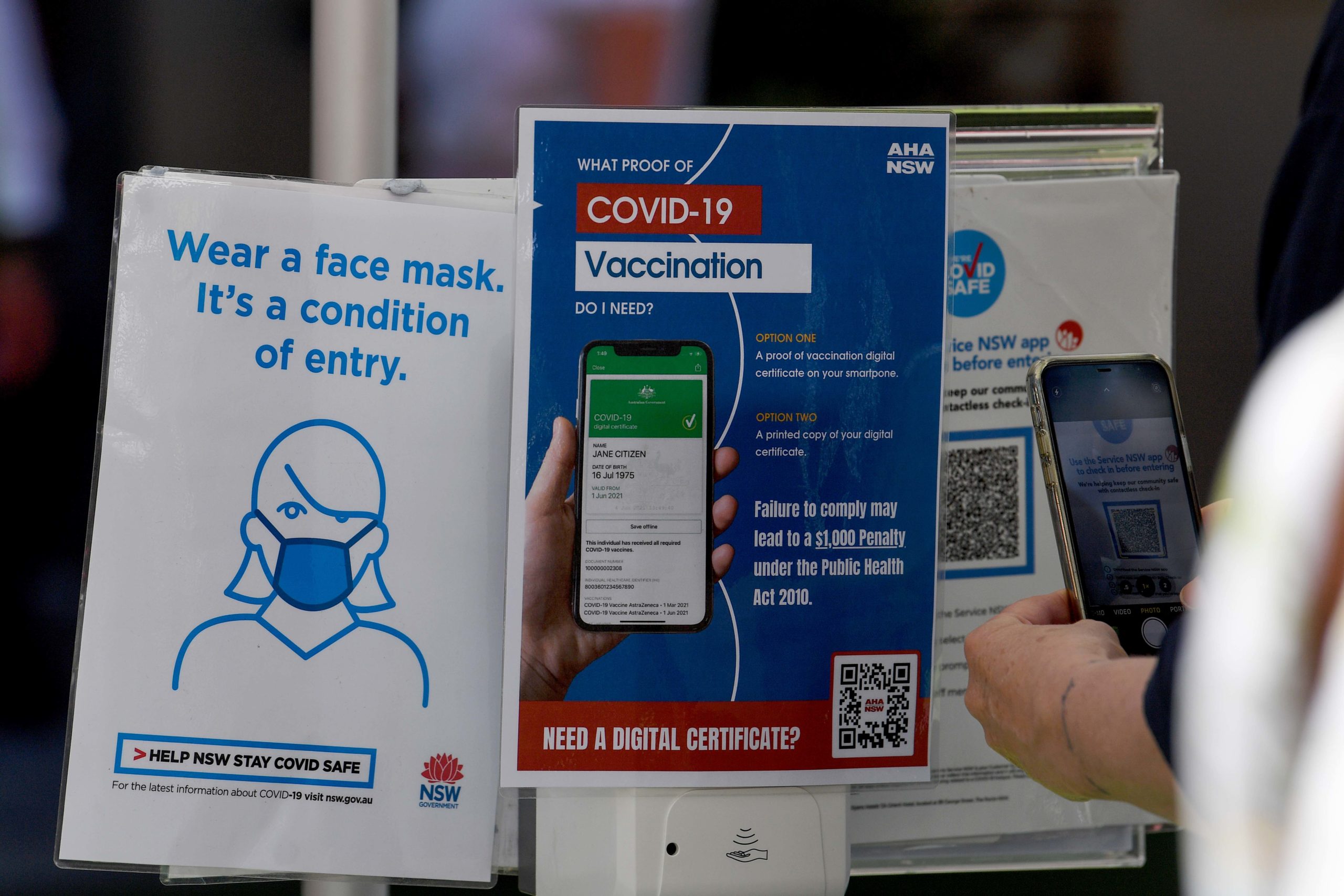 NSW has reached its target of 80 per cent full vaccination for people aged over 16, clearing the way for a further easing of restrictions. Photo: AAP/Bianca De Marchi

Thousands of children in NSW are heading back to school for the first time in months as a swathe of COVID-19 restrictions are eased for full vaccinated adults.

More than 80 per cent of people over 16 are now fully vaccinated in NSW, triggering a promised second stage easing of restrictions as the state emerges from nearly four months of lockdown.

A week after stay-at-home orders lifted and fully vaccinated people were allowed back at NSW pubs and beauty salons, people who have received two doses of a COVID-19 vaccine are now free to play community sport and have a dance at the pub, and are allowed to do it with larger groups of people.

Students in years 12 and one, as well as kindergarten kids, are returning to classrooms, ahead of other grades who will return next week.

NSW Premier Dominic Perrottet said there will be “teething issues” with the return to school “but those challenges do not outweigh the importance of getting kids back in the classroom”.

Outdoor gatherings of up to 50 fully vaccinated people are now permitted, and up to 20 visitors are allowed in a home, provided everyone over the age of 16 is vaccinated.

NSW residents can once again stand up while drinking and even have a dance in most hospitality venues, but not yet in nightclubs, which are allowed to reopen so long as people sit down while they drink and don’t dance.

There’s no limit on weddings and funerals and the five-person cap at hairdressers and beauticians is also gone.

Office workers are no longer required to wear masks at work, but they’re still required in other indoor areas such as on public transport or in a retail shop.

NSW Customer Services Minister Victor Dominello stressed the new freedoms were only for the fully vaccinated but will be expanded to the unvaccinated in December.

Victoria will emerge from lockdown from midnight on Thursday – earlier than previously predicted – with the state set to hit its 70 per cent double-dose target.

The corruption inquiry that prompted former premier Gladys Berejiklian’s shock resignation is set to begin testing the allegations against her, with another former premier and a current government minister among the first to give evidence.

Berejiklian announced her resignation after the state’s corruption watchdog disclosed the 51-year-old – premier from early 2017 – was under investigation for potential breaches of public trust.

Berejiklian denied wrongdoing but said she had no choice but to resign. She is also leaving state parliament.

ICAC is investigating whether Berejiklian “exercised public functions” in a position of conflict given her secret five-year relationship with disgraced former MP Daryl Maguire, which she admitted during hearings into his conduct in October last year.

It will probe whether she broke the law by failing to disclose her relationship with the former member for Wagga Wagga and whether she “was liable to allow or encourage” his conduct.

Berejiklian’s role in grant funding awarded to two projects in his electorate in 2018 will also be investigated.

Multi-million dollar grants were given to the Australian Clay Target Association in 2016/17 and to the Riverina Conservatorium of Music in Wagga Wagga in 2018.

Neither Berejiklian nor her ex-partner Maguire will appear before the ICAC in the first week of hearings centred on their secret relationship.

First up on Monday is Director at the NSW Office of Sport Michael Toohey, who has also worked for the Department of Premier and Cabinet.

Former bureaucrat turned NSW Rugby boss Paul Doorn will take to the witness box on Tuesday, having worked in similar roles during the period under scrutiny.

The hearing is expected to run for about 10 days and will be overseen by ICAC Assistant Commissioner Ruth McColl SC.

Maguire is accused of abusing his public office and improperly gaining a benefit for himself while serving between 2012 and 2018 as MP.