The 2015 recruit, who was third in Sydney’s best and fairest after a breakout year, had become a major focus of the AFL’s trade period, which winds up tonight.

The Crows and Swans had haggled for days about his worth, with the prospect of a trade falling through and Adelaide hoping to snare Dawson in the preseason draft, where it holds the fourth pick, looming large.

But an eleventh-hour deal has been done to send a future first-round pick, tied to the Melbourne Demons after an earlier pick swap, to Sydney in exchange for the exciting wingman.

The 24-year-old, who has played 64 games for the Swans, wanted to return to SA for family reasons.

The Swans offered Dawson a five-year deal to remain in the harbour city, but he was set on playing for the club he supported growing up.

Paperwork to finalise the trade was lodged this afternoon. 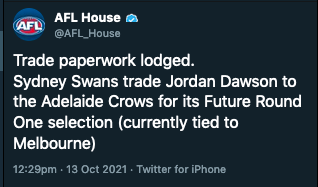 Crows general manager list management and strategy Justin Reid described Dawson “one of the most promising young players in the competition who is entering the prime of his football career”.

“We are pleased to have completed the trade with Sydney and that Jordan has the opportunity to play in front of his family and friends next year and beyond,” he said in a statement.

Adelaide senior coach Matthew Nicks said Dawson would be an important addition to the team.

“Jordan is able to play a variety of roles and his elite foot skills will complement our style of play nicely,” Nicks said.

“We are looking forward to getting to work with him when pre-season begins, as we build on the progress we have made as a team over the past two seasons.”