Marshall told reporters he had this morning met with SA Health chief executive Dr Chris McGowan and chief public health officer Professor Nicola Spurrier “and we’ve been able to very much get on the same page with regards to this matter so everything I said previously is exactly the situation”.

“People can expect a normal Christmas in South Australia,” he insisted.

“For the vast majority of people trying to get back they will be able to come back. There may be some testing requirements on arrival.”

Marshall said “it doesn’t mean that there won’t be some people that might need to have some quarantine for example if they’ve been in a designated hotspot or maybe they have been to an exposure site”.

“All of those details are still being worked through but for the vast majority of South Australians they will be able to definitely be coming into South Australia for Christmas,” he said.

Marshall’s comments – echoing those he made last week – come after McGowan yesterday told parliament’s budget and finance committee that he wasn’t aware of any health advice suggesting people coming here from interstate for Christmas wouldn’t need to quarantine.

“That’s not our expectation that there will be no quarantine requirements even for double vaccinated people at this stage,” he said.

McGowan said he hadn’t provided the Premier with any such advice.

Marshall this morning rejected suggestions he had jumped the gun in making his comments last week and denied there was mixed messaging about what people could expect.

“I think we were on the same page and I’ve made it very clear right from day one – we need to get to that 80 per cent double vaccinated 16 and over and as soon as we are doing that we can end the punishing state lockdowns and also end those punishing state lockouts,” he said.

“I think what Dr McGowan was referring to is that there are still going to be situations where people who may have been to an exposure site or a very dangerous setting or cluster interstate they may still have some quarantine requirements.

“So we’re looking forward to welcoming people back into South Australia for Christmas but we’ve got to get to that 80 per cent double vaccinated of those 16 and over first.”

Asked if he had liaised with SA Health before making his comments last week, Marshall said “absolutely”.

“We’ve got a very close working relationship obviously with Professor Spurrier and Dr McGowan and the entire SA Health team,” he said.

Marshall said when he met with McGowan this morning, the health boss had “clarified” his comments from yesterday “and we are 100 per cent on the same page”.

“We want this to be as normal a Christmas as it possibly can be,” he said.

Asked if people should start booking flights now from interstate, Marshall said: “I think that people need to recognise that there’s probably still going to be some flexibility required but I think they should have great confidence to book flights back to South Australia as long as they’re double vaccinated.”

Marshall said the situation was improving interstate as vaccination rates increased and “we’re not talking about lifting that border restriction this week or next week, we’re talking about doing it before Christmas”.

“So I think people should have great confidence that they will be able to enjoy time with their family members returning to South Australia at Christmas,” he said.

“There may be some testing requirements on arrival. And of course there, from time to time, will be exemptions if people have been to a designated hotspot.”

McGowan also told the committee authorities were working behind the scenes to adequately prepare South Australia’s healthcare system for the arrival of Delta.

He said the system had capacity for 107 extra beds right now, if needed, and that authorities were planning on a worst-case scenario of needing about 300 beds.

Asked today where those extra beds would come from, Health Minister Stephen Wade said: “In the last couple of weeks I’ve announced an additional 60 beds in terms of inpatient capacity. At each of those announcements I’ve indicated there’s more to come. There is more to come.”

Chief public health officer Professor Nicola Spurrier yesterday told reporters it was “too early to say” exactly what arrangements would look like for people wanting to come into SA from interstate for Christmas.

“What I’m saying is it’s a little bit too early to tell what the disease rates will be looking like at different parts of NSW and Victoria,” Spurrier said. 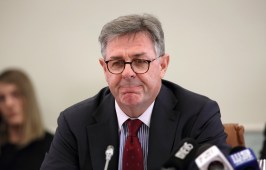 In a statement today, McGowan said “South Australia is working to the national roadmap which includes the opening of borders by Christmas”.

“As the Premier has stated, some restrictions may continue to apply for individuals coming from areas of extreme risk,” he said.

“The nature of these specific requirements will be reviewed in the lead up to the easing of border restrictions.”