InDaily first flagged last December the prospect of Bedford contesting the state’s most marginal Liberal-held seat of Newland, with the MP expected to confirm her intentions over the weekend.

Last year’s electoral boundaries redistribution shifted a significant chunk of her Florey electorate – which she retained as an independent after serving there as a Labor MP since 1997 – into neighbouring Newland.

Liberal whip Richard Harvey has held the north-eastern suburbs seat since the 2018 poll, and will go to the March election with a slim nominal margin of just 0.2 per cent.

Bedford, who did not comment today, has spent the past year canvassing the views of her electorate about which seat she should contest, with sources telling InDaily she has now made a decision and is expected to make a public announcement over the weekend.

Labor insiders are increasingly confident that decision will see her contest Newland, particularly after she recently began letter-boxing constituents in the seat with a rebranded logo that eschewed any mention of Florey, and simply read: “Frances Bedford: Independent State MP”. 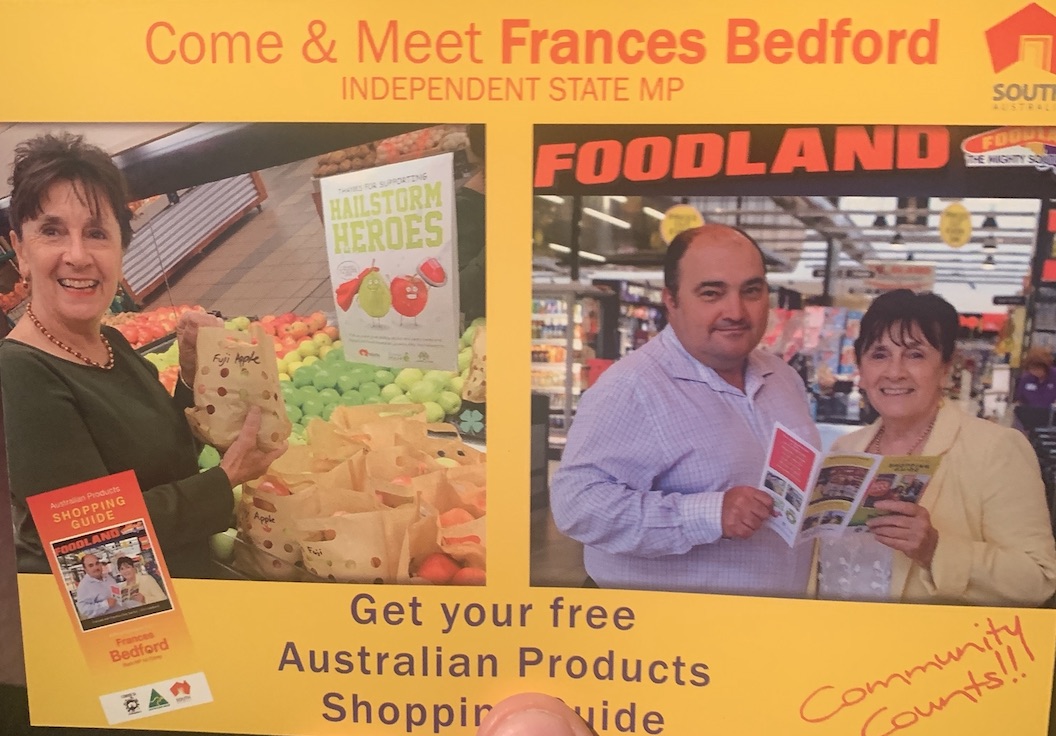 The redistribution saw around 12,000 voters from neighbouring Playford shifted into Florey, which in turn lost around 3000 electors to Enfield and another 4000 to Newland.

But that latter contingent includes the suburbs of Modbury and Modbury North, the latter of which contains Bedford’s electoral office.

The area also contains Modbury Hospital, improvement to which has been a major policy focus for the MP for several years.

A switch to Newland would throw the seat into chaos, with at least three candidates likely to poll strongly, after the ALP recently preselected Tea Tree Gully councillor Olivia Savvas as its candidate there.

The move will force the Liberal Party to further bolster its Newland campaign, with its resources already likely to be stretched by an unforeseen campaign against ex-Liberal Sam Duluk in Waite and, potentially, Fraser Ellis in Narungga.

The Marshall Government is already in effective minority after the loss of Sam Duluk and Fraser Ellis to the crossbench, and a move to Newland by Bedford would gift Florey to Labor while likely giving either Labor or Bedford the upper hand in Newland – a must-win seat for the Liberals.

Potentially further complicating matters though is the looming likelihood of a concerted campaign there by a revitalised Family First party, which was recently revived by Labor defectors Jack Snelling and Tom Kenyon.

Kenyon was the last Labor MP to hold Newland, having occupied the seat from 2006 to 2018.

The contest could have added spice given Snelling’s 2017 move against Bedford, when he performed a seat swap of his own, moving from his Playford electorate to snare Labor’s Florey preselection after a similar redistribution the previous year.

That move prompted Bedford to quit the party and run as an independent, before Snelling promptly resigned from the ministry and left parliament altogether.

Bedford subsequently retained the seat as an independent.

Kenyon told InDaily the new Family First was still awaiting its registration to be processed by the Electoral Commission and “we haven’t got that far yet” to consider a candidate for his former seat.

However, he added: “We’ll get someone solid in there.”

“It’s an important seat,” he said.

He insisted he was unlikely to recontest it himself “unless people feel that’s the absolute best way for me to contribute”.

“It’s not likely… but I’m very wary of ruling anything out,” he said.