“Any significant changes to public activities will require a continued uptake of the vaccination rollout,” Stevens told reporters.

“So we are keenly watching just how many people in South Australia are being vaccinated at least with that first dose.”

According to the latest Federal Government data, correct as of Sunday, 66.1 per cent of South Australians over 16 have had one dose of a COVID vaccine, while 47.8 per cent are fully vaccinated.

Stevens said the transition committee would first look at easing restrictions once the state reaches 70 per cent coverage.

“I think the first milestone we’re aiming for in terms of being able to have a look at some of these restrictions we have in place is probably 70 per cent – I wouldn’t imagine that’s going to be dramatic,” he said.

“And then of course, the target that’s been spoken about for quite some time is 80 per cent … that’ll give us some latitude to look at relaxing some border restrictions as well as what it means for public activities in South Australia.”

Burnside on Monday reached 82.2 per cent first dose vaccination coverage, with 63.9 per cent of over-16s in the area fully vaccinated.

Only the district council of Orroroo/Carrieton in the state’s mid north has reached the same 80 per cent milestone, although the regional LGA has only around 700 residents over the age of 15 compared to roughly 40,000 in Burnside.

Elsewhere, the other leading South Australian LGAs by vaccine uptake are:

But the rollout remains unevenly distributed, with some of Adelaide’s northern suburbs 20 to 30 points behind the state’s leading LGAs.

Similarly, only 57 per cent of residents in Salisbury, which has more than 110,000 people over the age of 15, have received a first dose.

Stevens said discrepancies in the rollout have been a “topic of conversation” at transition committee meetings.

“SA Health are doing as much as they can in those areas of low take-up to make [the vaccine] as accessible as possible and to communicate with those communities to make sure that they understand the opportunity is there,” he said.

Asked whether an uneven vaccine rollout could disrupt South Australia’s plans to reopen at 80 per cent jab coverage, Stevens said: “It’s certainly something that we’ll have a look at in terms of what it means for risk to South Australia.”

“It needs to be considered in the context of our health system being able to accommodate COVID-19 being in our community,” he said.

“If we do have these pockets that have got low take up of the vaccinations, we need to understand that that’s not creating additional risk for other South Australians who need to access health services.”

Stevens said SA Health was undertaking modelling based on the situations in the eastern states to determine how and when to ease restrictions in South Australia.

“I’d ask for people and different sectors within the business community in South Australia to continue to have patience that the work that is being done now is up to date, accurate modelling based on what’s happening in New South Wales, Victoria and the ACT assessing the impact of the changes they’re making based on their vaccination rates,” he said. 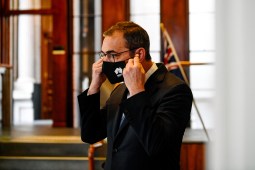 SA to wait for vaccine 'equity' before opening borders

“We want to make decisions that are based on accurate modelling and the most up to date current information as possible.

“That work is being done and we will provide clarity as soon as we possibly can.”

South Australia recorded no new COVID-19 cases on Tuesday. There are three active cases in the state.