Lander told parliament’s Select Committee on Damage, Harm or Adverse Outcomes Resulting from ICAC Investigations that its chairperson and SA Best MLC Frank Pangallo should “recuse himself from the further participation in this committee because of a perception of bias may be considered to arise”.

Reading from a prepared 100-page statement, Lander, who was South Australia’s first ICAC from 2012 to 2020, said Pangallo should step down because he “actively campaigned” for the establishment of the committee and had publicly criticised the ICAC for its handling of past investigations.

His evidence comes after both houses of state parliament last week swiftly and unanimously passed a bill introduced by Pangallo to clip ICAC’s wings, with the office now only given jurisdiction to investigate matters of serious and systemic corruption.

Under the reforms – which passed both houses in less than 24 hours – misconduct and maladministration will be restricted to the State Ombudsman, with the Office of Public Integrity moved out of the ICAC’s jurisdiction.

The laws, which were prompted by recommendations from a separate parliamentary committee chaired by Pangallo, also establish an independent Office of the Inspector to replace the current ICAC Reviewer – with “enhanced powers of review and oversight of ICAC”.

Lander has strongly criticised the reforms, telling InDaily previously that the laws “will set back the anti-corruption cause in South Australia”.

He loaded criticism on Pangallo today, saying it was inappropriate that the crossbench MP was chairing a committee set up to scrutinise his former office.

“I should assume that this committee and all of its members intend to act fairly,” the former federal court judge said.

“The chairperson of this committee, the Honourable Mr Pangallo MLC, is a person that a fair-minded observer might reasonably apprehend might not be able to bring an impartial mind to the question and therefore Mr Pangallo should, in my submission, recuse himself.”

When he stepped down from the anti-corruption role last year, Lander left a legacy of significant cases that have petered out in court.

The former federal court judge led a drawn-out case against ex-transport official Michael King, which resulted in a $5000 fine, while charges against others caught up in the matter were withdrawn, in what one of the accused’s counsel described as “an absolute mockery of the justice system”.

During this morning’s committee hearing, Lander read out past public statements made by Pangallo in which the MP criticised the ICAC for its handling of the investigations.

He said the committee should replace Pangallo with “anyone you like, but not someone who has prosecuted the case for the creation of the committee”. 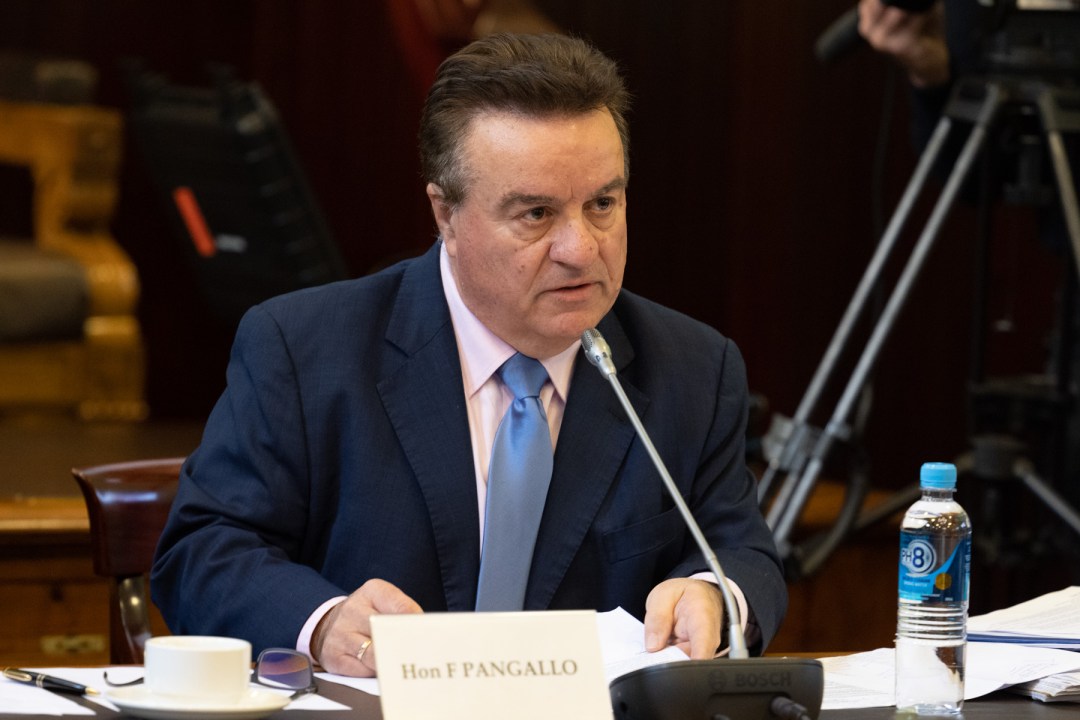 Pangallo said he set up the committee after hearing from “aggrieved people… seeking redress for problems they experienced”.

“This is parliament Mr Lander – not a courtroom – and you’re putting me on trial today,” he said.

“Even your comments last week after that legislation passed indicated to me that you had a bias towards me and the parliament.

“We were accused last week of essentially being a protection racket for crooked politicians and police officers.”

Lander responded: “I’m not sure what your point is”.

“The point is that you and others were hurling accusations at us, which appear to show some bias against Members of Parliament,” Pangallo said.

“I think it’s absurd to think that I would get up in parliament and ask the members of the Legislative Council to consider setting up a committee without giving them the information, the reasons why I was setting up that committee.

Earlier during the hearing, Lander accused committee members of acting “unfairly” after they said they would prefer to hold the hearing in camera and out of public view.

Pangallo said the hearing needed to be held in camera, as people previously under investigation by the ICAC might suffer “considerable psychological damage” hearing Lander’s evidence.

“I do not wish to cause them any further psychological damage,” he said.

The committee eventually agreed to hold an open hearing, but warned it would go into confidence if Lander spoke about specific individuals.

Pangallo said after the committee hearing that he had “absolutely no intention of recusing myself as I have no reason to do so”.

“What we saw today by Mr Lander strikes at the very foundations of our democracy – asking a person to excuse themselves from a Committee because the probing questions that person continues to ask are uncomfortable for the witness to handle,” he said.

“Mr Lander’s comments today are an insult and disrespect to the Parliament and its processes.”