In a series of research papers released today, SACES found that the net migration of people moving to South Australia fell from 16,630 in 2019 to 4410 last year, largely due to international border closures.

The pandemic-induced border closures also prevented international students from entering South Australia, a number of whom traditionally stay on as residents and workers after graduation.

Student visas declined by about 55 per cent in 2020 and the ripple effect on students who would now otherwise be on years two and three of their visas will be felt into the future.

The State Government has spruiked the turnaround in net interstate migration into the positive for the first time in 30 years.

But this gain – of just 98 people in 2020 – will take years to make up for the 8000 mostly young South Australians lost to interstate in 2018 and 2019 and pales in significance compared to the thousands of mainly skilled migrants usually brought in from overseas each year.

Net overseas migration in South Australia is dominated by people aged 25 to 44 years, meaning that their absence has helped the average age of the state’s population gain even more pace.

The flipside of this is that the ageing population is likely to create plenty of jobs. 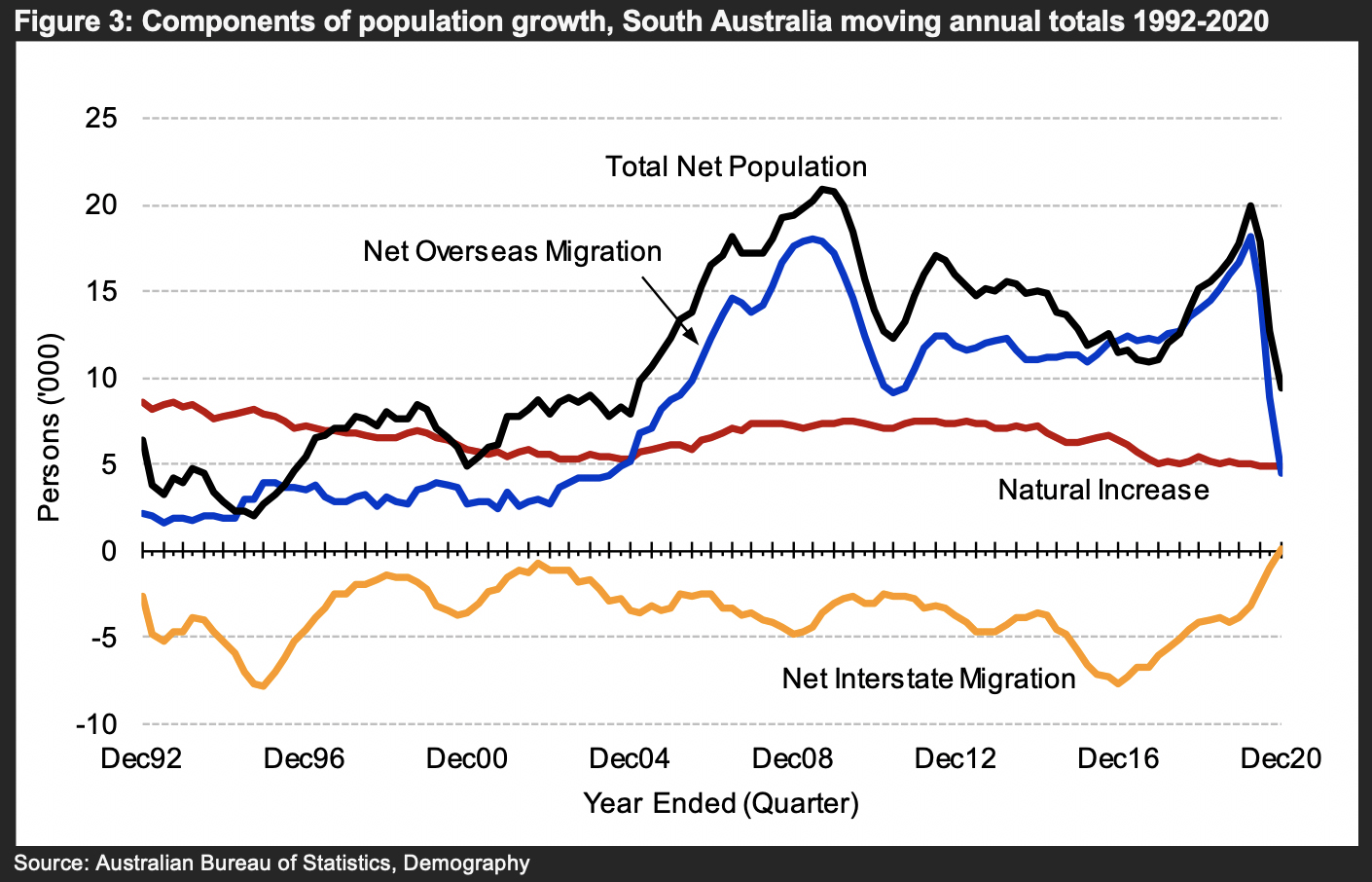 SACES estimates that on average from 2010 to 2020, for each 1000-person increase in the population aged 65 and over, there were on average 240 jobs created across the five sectors most closely related to health.

“The outlook is for growth of at least another 30,000 jobs in health, aged and disability care, and associated personal and other services, with increased qualifications and higher pay rates, by 2030,” it said.

The research was undertaken on behalf of the SACES Independent Research Fund, a group of key private and public sector individuals that sits under the umbrella of SACES.

“It is important to get the balance right between encouraging overseas migration and supporting our young people because skilled migrants tend to put downward pressure on wages and reduce the responsibility of local businesses to provide training to local staff,” he said.

“As the world emerges from the COVID crisis, and people start moving again, South Australia’s enviable position in terms of healthcare, education, housing value and lifestyle should prove very attractive to potential interstate and overseas migrants.”

While that sounds promising for the future, employers struggling to find and keep skilled staff are looking for more immediate answers.

Unemployment figures released by the ABS last week showed SA’s jobless rate in August was 5 per cent, slightly up on July’s 10-year low figure of 4.7 per cent.

However, more detailed ABS labour force data released yesterday shows that unemployment in the Central Adelaide and Hills region, which is predominantly made up of skilled workers in the eastern suburbs, was just 2.4 per cent in August.

This is compared with 5.7 per cent in the northern and southern suburbs, where there are traditionally more unskilled workers.

In country areas, the skills divide appears even greater with unemployment in the Outback region that takes in the north of the state, Eyre Peninsula and the regional cities of Port Augusta, Whyalla and Port Lincoln, hitting 10 per cent in August.

SACES says increasing the participation rate could offset labour shortages in the short to medium term particularly while net overseas migration remained low in the next few years.

But it says population growth in South Australia will remain reliant on the resumption of overseas migration, which was the largest source of overall population gains in the 15 years before the pandemic.

“Its importance will only grow in the future given the expectation that gains from net natural increase will decline and eventually reverse as deaths rise and births remain broadly static or decline,” the report concludes.

“In the interim, there needs to be a much closer examination of employment prospects for young people to support retention of the young and qualified in South Australia and much greater attention to reducing the rate of long-term unemployment for all age groups.”

O’Neil said there were a number of policy initiatives that could encourage population and employment growth as the state emerged from the economic and social challenges imposed by the coronavirus pandemic.

“Reversing and maintaining the current trend in net interstate migration is a key public policy priority that can be partially achieved through much faster job creation in high value-added sectors. Paid commencement internships and payroll tax support are possible policy levers in this regard,” he said.