During a parliamentary committee hearing this morning, Department for Infrastructure and Transport chief executive Tony Braxton-Smith confirmed three signalling technicians from New South Wales had been granted permission by SA Health earlier this month to enter the state as essential travellers.

The workers were brought over to work on the Gawler rail electrification project – a $715 million state and federal-funded project that is behind schedule due to COVID-19 related delays.

The decision to approve their travel exemptions has been strongly criticised by the state opposition, who last week accused the Government of prioritising interstate workers over about 7000 South Australians who are stuck in coronavirus-hit eastern states and are desperate to return home.

But Braxton-Smith today said it was necessary to bring the technicians to South Australia to ensure work on the rail electrification project, which currently employs about 200 people, could proceed.

He said the three workers had “competencies and certification for highly specialised tasks” including testing signals along the rail line – skills which only about five people in Australia possess.

The department chief said travel exemption applications for the workers were initially lodged in July and had “suffered repeated delays and repeated requests for further information”.

He said he wrote to deputy chief public health officer Dr Emily Kirkpatrick on August 29 seeking clarification, as the delay “was starting to have a substantial potential impact on the whole of the workforce”.

Braxton-Smith said he heard back from SA Health “a couple of days” after he wrote to Kirkpatrick.

“There are obviously, I think, 200 South Australians employees working on the worksite and… there are critical path works,” he told the committee.

“The project cannot proceed further unless certain works are completed.

“We needed those people in the state.”

Braxton-Smith said while the technicians are in South Australia they are required to remain in quarantine when they are not at work, follow a strict testing regime, wear a surgical face mask when they come into contact with the public and monitor for COVID-19 symptoms.

Asked by the committee’s chair and Labor MLC Kyam Maher whether he understood why South Australians stuck interstate might feel “miffed” at the decision to grant the workers travel exemptions, Braxton-Smith said he respected the decision of authorities.

“I appreciate that the current travel restrictions create a number of issues for people both ways, including myself – I can’t travel to Victoria to see my mother who’s particularly sick, but we are all working together to keep ourselves COVID-safe,” he said. 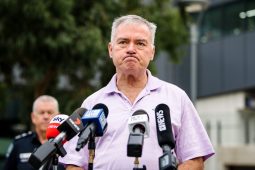 “I appreciate the issues because I experience them firsthand, but I have my respect for the authorities and I am doing my best to ensure that we meet our objectives to keep our workers and our workplaces COVID-safe, keeping essential and important services delivered to the community and ensuring that we continue the vital economic stimulus that is needed.”

The Gawler rail electrification project was initially due to be complete this year, but is now scheduled for completion early next year.

It involves upgrading the Gawler rail line to deliver a faster electrified network through Adelaide from Gawler to Seaford.