The PointData Lay of the Land Spring Edition, released today, shows 73 per cent of properties in metropolitan Adelaide have had an annualised price growth of 10 per cent or more in the six months to August 2021.

The proportion of Adelaide properties experiencing this level of growth is up 61 percentage points from when PointData last gauged the metric in May of 2021.

In fact, the property analytics company only introduced the “+10 per cent” category at the start of this year in a bid to capture a “significant but not overwhelming number of rapidly growing properties, particularly in the city’s east”.

When the category was first included in its Lay of the Land Summer Edition, just seven per cent of Adelaide properties fit the +10 per cent criteria.

“This category has now grown to include 73 per cent of metropolitan Adelaide’s properties,” the report states.

“In spring 2020 only 70 per cent of properties were seeing any growth at all, underlining just how unprecedented this period of growth has been.” 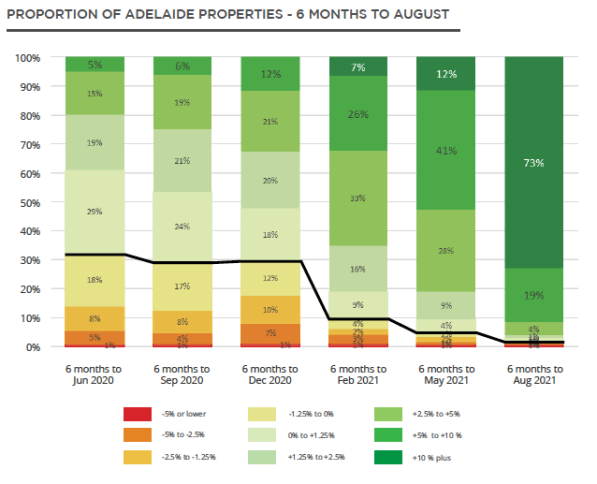 PointData’s breakdown of property price growth in metropolitan Adelaide, with 73 per cent of houses now experiencing annualised growth of more than 10 per cent.

A further 19 per cent of Adelaide’s homes have an annualised growth rate between five and 10 per cent.

“It is no secret that property prices in metropolitan Adelaide have been increasing rapidly since the early stages of the pandemic,” the report continues.

“However … this growth has been greater in speed and magnitude than anyone could’ve predicted.”

Auctions continue to be the key driver of the rapid house price growth, according to PointData, which cited figures from Ray White showing the average number of registered bidders per auction grew to 6.9 in July, compared to 2.6 the year before.

“It is no longer uncommon to have dozens of registered bidders at any given auction,” the report states.

“Sustained low interest rates set by the Reserve Bank is seeing an increase in borrowing power.

“Combined with the short periods for real estate campaigns, the slowing in supply … and the prolonged interstate interest in the Adelaide housing market, property prices are expected to (at a minimum) hold their current inflated values.”

The spring report also identifies the top 10 suburbs by annualised growth over the past three months.

The city’s eastern suburbs and inner-south continue to dominate, with Glen Osmond leading the way at 49.2 per cent, followed by Clarence Gardens (45.3 per cent) and Toorak Gardens (43.7 per cent).

The top ten Adelaide suburbs by three-month annualised price growth, according to PointData

Of the top 10 price growth suburbs, only three – Glandore, Black Forest and Clarence Gardens – have a median sale price under $1 million.

Glandore is the most accessible with a median price of $689,477 but has a three month annualised growth rate of 38.8 per cent, prompting a warning from PointData that these previously inexpensive suburbs are becoming “increasingly unaffordable”. 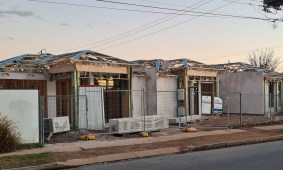 “Although seemingly unlikely, another year of 39 per cent growth for Glandore would see the median sale price jump to over $950,000, with Glen Osmond potentially reaching in excess of $1.7 million,” the report states.

Only Mawson Lakes and Crafers West recorded price decreases in the three months to August this year, with the fall in prices attributed to the absence of international students at UniSA’s Mawson Lakes campus and low sales activity in the “difficult terrain” around Crafers.