Latest data released on Wednesday shows 4.8 per cent – or 1291 – aged care workers in South Australia are yet to receive their first dose of a COVID-19 vaccine, despite the state and federal  governments prioritising them in the first round of the vaccination rollout in February.

Only 77.5 per cent of South Australian aged care workers are currently fully vaccinated, representing 20,819 staff, while 95.2 per cent – or 25,597 workers – have received one dose.

Those who are yet to receive their first dose of a COVID-19 vaccine will from today be prevented from attending their workplace unless they have an approved exemption, after the National Cabinet in June set a September 17 cut-off date for all residential aged care workers.

Exemptions can be granted for aged care workers who are pregnant, or who have a medical certificate confirming they are unable to get vaccinated for health reasons.

The requirement followed advice from the Australian Health Protection Principal Committee in recognition that elderly Australians are at heightened risk becoming severely impacted by the coronavirus.

He said there “may well be further exemptions applications”, with each case considered “on its merits”.

“There is certainly a handful of people who we need to work through to get them vaccinated,” he said.

“We’re very grateful for the work the residential aged care facilities have done with both the Commonwealth and the state to roll-out this program.”

Wade said if an aged care worker is not vaccinated, they should not come to work.

He said 43 employees were yet to provide their vaccination certificate, but of those, 33 indicated that they had at least one dose or planned to do so by today’s deadline.

Spinks said the remainder of staff were “either pregnant, on extended leave, or have not been contactable”.

“We will be very close to 100 per cent of staff having received their first dose vaccination by the deadline, and therefore expect minimal impact in terms of our ongoing workforce planning,” he said.

Resthaven public relations manager Julie Johinke told InDaily on Wednesday that “only a small number of staff” at its South Australian residential aged care homes would not be vaccinated by today’s deadline.

She said some staff had medical exemptions and the organisation was aiming to “reach as close as possible to 100 per cent (vaccination rate) by Friday”.

“We are working within the directions of SA Health and the Commonwealth Government and have built this into our workforce planning,” she said.

“The quality and safety of our residents remains our primary focus.”

The ACT has the highest aged care vaccination rate in the country, with 97.8% of its workforce at least partially vaccinated, while Queensland has the lowest rate, at 94.1 per cent. 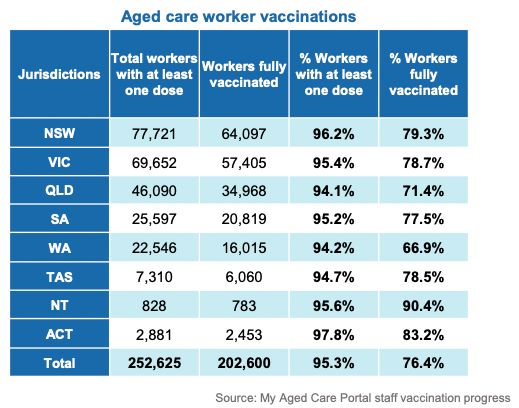 A federal Health Department spokesperson told InDaily that aged care workers in Australia “now have one of the highest workforce vaccination rates in the world”.

The spokesperson said the department was contacting facilities which have a low vaccination rate.

“Where those figures are low, those calls have predominately highlighted that it is due to a slowness of the facilities uploading their latest information,” the spokesperson said.

“Where there are more substantive issues, they are being case managed and additional vaccination teams are being mobilised this week.”

Meanwhile, the State Government today announced it would expand its home quarantine app from October to allow South Australians who are returning from overseas to undertake quarantine at home.

The expansion will allow up to 250 travellers each week to quarantine at home rather than in a medi-hotel.

But at this stage, SA Health says people won’t be able to apply to use the app, with the Government instead intending to choose which travellers are eligible.