A new trilateral security pact between Australia, the United Kingdom, and the United States – to be known as ‘AUKUS’ – was declared in a landmark joint address by president Joe Biden and prime ministers Boris Johnson and Scott Morrison this morning – with a new fleet of SA-built nuclear-powered submarines as its centrepiece.

In a later media conference, Morrison confirmed the drastic shift in domestic defence policy would see the extended Collins Class full cycle docking program remain in SA – after years of uncertainty as to whether the lucrative maintenance regime would be moved to Western Australia.

But the new fleet will be at the expense of the contracted and long-awaited $90 billion fleet of 12 submarines to be built at ASC in Osborne, with the French Government and Naval Group blindsided by the sudden about-face.

In a formal statement, the French Government strongly condemned Australia’s decision to sign the AUKUS pact, saying it was “contrary to the letter and the spirit of cooperation that prevailed between Australia and France”.

“The American choice which pushes aside a European ally and partner like France from a structured partnership with Australia, at a time when we are facing unprecedented challenges in the Indo-Pacific region… marks an absence of consistency that France can only observe and regret,” the statement said.

The French Government-backed Naval also expressed “major disappointment” after its deal to build Australia’s next fleet of 12 submarines unceremoniously scrapped.

The project was originally worth up to $50 billion but had since blown out to almost double that amount, with many more billions to be spent on whole-of-life sustainment.

The company, which already employs around 350 workers in SA and believed it was on the cusp of signing a contract for the next tranche of the project, said in a statement it “takes note of the decision of the Australian authorities to acquire a fleet of nuclear submarines in collaboration with the United States and the United Kingdom”.

“The Commonwealth decided not to proceed with the next phase of the [Naval] program – this is a major disappointment for Naval Group, which was offering Australia a regionally superior conventional submarine with exceptional performances,” it said.

The company noted that it and its partners had for five years “given their best and Naval Group has delivered on all its commitments”.

“The analysis of the consequences of this sovereign Australian decision will be conducted with the Commonwealth of Australia in the coming days,” it said.

The ‘AUKUS’ alliance, a clear bid to counter Chinese aggression in the Asia-Pacific, will see Australia become the only non-nuclear country in the world with a maritime nuclear capability.

China’s Washington embassy reacted angrily to the move, declaring the three nations should “shake off their Cold-War mentality and ideological prejudice”.

Asked to comment, Chinese embassy spokesman Liu Pengyu said countries “should not build exclusionary blocs targeting or harming the interests of third parties… in particular, they should shake off their Cold-War mentality and ideological prejudice.”

In a joint statement this morning, the three western leaders resolved to “deepen diplomatic, security, and defence cooperation in the Indo-Pacific region, including by working with partners, to meet the challenges of the twenty-first century”.

“Through AUKUS, our governments will strengthen the ability of each to support our security and defence interests, building on our longstanding and ongoing bilateral ties,” they said.

“We will promote deeper information and technology sharing… as the first initiative under AUKUS, recognising our common tradition as maritime democracies, we commit to a shared ambition to support Australia in acquiring nuclear-powered submarines for the Royal Australian Navy.”

They flagged “a trilateral effort of 18 months to seek an optimal pathway to deliver this capability”, leveraging “expertise from the United States and the United Kingdom, building on the two countries’ submarine programs to bring an Australian capability into service at the earliest achievable date”.

“We intend to build these submarines in Adelaide, Australia,” Morrison said in an address made by all three leaders this morning, but there is no detail as yet about the size or cost of the fleet – although it’s anticipated the existing ASC facilities would be utilised.

In a later media conference, Morrison confirmed South Australia “will continue to be the home for the Collins Class submarine full-cycle docking” – at the expense of WA.

“I know this is a decision that had been eagerly awaited in SA,” he said.

He said in recent visits to SA he had “made it very clear that we’d determine this matter once high-level strategic issues had been decided”.

“As is clear, these matters are now decided,” he said.

“And it’s strategically important that we maintain the full cycle docking capability there in SA and continue with those operations there.

“SA and particularly Osborne will be a hub for Australia’s shipbuilding ambitions and programs.”

The current fleet will undergo life-of-type extensions beyond 2026. 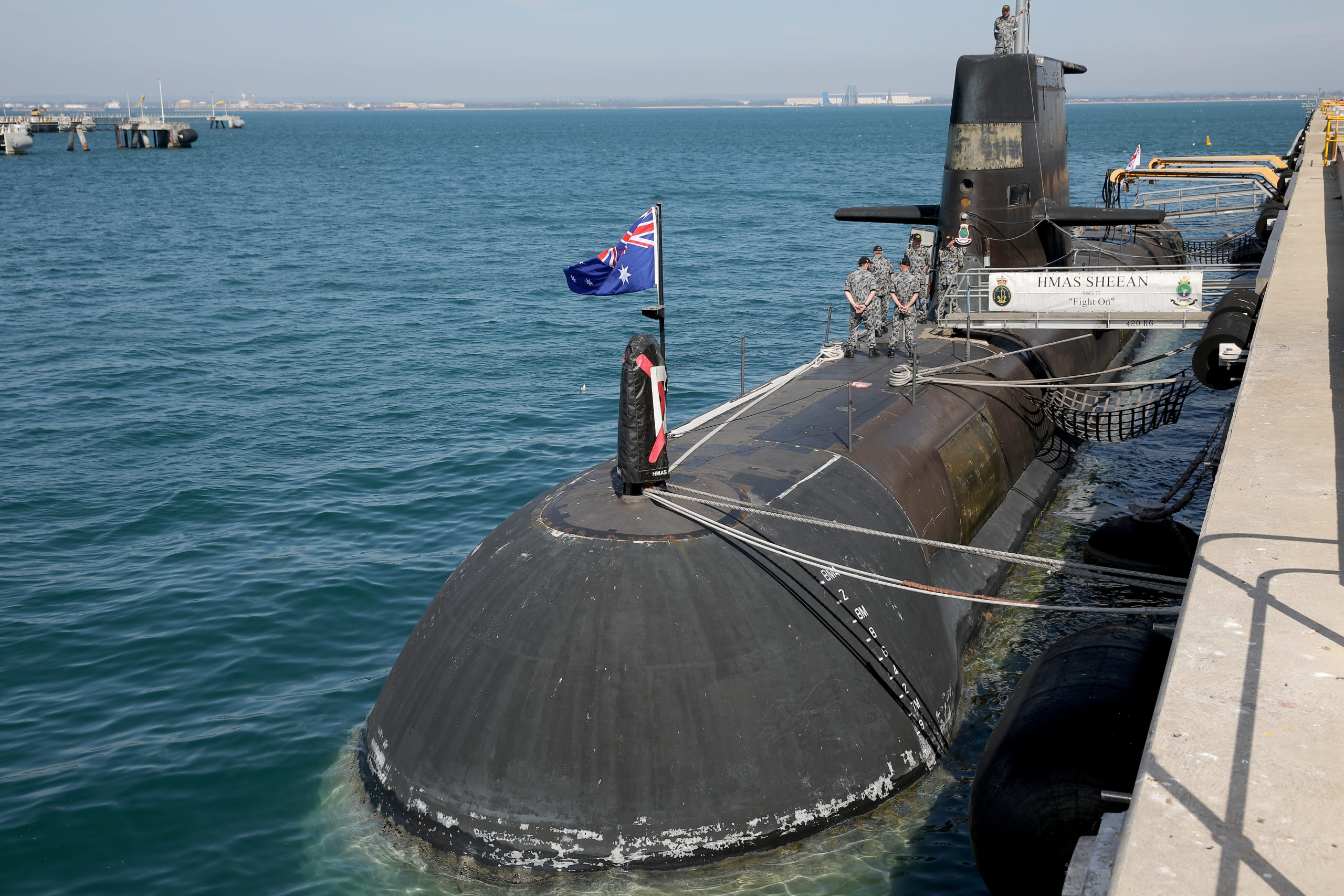 The Federal Government will also invest up to $5.1 billion in upgrades to the Hobart Class destroyer combat management system upgrades at Osborne from 2024, which it says will create another 300 jobs.

“It’s a testament to the great skills we have here [and] cements SA as the maritime capital of the nation,” he tld reporters.

“We are the defence state – and today we are cementing those jobs for today and jobs for tomorrow.”

Marshall said “our thoughts are with people working on [Naval’s] Attack Class submarines” but insisted there would be “so many jobs and opportunities they will be able to transition to other fantastic defence jobs immediately”.

It’s understood negotiations had been ongoing towards signing a contract for the next tranche of the existing Naval Group deal, with the company now scrambling to find out what the dramatic development means for its 350 SA-based workers.

SA Opposition Leader Peter Malinauskas said the move had created “grave uncertainty” about the future of local jobs “and tens of billions of dollars of investment in SA”, following the sudden demise of “the biggest project in South Australia’s history”.

“South Australia now faces the prospect of years of delays on a project which was originally supposed to begin building submarines in the mid-2020s… with works to continue through to the mid-2050s,” he said in a statement.

“This morning’s announcement… contained no detail about what South Australia can expect in terms of jobs and investment to replace the Attack Class project, with US President Joe Biden flagging an 18-month consultation period to determine the way forward,” he said.

“This means we have wasted at least five years, with the prospect of several more years of delays to come.

“The future submarines project was a shining light on the hill for our state – now that has all been thrown into uncertainty.”

State secretary Dale Beasley said in a statement that “thousands of workers’ futures are now up in the air and what they really need from the Prime Minister and Premier Steven Marshall is some understanding of what their futures hold”.

“Workers employed by Naval Group, including close to 100 who have made the life changing move to be seconded to France with their families, have no certainty from either state or federal government,” he said.

However, he added that there was “welcome news for the hundreds of ASC workers who can now rest assured that their Collins Class maintenance jobs will stay in SA”.

But he insisted there was “no certainty that the future nuclear submarines will deliver anything near the levels of local job creation, local industry stimulation and sovereign capability that the Naval Group build would”.

“Australia currently has no capability to maintain nuclear powered subs, and we suspect that that maintenance work will need to be done offshore in the US or UK,” he said.

SA independent senator Rex Patrick, who had long criticised the Naval deal, welcomed the Government “walking away from the Naval Group option”, saying: “It was too expensive and too risky.”

Australia has already spent around $2 billion on the now-abandoned deal, but Patrick said it was “much safer to walk away now than it would have been to continue with the project”.

However, he urged caution on the nuclear-powered option, saying it was “something that needs to be carefully considered”.

“It’s highly ambitious and involves a great level of complexity, not just technical but also political,” he said.

“We don’t have a nuclear industry and we haven’t socialised the idea of having nuclear reactors sitting on a dock in Osborne.”

He welcomed the confirmation of full cycle docking in SA, saying it was “something I’ve been fighting for since I entered the parliament”.

“There was no sensible case to shift it to WA, and I’m disappointed the Government took so long in coming to this decision,” he said.

“It was an obvious decision, and it’s created uncertainty for our workforce and the [allied] 700 businesses.”

Morrison lauded the AUKUS arrangement as a “forever partnership”, saying it was necessary “to keep Australians safe” in a “new era”.

“The relatively benign period of stability we have enjoyed in our region is behind us,” he told reporters.

He declared the partnership “the single greatest initiative to achieve these goals since the ANZUS Alliance”.

He said the nuclear-powered subs would be faster and have “greater endurance, greater power” than the conventional option, adding this was “the first time this technology has ever been made available to Australia”.

“Australia was not in a position back in 2016 [when the Naval deal was announced] to build and operate a nuclear-powered submarine,” he said.

He said “contractual gates” had been “built into the Attack Class project… and so as we were looking toward the next gate we have decided to not proceed through it”.

But he insisted “this is not about acquiring nuclear weapons… that is not on our agenda”.

Greens SA Senator Sarah Hanson-Young slammed the deal as “disastrous and dangerous”, saying: “Many Australians have woken up to this news this morning and are feeling scared and worried about what the consequences will be.”

“This is a serious escalation in our military policy and spending,” she said.

“It puts a target on the back of Adelaide and SA.”

“We welcome the increased engagement of the UK and US in the region and reiterate our collective objective needs to be the delivery of peace and stability and the preservation of the international rules-based system,” she said.

But she made it clear the submarines would not be welcome in New Zealand’s waters, in line with a long-held policy.

New Zealand has been staunchly nuclear-free for decades, earning the ire of the United States by declining visits from nuclear-powered ships.

“New Zealand is first and foremost a nation of the Pacific and we view foreign policy developments through the lens of what is in the best interest of the region,” she said.

“New Zealand’s position in relation to the prohibition of nuclear-powered vessels in our waters remains unchanged.”