Cregan stunned parliamentary colleagues in July when he announced his intention to retire from state parliament after just four years and return to practising law, but InDaily reported last month he was open to reconsidering the decision after lobbying from senior party figures.

Cregan, who with fellow Centre-Right MP Steve Murray met with Marshall yesterday amid concerns Mackillop MP Nick McBride could quit the party and run as an independent, told InDaily today he had changed his mind and “decided to seek re-election”.

It’s understood that having previously been preselected for his Hills seat of Kavel, he does not need to seek further party endorsement to continue.

InDaily understands that he has been given no guarantees about a frontbench or other roles, but that he had sought funding commitments for his electorate from the Premier.

“After careful consideration and the encouragement of many people in my community, I have decided to seek re-election,” Cregan told InDaily.

“I am passionate about this job and excited about the challenges ahead.”

He said he would be “writing personally to everybody in my seat asking for their support at the election, recognising that I work for them and only my community can extend my contract”.

Cregan and Murray, who yesterday declined to comment when asked whether he was personally considering leaving the Liberal fold, last year distanced themselves from the party’s Right faction, emerging as a Centre-Right breakaway group – which helped cruel the conservative charge at this month’s Liberal AGM.

Cregan’s change of heart will similarly prevent the Right faction from garnering a further foothold in state parliament, with the conservatives having been expected to back Mayo branch president Rowan Mumford for preselection to replace him in Kavel.

Murray told InDaily he was “very, very happy [Cregan] has decided to continue”.

“It’s genuinely great to have Dan back, seeking to extend his contract with the Kavel community, and serving them and the parliament as well as he does,” he said. 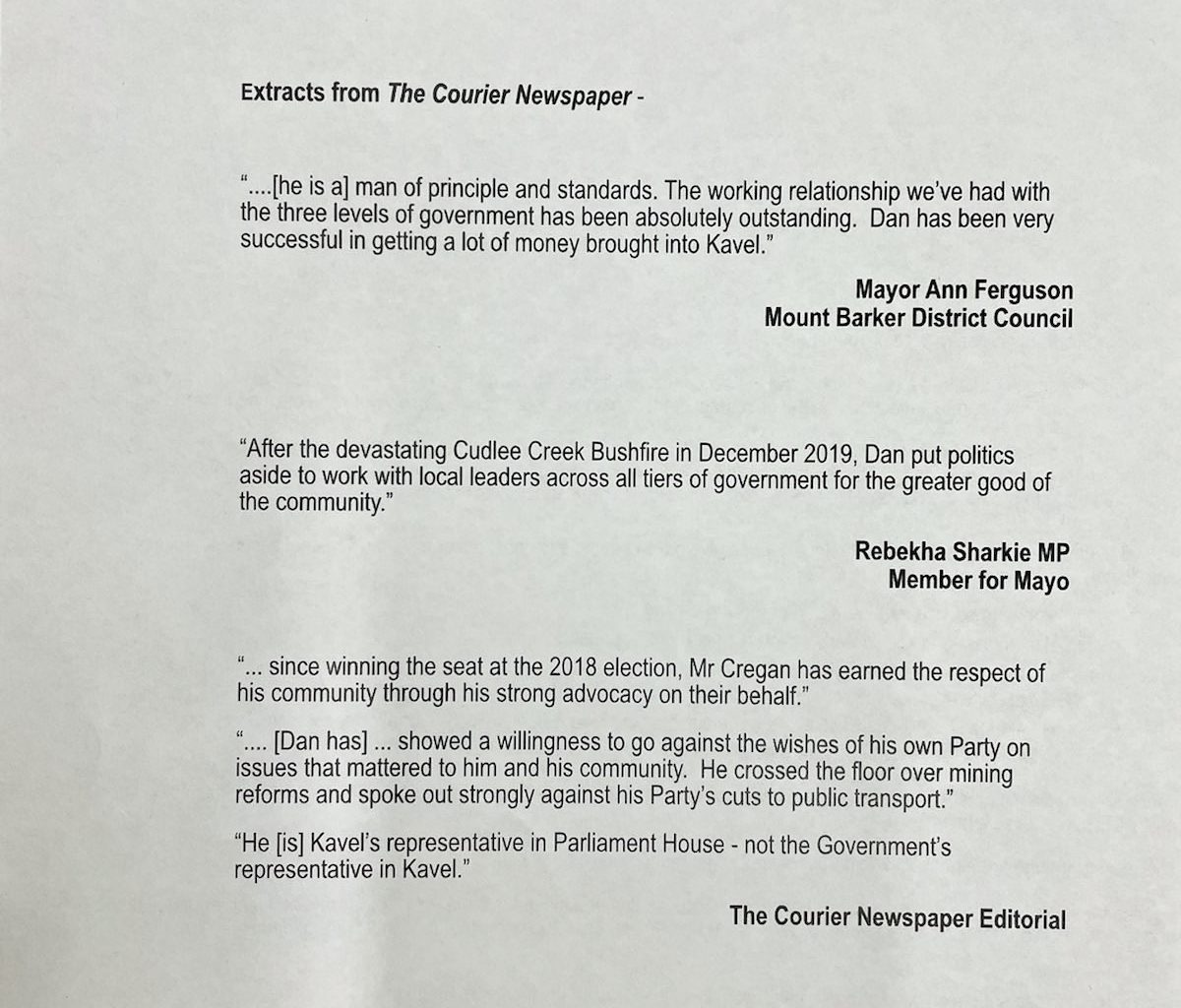 A brochure being distributed in Kavel carries endorsements for Cregan from the Mount Barker mayor, crossbench federal MP Rebekha Sharkie and the local newspaper.

It comes as the pair are believed to have lobbied Marshall about McBride’s prospective split from the party – a move that could see his south-east electorate won by an independent for the first time since his predecessor Mitch Williams was first elected in 1997.

Williams later rejoined the Liberal Party before serving as its deputy leader.

Marshall told reporters today that McBride, who has declined to comment publicly, was “doing some consultation at the moment” about his future in the party.

“They elected a Liberal and I think they expect that to continue.”

Marshall, whom sources have claimed inflamed tensions at a party-room meeting last week by suggesting McBride shouldn’t have crossed the floor on a recent Bill to extend the state’s COVID-19 emergency powers, declined to comment on what was said but confirmed: “I speak to [McBride] on a very regular basis.”

“I’m not going into private conversations,” he said.

McBride has long expressed concerns about the impact of border closures on regional communities and delays in processing exemptions for returning South Australians.

Marshall said today: “I think there’s some general frustration with many MPs – Labor as well as Liberal – about the exemptions process.”

“We know this is very punishing on individuals and families… but my primary concern has always got to be keeping South Australians safe,” he said.

“My focus is on getting SA through this pandemic and creating as many jobs as we possibly can.” 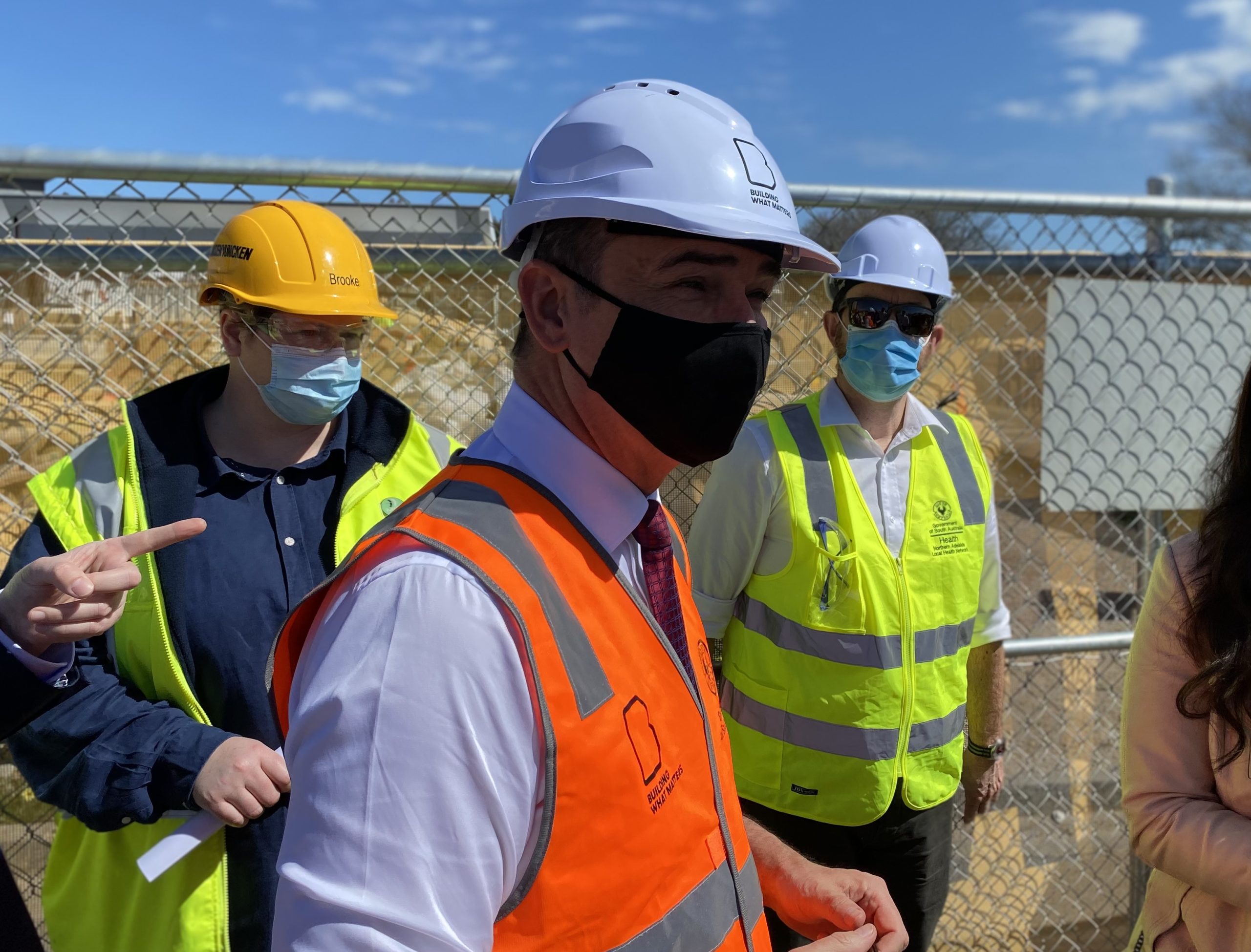 When McBride, Cregan and Murray joined with now-former-Liberal Fraser Ellis to cross the floor against the Government’s Mining Bill in 2018, Marshall declared he had ‘taken his eye off the ball’ by allowing party divisions to spill into parliament.

However, he disputed he had done so again, saying: “I think it’s a different situation this time.”

“There were some late amendments that were moved [on the emergency powers Bill] so it didn’t go through the normal party-room process, so quite a different situation” he said.

But asked whether McBride’s potential split could have been avoided if he had handled his concerns differently, Marshall said: “I don’t know what you’re referring to.”

Asked whether he was concerned about the return of factional divisions that marred the party in decades past, Marshall said emphatically: “No.”

“I’m focussed on getting SA with the team right across the team through coronavirus and creating as many jobs as possible,” he said.

Asked whether he was concerned about the prospect of another Liberal MP moving to the crossbench, which already contains Ellis, Sam Duluk and Mount Gambier MP Troy Bell, Marshall said: “I’ve told you what my focus is at the moment.”