Publicly-listed Renascor Resources is looking to develop its Siviour mine near Arno Bay on Eyre Peninsula, which is the second-largest reported proven reserve of the resource in the world and the largest reserve outside of Africa.

The $210 million project also includes two processing facilities in South Australia – one at the mine site to create a 95 per cent graphite product while a second, more technical site would create a purified spherical graphite product to a purity of at least 99.95 per cent.

A final investment decision on the project is expected next year and if it goes ahead would create about 100 construction jobs and up to 200 ongoing positions.

“The Australian Government is pleased to support the Siviour project, which will bring new jobs and other economic benefits to South Australian communities while also boosting Australia’s position as a leading global critical minerals industry,” he said.

“The project has the potential to generate around $260 million a year in export revenue, and will also help increase Australia’s international competitiveness and help position us a future leader in this sector.”

The August 25 announcement of the POSCO deal takes Renascor’s offtake MOUs to up to 60,000tpa, following smaller non-binding agreements with two Chinese battery anode companies and a Japanese trading company in the past 12 months. 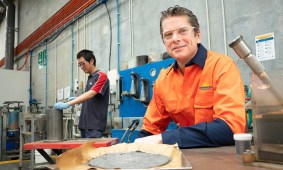 “The project is another step on the path to gaining a slice of the $400 billion world critical minerals market,” Pitt said.

“Whether it is mobile phones and laptops, medical equipment or electric cars, rare earth minerals are the essential components of so much manufacturing today and into the future.”

Renascor managing director David Christensen this month told InDaily this month that the ability to mine the graphite, process it and purify it to at least 99.95 per cent purity before exporting to buyers in China, Japan and Korea gave the Siviour project a competitive advantage.

“I think we have a great opportunity to give South Australia something that is pretty special in terms of not only a mining operation but a downstream operation with a higher value-added product in a growing industry and this project has the potential to be one of the largest if not the largest producers of the product in the world,” he said.

“It should be a really good example of how you can leverage a good asset in Australia to gain even further value and create newer jobs outside of just mining jobs.”