The complainant was told responsibility for the workplace health and safety of parliamentary staff involved a “significant sharing of responsibilities”, with “obligations not being reposed in one person or entity”.

It comes as exiled Liberal Duluk today dramatically confirmed he would run as an independent at next year’s state election.

Parliamentary processes for handling serious workplace harassment have been again thrust into the spotlight, amid new claims about the events at a Liberal Party function in which at least one woman was allegedly subjected to lewd or abusive behaviour from multiple MPs and a member of staff – with subsequent complaints all-but ignored.

The claims centre around several new allegations – many of them second or third hand – made under parliamentary privilege late yesterday by Greens MLC Tammy Franks against embattled Liberal exile Duluk.

The Waite MP, who has suspended his party membership since he was charged, was last month acquitted of basic assault against SA Best MLC Connie Bonaros, an allegation stemming from an incident in which he touched her bottom at a parliament house corridor Christmas party in December 2019.

The event – and numerous claims about his behaviour – prompted former Speaker Vincent Tarzia to establish an independent investigation into what occurred, but current Speaker Josh Teague this week ruled that the stalled inquiry would not recommence.

That decision prompted Franks to break her silence in an extraordinary speech, in which she told parliament of several previously-undisclosed allegations concerning Duluk’s behaviour on the night – much of it centred around a concurrent Liberal Party Christmas function held elsewhere in parliament house.

“That bad behaviour also happened at the Liberal Christmas party event,” she said under privilege in the Legislative Council.

“That these have not yet surfaced in the media, and that attempts have been made to urge party processes to address what I would describe as unlawful and unacceptable behaviour is, indeed, deeply distressing.”

Franks said she had “heard various accounts of just what went on at the Liberal Party party that night”.

“I believe that there is a video of the Member for Waite calling a female staff member a ‘frigid bitch’,” she said.

“I believe that a staffer who was accompanying, and with, the Member for Waite at the time urinated in a corner of an MP’s office before turning around with his penis still exposed, waving his appendage into the breeze with his arms in the air, calling out: ‘Touch it, touch it.’”

InDaily has received correspondence purporting to be from the office of the then-Speaker to a staff member regarding a complaint about Duluk’s behaviour, understood to relate to the night of the Christmas function.

“No doubt you would be aware of employee assistance support that is provided by your employer for employee counselling services,” the letter states.

“Should you feel that you would benefit by receiving this service, I would encourage you to contact your employer to obtain the contact details or your employee assistance program provider.”

The letter states that “for staff of Members of Parliament, like yourself who work in the parliament, there is a significant sharing of responsibilities for work, health and safety, with obligations not being reposed in one person or entity”.

The complainant appears to have requested not to cross paths with Duluk during the course of their work, with the correspondence telling them that “in respect to your office at Parliament House, responsibility for its control rests with the President and/or Clerk of the Legislative Council and to some extent the Member of Parliament who you work for”.

“Should you consider that relocating your office or work space at parliament would ameliorate your work, health and safety concerns, I would redirect you to the President and/or Clerk of the Legislative Council to consider options in consultation with the Member of Parliament”.

However, the staff member was told that “Mr Duluk has a right to attend parliament and to conduct his parliamentary business”.

“As such neither the President or myself have the authority to direct Mr Duluk to modify his behaviour to the extent that it may impinge on Mr Duluk’s ability to move around the parliament and inhibit him from engaging in his parliamentary activities,” the letter states.

It goes on to point out that the Treasurer’s Department is directly responsible for the employment of political staff, but notes it has “limited” capacity to provide a safe work environment “as it does not have control over offices in Parliament House”.

“As staff of a Member of Parliament, you are employed by the Treasurer and your employment is the responsibility of the Department of Treasury and Finance,” the letter states.

“This means the Department also shares the responsibility to provide a safe work environment, albeit limited in what it can do as it does not have control over offices in Parliament House.”

It suggests the complainant “may wish to speak with your employer in conjunction with the Member of Parliament you work for to discuss options in how your work practices could be modified to address the difficulties you are experiencing as a result of Mr Duluk’s [alleged] behaviour”.

It refers to earlier correspondence on the matter, dated February 6 last year, “where I indicated that I would consider inviting relevant persons to participate in a conciliation or mediation process” – but again asserts that the Speaker has limited power to facilitate this.

“While I am still amenable to pursuing that course of action at the completion of my legal process [the now-shuttered investigation], I must reiterate that I have no formal power to require anyone to engage in mediation or conciliation,” the letter says.

“I also do not have any formal power to resolve any dispute between yourself and Mr Duluk.”

Duluk told InDaily today he was not aware of any further complaint about his behaviour at either Parliament House function on December 13, 2019, and the Speaker’s office had never raised the matter with him.

“No-one’s ever put anything to me,” he said.

Asked if he would be surprised at such a complaint being made, he said “yes”.

Duluk had previously railed against Franks’ “outrageous claims… in a speech made under parliamentary privilege”.

“The statements made by Ms Franks, a long-term political adversary, are salacious and designed to cause maximum political damage,” he said last night.

Duluk reiterated that he had been “accused of assault and found not guilty in a Court of Law because Ms Bonaros’ detailed account of that alleged assault could not be considered credible and reliable given that the sole eye-witness she suggested had observed it, and would corroborate it, directly contradicted each and every element of it”.

“I am disappointed that after the conclusion of the legal proceedings and my acquittal as well as the Speaker’s decision to not proceed with a Parliamentary Inquiry, my political opponents seek to exploit this matter,” he said.

InDaily asked Tarzia a series of questions relating to the advice given to the complainant.

He responded: “Your questions would be better directed to the office of the current Speaker.” 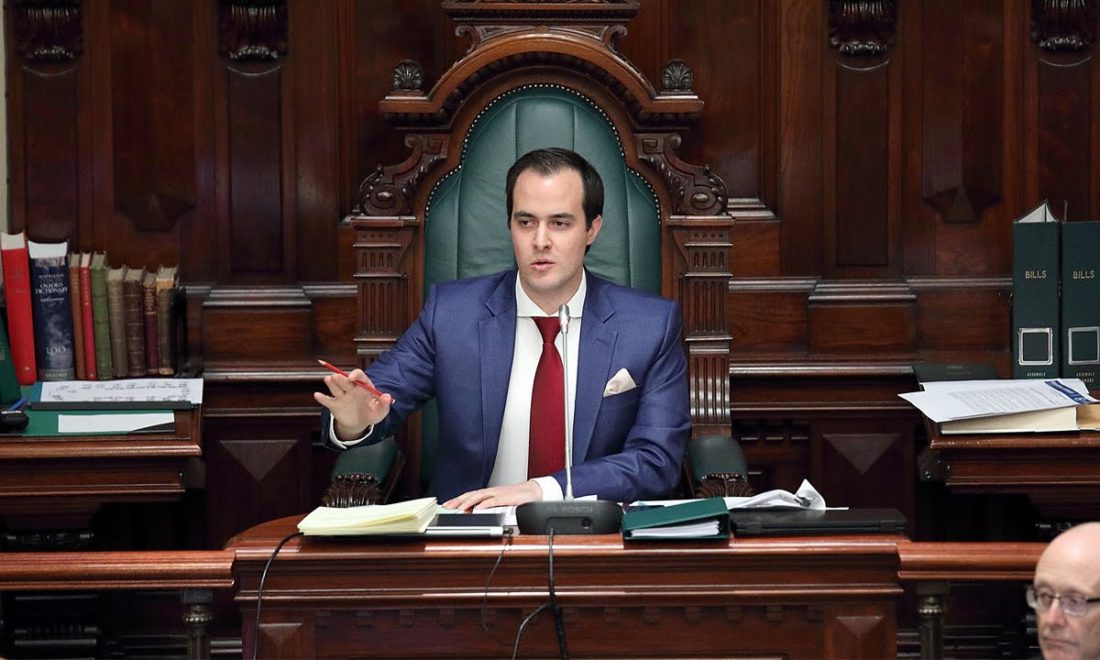 Teague, who was elected Speaker in September 2020, has been contacted for comment.

The correspondence was sent months before an Equal Opportunity Commission inquiry into harassment in the SA parliamentary workplace was established – after first being opposed by the Government for being too expensive.

Under privilege yesterday, Franks also alleged that a separate case study detailed in that Commission’s report referred directly to the Liberal Party Christmas function, saying: “That complaint originated from this evening.”

The case study, which also emphasised a lack of clear process for dealing with complaints, detailed “multiple alleged matters involving sexual harassment and assault” with “the alleged incidents occurring at a work social function”.

“One matter involved alleged (low level) sexual harassment by two Members of Parliament that then escalated to alleged sexual assault by one Member of Parliament,” the Commissioner’s report read.

“Separately, another incident of alleged sexual harassment occurred that was conducted by a staff member towards the victim (and others).

“The alleged incidents were reported by the victim to several sources. This included immediately or soon after the incident.

“The Review was told that the victim reported the matter to colleagues, then over the following weeks and months to senior leadership of the political party, the relevant Presiding Officer, and two leadership positions in the public service.

“The Review was told that the response to the victim from colleagues was ‘you’ll be a rat if you say anything’ and ‘you don’t report MPs’, interpreted by the victim to mean ‘put up with it and don’t stir up trouble’.

“The response from the party was to present the option of reporting to police and offer strategies to avoid contact with the harasser.

“The victim felt the party otherwise sought to manage it within a closed circle with minimal information shared with the victim. This was perceived by the victim as a focus on managing the matter to prevent fall-out or minimise disruption to the party and political process.”

Duluk to run as an independent

The report stated the victim “considered all these responses as inappropriate and absent of any process”.

“In raising the incidents, the victim wanted an internal investigation process that acknowledged what had occurred and the impacts on her, management/ investigation with a level of independence, protection of her integrity, career and privacy and that appropriate consequences be applied to the harassers,” the report found.

“The victim reported to the Review that none of these outcomes were achieved.”

Franks noted that “with the ending of the Speaker’s Inquiry, this matter and those victims now have nowhere to go”.

“The parliamentary processes have failed them,” she said.

“The party processes are all they have left but, to my mind so far, they have also failed.”