Federal Government data shows South Australia’s Aboriginal vaccination rate is tracking well behind that of the broader population, with First Nations South Australians least likely to be vaccinated in the outback and across Adelaide’s northern suburbs.

The data, accurate as of August 30, shows just 15.62 per cent of Aboriginal people aged over 15 who live in South Australia’s outback are fully vaccinated, despite data from August 22 showing 27 per cent of the total outback population was double-dosed.

Central Adelaide and the Hills recorded the highest Aboriginal vaccination rate, with 28.53 per cent of First Nations people aged over 15 in that region double-dosed, compared to 34.9 per cent of the region’s total population.

The data was released by the Federal Health Department last week following a motion by senator Pat Dodson calling on the Government to release vaccination rates for Aboriginal people by geographic area.

The figures reveal Western Australia has the lowest Aboriginal vaccination rate, with some regions in that state recording an uptake of less than 10 per cent.

Across Australia, Aboriginal people were prioritised as one of the first groups to get vaccinated, due to a higher prevalence of chronic disease in some communities.

But InDaily has previously reported concerns from the Aboriginal Health Council of South Australia that a lack of Pfizer supplies in some communities was hampering the rollout.

A SA Health spokesperson told InDaily that the Government had been working closely with local health networks and Aboriginal community-controlled health organisations to rollout COVID-19 vaccines to Aboriginal people.

The spokesperson said increased supplies of the Pfizer vaccine and a Commonwealth Government move to engage the Royal Flying Doctor Service to deliver the vaccines to communities in South Australia’s outback would ensure more vaccinations would be administered in the coming month.

“Our work with NGOs, Aboriginal Health Clinics and community leaders to provide community education and information has helped to enable significant support of the vaccination program within communities,” the spokesperson said.

“We have also launched an Aboriginal specific vaccination campaign, featuring well-known Aboriginal community leaders and members rolling up their sleeves.”

It comes amid concerns that conspiracies and misinformation were spreading fears about vaccines across Aboriginal communities.

“We have had some communities that have told us that COVID does not exist and, needless to say, our vaccination rates there are incredibly low,” he said.

“What we have worked on is sending staff, Aboriginal staff, into those communities for a couple of weeks before we intend to start vaccinating again and talking to people and building the awareness, building the support for it.” 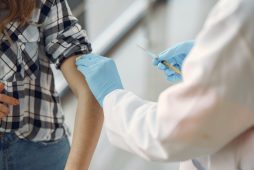 “We need to be aiming towards 100 per cent vaccination rates among Aboriginal and Torres Strait Islander communities,” she said earlier this week.

“It’s going to be very challenging in the face of this dangerous misinformation.”

Latest data, released yesterday, shows 56.7 per cent of South Australians have received at least one dose of a COVID-19 vaccine, while 38.3 per cent are double-dosed.