InDaily has obtained a full version of a letter to Wingard from the chairs of Country Racing SA and the South Australian Jockey Club, which says the Minister’s “appointment” of Brett Dixon to the board of Thoroughbred Racing SA “contravenes the TRSA Constitution”.

Dixon was chair of the Darwin Turf Club at the time of his appointment in 2019 – which appeared to be in direct contradiction of the TRSA’s constitution which precludes the appointment of committee members or management of other racing clubs.

The letter told Wingard that Dixon could only take up the appointment if he resigned from the Darwin Turf Club or if the constitution was amended – neither of which happened at the time.

Dixon this year has attracted new controversy, and lost his position with the Darwin Turf Club, after the Northern Territory’s anti-corruption body released a highly critical report into his involvement in a construction project at the club’s Fannie Bay racecourse.

In 2019, Wingard refused to answer InDaily’s questions about the constitutionality of Dixon’s appointment, referring queries to the TRSA board.

However, it is now clear that the Minister was asked to intervene in a letter dated October 31, 2019.

Last month, Wingard’s office refused to release the full contents of the letter after a Freedom of Information request from InDaily.

Wingard’s FOI officer heavily redacted the contents of the letter – down to the names of the then chairpersons – citing a clause in the FOI Act which precludes the “unreasonable disclosure of information concerning the personal affairs of any person (living or dead)”.

The letter Wingard’s FOI officer released to InDaily in August only revealed that the two bodies – who are the shareholders of TRSA, now known as Racing SA – wrote to Wingard about Dixon’s appointment. 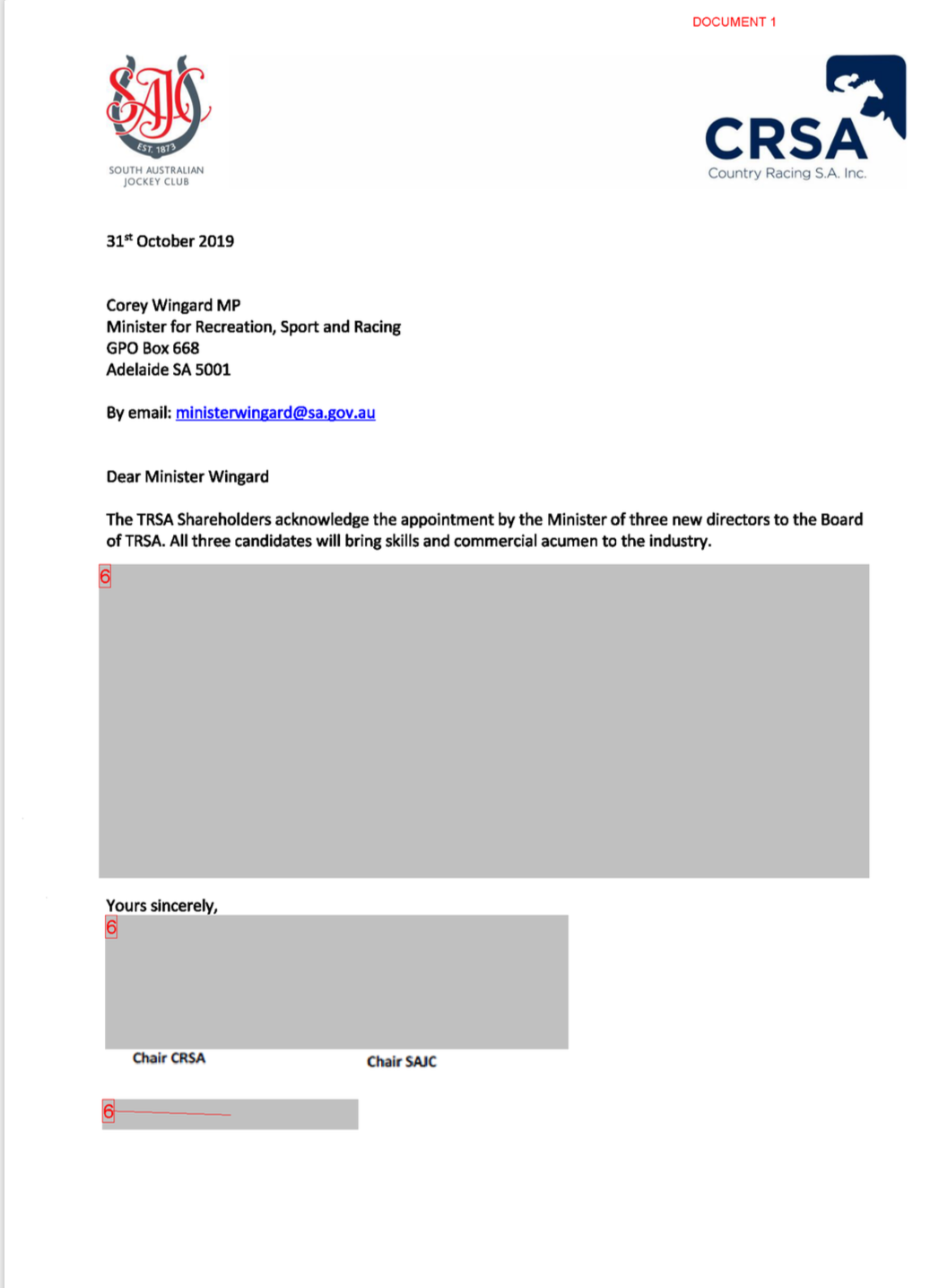 However, InDaily has now obtained an uncensored version of the correspondence which makes it clear that Wingard’s endorsement of Dixon was opposed by the two shareholders of the TRSA.

The letter, signed by Country Racing SA chair Wayne Henson and then SAJC chair Bodelle Francies, says that three new appointments to the board – Dixon, media identify Cos Cardone, and financial services figure Rob Rorrison – would all bring “skills and commercial acumen to the industry”.

“However, the shareholders cannot endorse the appointment of Brett Dixon because his appointment contravenes the TRSA Constitution,” the letter says.

“It is our view that The TRSA Board and its executive are the custodians of the constitution and must uphold the Constitution on behalf of the shareholders.”

The letter says that the two bodies informed the then chair of Thoroughbred Racing SA, Frances Nelson, “both verbally at the Annual General meeting last week and in writing this week” of their view.

It says that while Dixon “is an outstanding candidate”, he could only be allowed to take up the board position if he resigned his place on the Darwin Turf Club board or the constitution was amended.

Neither of those events happened, with the constitution amended a year after Dixon was appointed – and then it is not clear whether the new measures were applied to Dixon.

The letter finishes with an invitation to the Minister to work with the two bodies “on finding a solution to this issue”, saying they “are available to discuss anytime”.

Nelson retired as chair of the TRSA last year, to be replaced by Rorrison.

Also last year, Dixon was elevated to deputy chair of the body, which has since been renamed Racing SA.

He took a brief leave of absence after the adverse ICAC findings, but has since returned to the role. He denies any wrongdoing.

Dixon’s name was on a list of potential appointees to the board, sent to Wingard by a selection panel which is dominated by members nominated by the Minister and chaired by former Liberal minister Amanda Vanstone.

Wingard then endorsed the appointment. Vanstone told InDaily at the time that any “concerns” about recommended appointees were flagged with the minister.

That process of appointing directors was imposed by Wingard as a condition of a $24 million “stimulus package” for the racing industry.

He strongly insists he endorses rather than appoints board members, but the letter from the SAJC and Country Racing SA indicates that they believed, at least in 2019, that Wingard was the appointing authority – saying that the “TRSA Shareholders acknowledge the appointment by the Minister of three new directors”.

The Territory anti-corruption body handed down a damning report in late June about an NT Government grant of more than $12 million that was used to build a new grandstand for the Darwin Turf Club. The contract to build the grandstand went to one of Dixon’s companies.

The ICAC’s report on the matter found Dixon and four others had engaged in improper conduct and Dixon’s actions “may be referred to the Director of Public Prosecutions for the consideration of criminal charges”.

Dixon has strongly rejected the ICAC report, and says he is taking legal action to clear his name.

Last month he failed in a bid to be re-elected to the turf club board.

In a statement this morning, Racing SA said appointments were up to the Minister.

“As has been made clear before, Racing SA is not involved in the director appointment process,” it said.

“The Director Selection Panel makes a recommendation to the Minister who has the final power of endorsement.

“As a formally appointed and endorsed Board, all decisions made by directors are valid.”

“Mr Dixon was recommended and considered a good appointment for the role by the selection panel that included SAJC and CRSA representatives,” the statement said.

“Minister Wingard endorsed that recommendation and it was then a matter for the TRSA and their members to ratify, which they did.”