A new statewide poll conducted by online market research company Dynata on behalf of progressive think-tank The Australia Institute has the Liberals retaining a 51 per cent two-party vote to Labor’s 49 per cent.

It mirrors the last statewide poll taken in SA, a Sunday Mail-YouGov poll published in March.

The polling was conducted in July – the same month in which SA was plunged into a seven-day lockdown after the Modbury COVID cluster was detected. 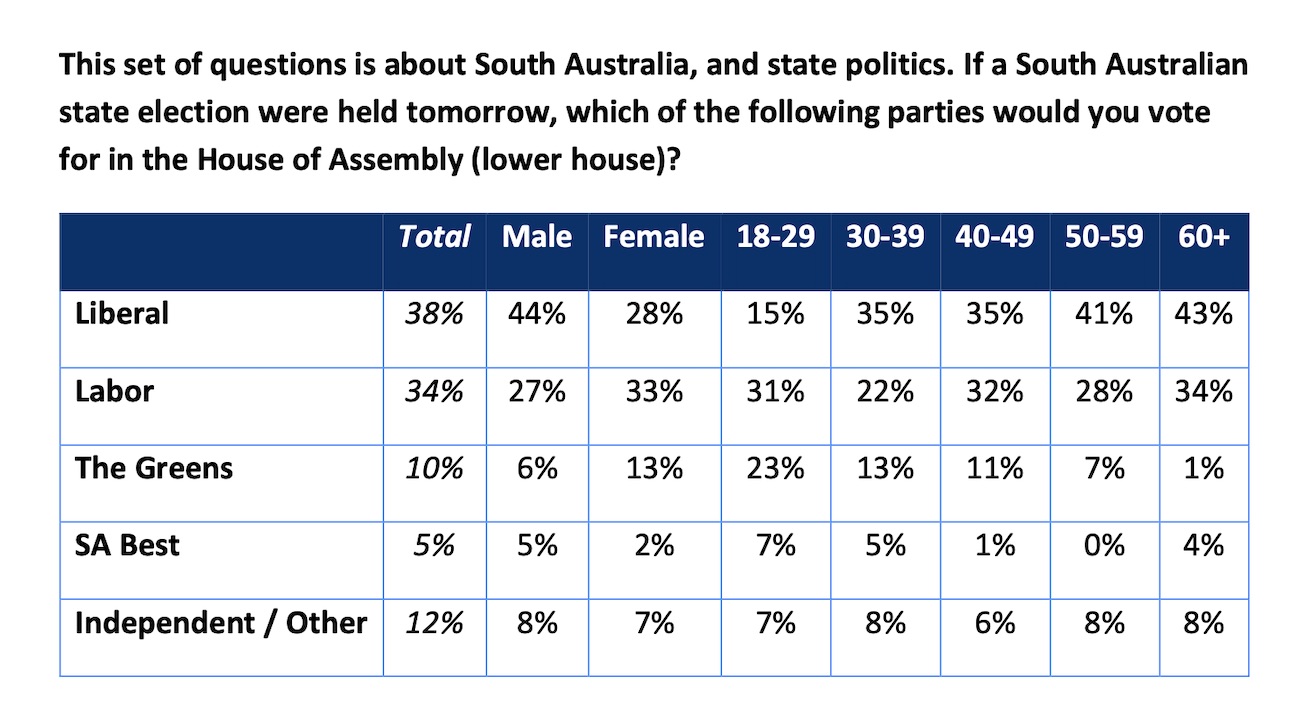 A breakdown of voting intentions from the survey.

The online survey of 599 South Australians took place between July 15 and 29, with the results “post-weighted to reflect social demographics by age and gender”.

“Those who were undecided were asked which way they were leaning [with] these leanings included in voting intention,” the survey says.

The polling found the Liberals on a primary vote of 38 per cent to Labor’s 34, with the Greens on 10 per cent and SA Best retaining 5 per cent support despite the absence of founder Nick Xenophon and no current lower house members.

However, there remained a high proportion of voters citing an intention to support a crossbench candidate, which could include Pauline Hanson’s One Nation – which garnered six per cent support in the Upper House – former senator Bob Day’s Australian Family Party or the revamped Family First, which is being resurrected by former Labor frontbenchers Jack Snelling and Tom Kenyon. 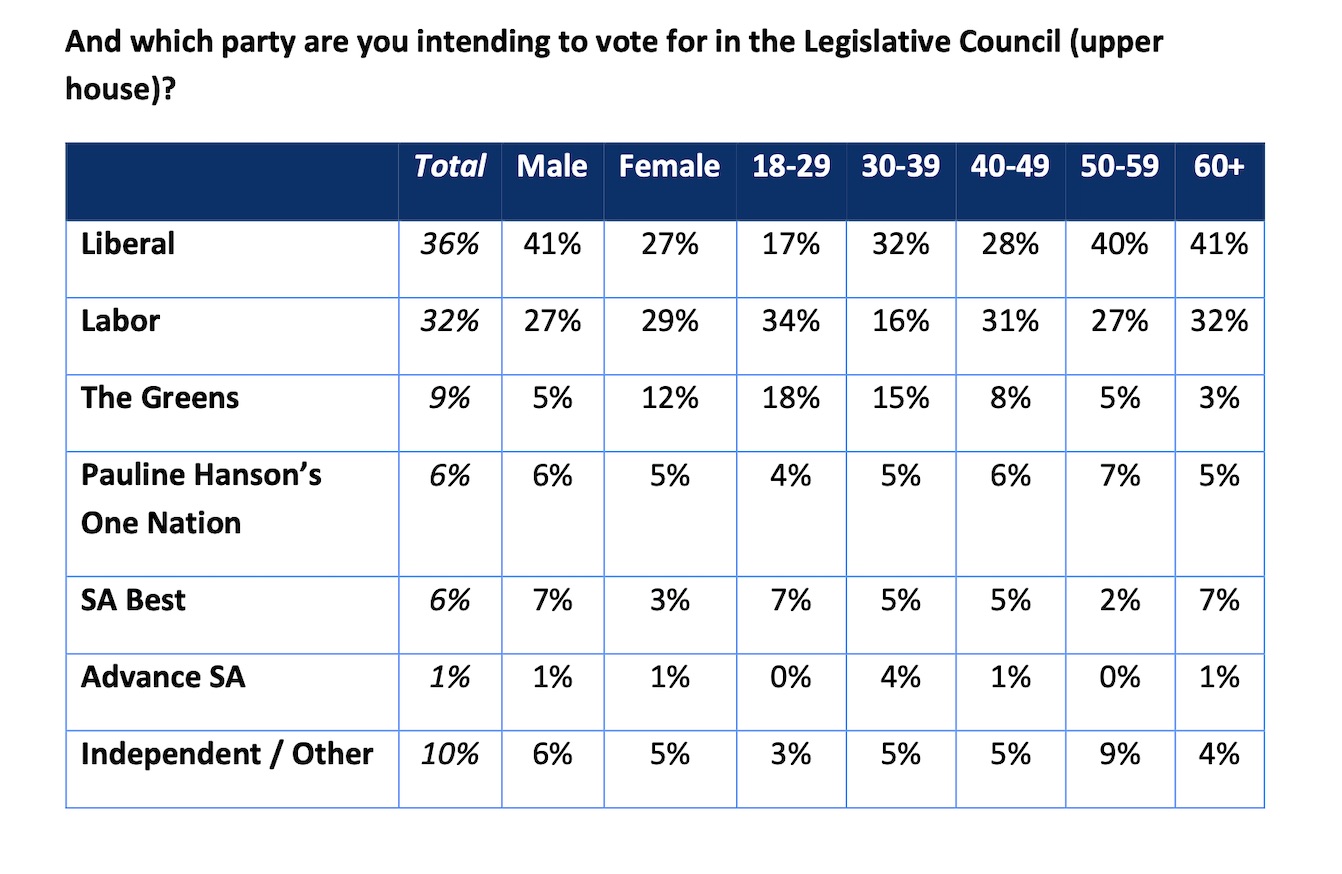 Voting intentions for the Upper House.

The two-party preference flows were calculated based on the preference flow at the 2018 State Election – a complicating factor given SA Best’s uniquely strong showing at the time.

The poll also gauged respondents’ most important political issues ahead of polling day, with health, the economy and climate change the three most commonly cited.

One in four respondents rated the economy as the key issue, while 12 per cent nominated climate change as their major vote-changer. 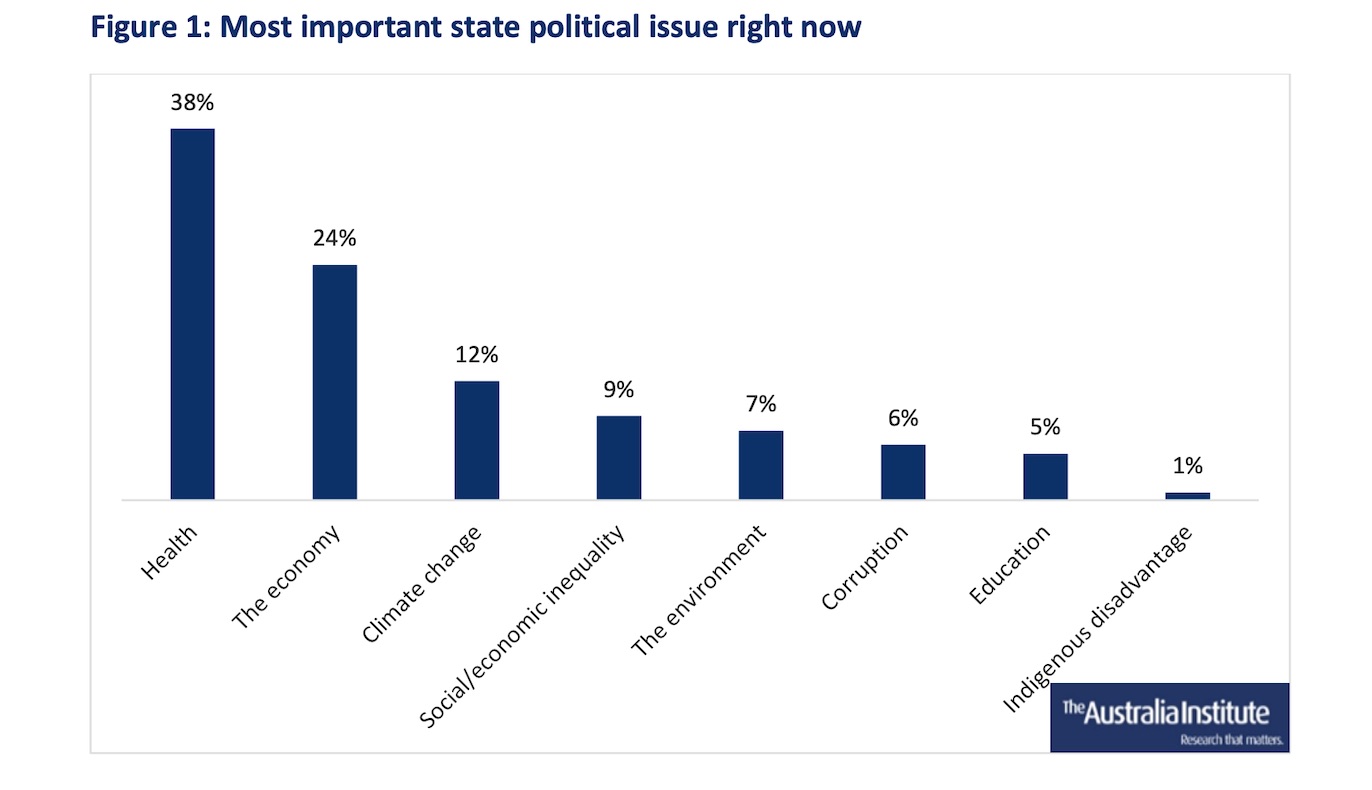 The survey found voters were “just as likely” to trust the Liberal Party as Labor to manage the state’s health system, with each major party garnering 36 per cent.

However, an overwhelming majority – more than eight in 10 voters – said they’d prefer to see public money spent on the health system than the Liberal Government’s promised sports and convention centre complex on the Riverbank.

More than seven in 10 voters for every political party prefer health spending to the Adelaide Arena proposal, which was most popular with Greens voters, of whom 18% said they’d like to see the project built.

More voters polled trusted the Liberal Party than Labor to manage the state’s economy, while there was an even split across demographics about the Government’s performance managing the health system.

The Australia Institute’s SA Director Noah Schultz-Byard said the polling suggested “voters can expect a strong campaign with a focus on health, the economy and climate change over the next six months”.

“In the midst of the COVID-19 pandemic, health is shaping up as the key political battleground in South Australia,” he said.

“The economy and climate change are also sitting top of mind for a significant number of SA voters.

“All signs point to a close election.” 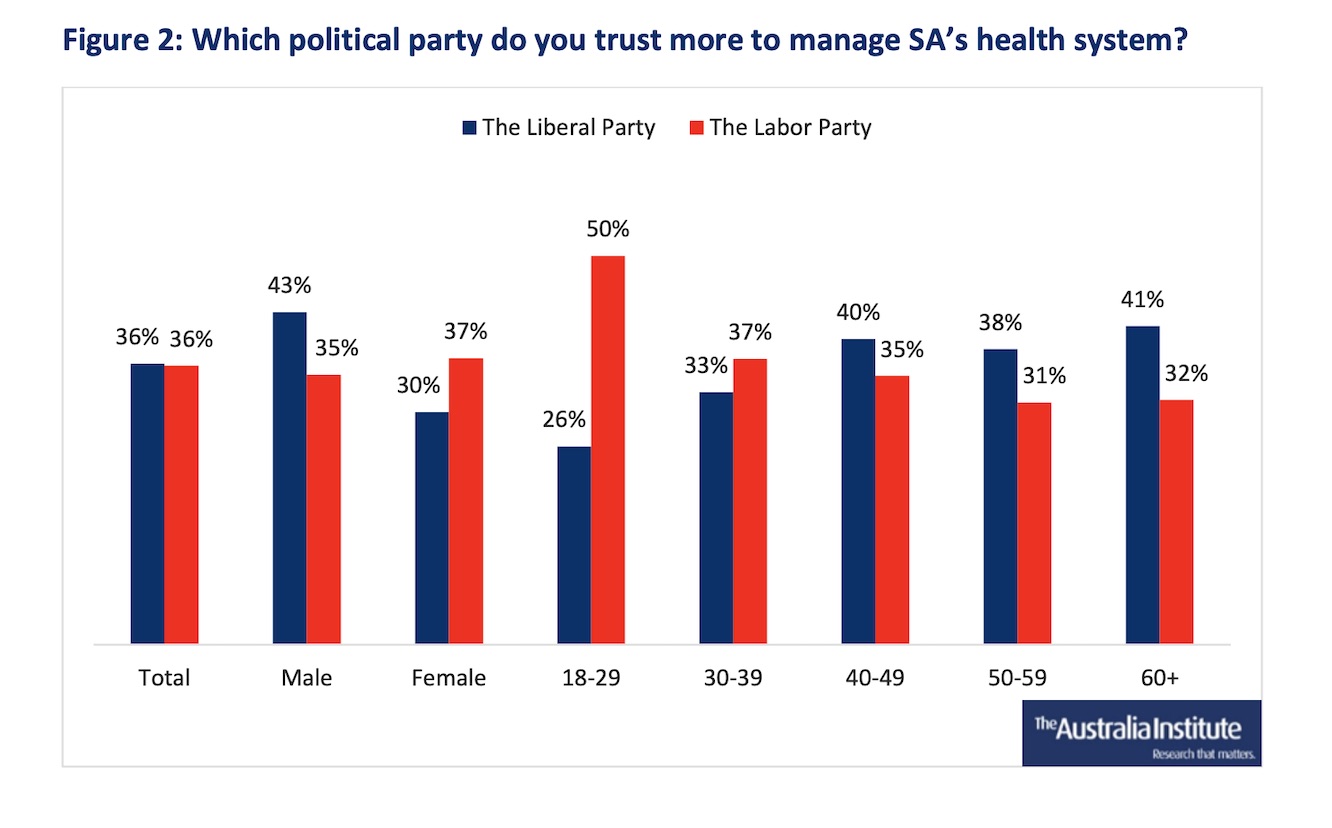 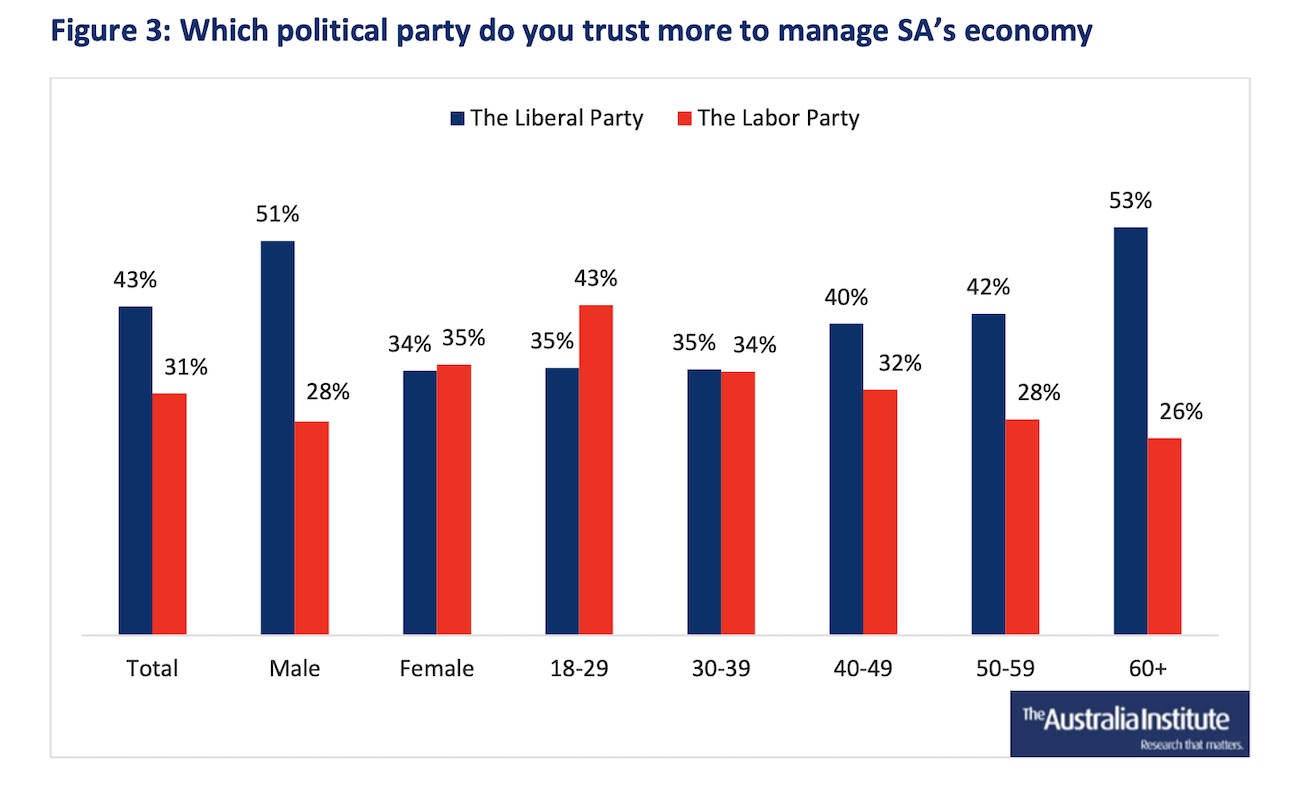 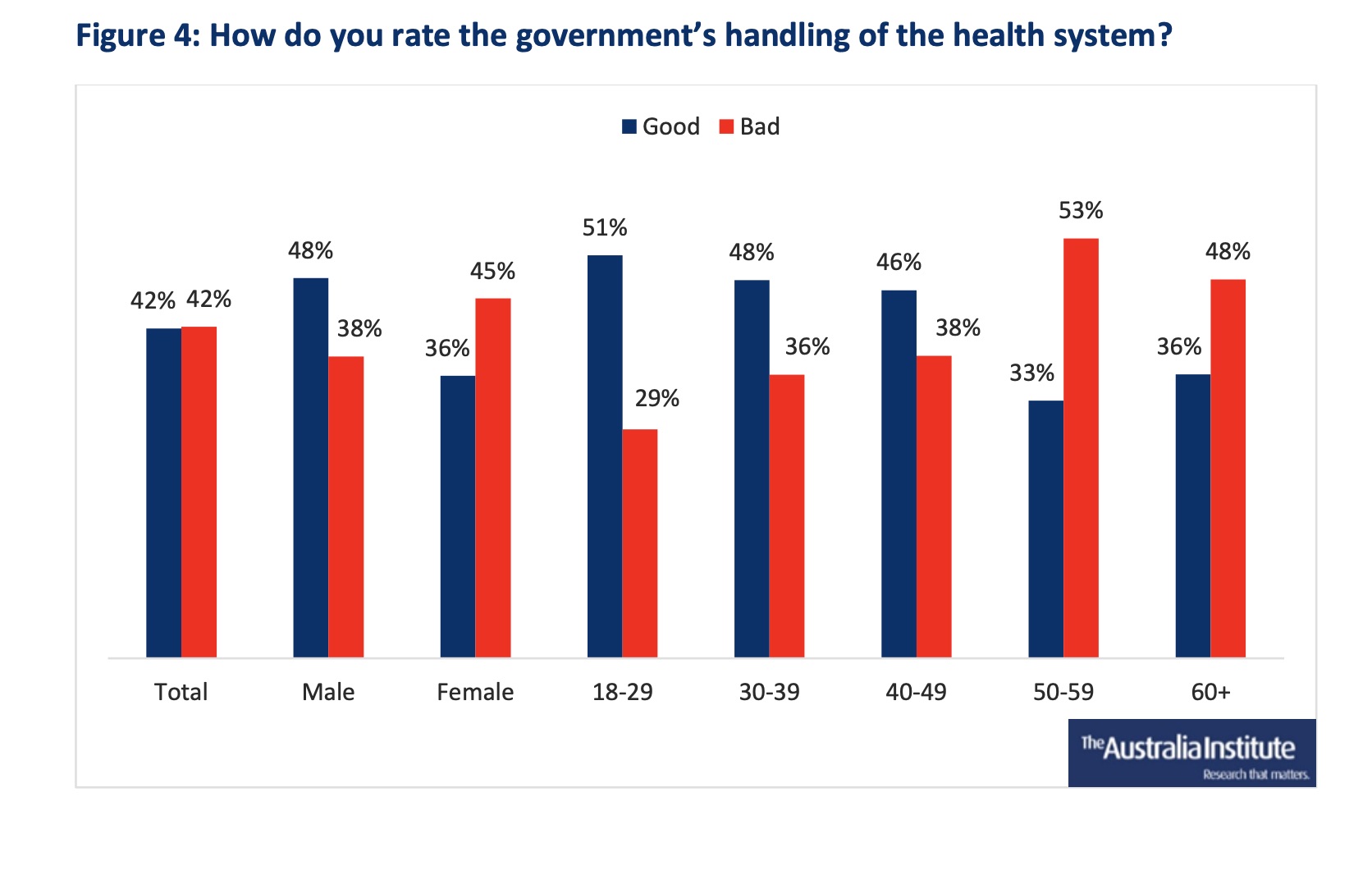