Chief public health officer Professor Nicola Spurrier said this morning that the latest infectious truck driver to have entered South Australia was in the state on September 2 and 3.

She said the driver, who was carrying timber, stopped off at a BP petrol station at Wingfield, but she was unsure of the exposure time, with SA Health expected to update its exposure site list later today.

Nearly 1000 close contacts linked to the infectious drivers are currently in 14-day home quarantine. Over 90 per cent of those have so far returned negative test results.

The latest case has prompted SA Health to consider mandating COVID-19 vaccinations for truck drivers who enter the state.

It is also considering opening pop-up vaccination clinics at popular truckie stops to make it easier for truck drivers to comply with the proposed requirement.

“Dr Chris Lease, one of my deputies, spoke to some of the freight leaders yesterday and we are indeed looking the requirement for vaccination for freight workers in South Australia,” Spurrier confirmed.

“The industry is very supportive because they want to have their workers protected – particularly South Australian drivers that are going to New South Wales and Victoria.

“What we want to do is make sure that if we have a requirement that it is very easy for freight drivers to get vaccinated, so we are working through the nuts and bolts of that at the moment to make sure that testing is very easy, but also vaccinations are very easy.”

It comes after SA Health yesterday afternoon announced it had identified two exposure sites at businesses linked to one of the previously-reported infectious truck drivers.

But authorities have refused to name the businesses, saying they pose no risk to the public as they are only frequented by staff, who are required to get tested and quarantine if they are identified as close contacts.

One of the sites has been revealed as Big River Pork abattoir in Murray Bridge, but Spurrier said the public should not be concerned as authorities have already ensured that staff who came in contact with the driver are in quarantine.

She said about 80 of the 300 staff who work at the abattoir are yet to be tested, but so far no positive cases have been identified.

Meanwhile, the state’s transition committee this morning decided to increase the number of people allowed at private activities and functions such as weddings and birthday parties held outside the home from 50 to 150.

But the events must have a QR code, a COVID-19 marshal and adhere to a one person per two-square-metre density cap if people are standing up while drinking.

More than 150 people can attend weddings at licenced venues, provided they still comply with the one person per-two-square-metre density cap.

Dancing is still limited to the bridal party and home gatherings remain capped at 20 people.

“What we’ve done today is we’ve aligned private activities outside licenced premises with the requirements that we’ve put in place for activities which are held on licenced premises, so there is parity across the two types of activities,” Police Commissioner and state emergency coordinator Grant Stevens said.

“We are not making this complicated on purpose – we’re trying to find a way to free-up activity as much as possible – but maintain a level of safety based on the concerns we have with New South Wales, ACT and Victoria and the emerging threat we see from transport workers entering the state.

“Whilst they (truck drivers) are complying with the obligations that we place on them, they are presenting a risk that we have manage.”

The transition committee made no changes to the state’s border restrictions. 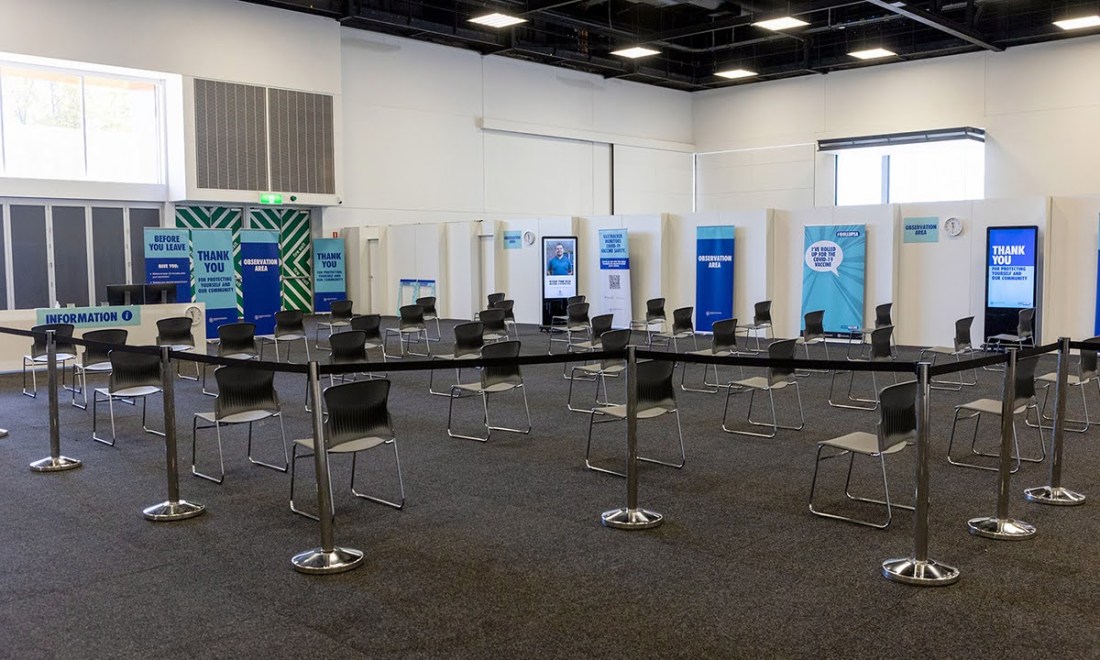 The Government has announced that it will double the size of the Wayville vaccination clinic in line with a scheduled increase in Pfizer supply.

The pavilion area next to the existing clinic will be used to increase the number of vaccination stations at the clinic from 42 to 96, allowing SA Health to open 35,000 more appointments.

It comes after the Federal Government secured additional Pfizer supplies from the UK and Singapore, with Moderna vaccines also expected to be made available later this month.

Latest Federal Government data, released yesterday, shows 55.6 per cent of South Australians have received their first dose of a COVID-19 vaccine, while 37.3 per cent are fully vaccinated.

South Australia has the third lowest vaccination rate in the country, with only Queensland and Western Australia lagging behind.

But Premier Steven Marshall today said that all jurisdictions would “probably arrive at that (80 per cent) double-dose (target) for 16 and over around about the same time, with the exception probably of New South Wales and maybe Victoria, where they have had a much higher uptake of AstraZeneca”.

“That increased their coverage and we haven’t had that in South Australia, so we’ve been basically with the AstraZeneca for the 60 and over (age group) – we haven’t had a lot of younger people take up that opportunity,” he said.

“Obviously it’s a different situation in this state, compared to what they’re facing in (New South Wales).”

Victoria today recorded 246 new COVID-19 cases, including 156 which are not linked to known sources, while New South Wales reported another 1220 new cases and eight deaths.