A Right-faction takeover push after a concerted membership drive targeting Evangelical-based Christian conservative recruits fell short at the party’s Saturday AGM, with the moderate group retaining a reduced majority on the state executive after a series of tight ballots.

While the Right are vowing to continue the recruitment campaign in a bid to bolster their numbers, the short-term fallout will see support for conservative-aligned crossbenchers Duluk and Ellis fail to materialise when state executive considers their fate.

Duluk suspended his party membership and was banished from the Liberal party-room last year when he was charged with basic assault over his actions towards SA Best MLC Connie Bonaros at a boozy 2019 parliament house corridor Christmas party.

He was last month acquitted, but magistrate John Wells nonetheless delivered a scathing critique of his behaviour, saying he had acted like a “drunken pest”.

Ellis is due to face court late this year on charges relating to the alleged misuse of the country members’ accommodation allowance, following an ICAC investigation.

Premier Steven Marshall, who has a seat on state executive, has already declared he expects a stalled parliamentary investigation into Duluk’s actions will recommence, with Speaker Josh Teague to make a ruling on the inquiry – possibly as early as tomorrow.

“This is the executive that will determine [the matter of] Duluk and Fraser Ellis,” one moderate-aligned source said after the weekend AGM, when the Left won two of the four available vice-presidential vacancies to retain a 6-4 majority on state executive.

“The current executive will make a decision based on the best interest of the party, rather than of Sam.”

Asked whether they expected Duluk to run as the party’s candidate at the March state election, the insider said: “I’d be shocked.”

“It involves the party taking an enormous risk,” they said.

“I think it would be untenable for him to proceed to preselection.”

The source said it would be “untenable to leave [the preselection unresolved] much past October”, when the state executive next meets.

However, if the party moves against either MP, they will likely face retaliation on the House of Assembly floor, with Labor able to move no confidence motions or block legislation with crossbench support.

Waite is a safe Liberal seat, but Duluk has long indicated he will run as an independent if the party doesn’t re-endorse him, potentially creating a damaging three-cornered contest.

Ellis is similarly likely to garner strong support from local party members in Narungga as an independent Liberal.

He told InDaily today he was still “focussed on clearing my name” and remained “especially thankful to the community for their support”.

The Right had hoped to galvanise their new recruits for a concerted charge at the four vice-presidential positions, but only their two top selections, Liberal Mount Gambier candidate Ben Hood – whose sister Lucy is running for the ALP in Adelaide – and Ella Winnall, won through.

Moderate-backed incumbent Rose Miller was easily re-elected, while Luke Westernberg defeated Right-backed Tim Richardson, with the Centre Right understood to have voted with the moderates against him.

Moderate-backed party veteran Legh Davis easily held his role as president with the Right opting not to formally endorse his challenger Glenn Bain, instead telling delegates to vote “for your consideration”.

There were however an unusually high number of informal votes, while Bain received 53 votes without factional endorsement, to Davis’s 144.

The Right ticket was distributed via the faction’s “Believe in Blue” online recruitment portal. 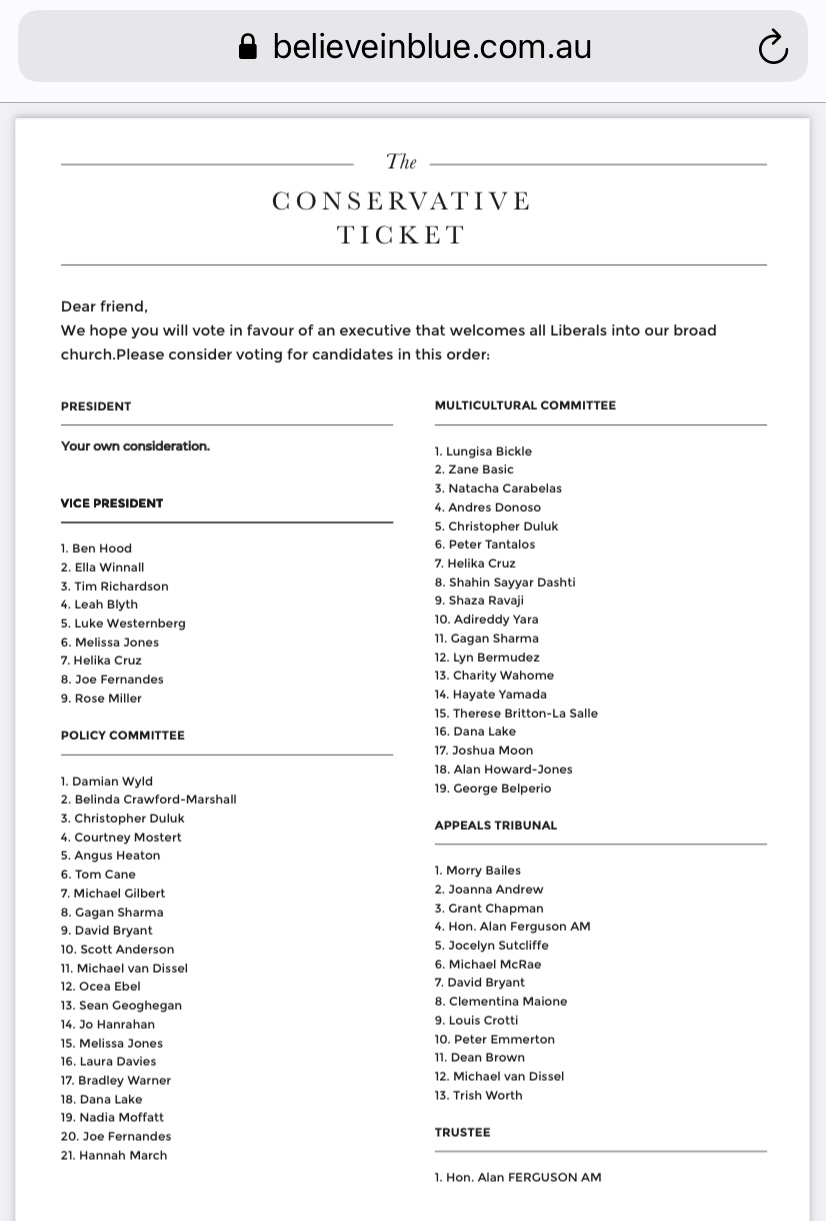 The Right faction’s ticket, with the Believe in Blue URL visible.

The result in each ballot but the final one came down to five votes or fewer, which sources say “indicates there’s an ever-diminishing middle ground on state council”.

“The Right have a long, consistent history of being overconfident and [the takeover] didn’t eventuate, as per usual,” one moderate source said.

“They had all kinds of tough talk about what they’d do with control, before they got control.”

While the Right wanted to back in its own candidate, the Left has bumped sixth-placed moderate Kathleen Bourne, a staffer to Health Minister Stephen Wade, up the ticket.

“It is what it is,” said one Right-faction insider after the AGM result.

However, they vowed that the faction was still building towards greater control within the party.

“Everything’s moving in a particular direction, without a doubt… we’ll look to next year,” they said.

“It was never going to happen overnight, and it shows a lot that we were in striking distance this year.

“The train’s not really slowing down – every day there’s more people joining… The Right will continue its march.”