The plan, estimated to cost several million dollars to implement, contains over 200 commitments from South Australian Government departments – some of which are already in train – to address Aboriginal inequality.

New commitments include building a mental health and wellbeing centre specifically focussed on the needs of Aboriginal people, creating a peak body for Aboriginal children and young people and amending the state’s mining legislation to ensure Traditional Owners are better informed of what’s happening on their land.

The Government has also promised to create a working group to tackle the overrepresentation of Aboriginal people in the criminal justice system and to consider legislation to better recognise First Nations languages.

Premier Steven Marshall told InDaily that the plan was the start of a “10-year reform agenda” that set out how South Australia would reach the Closing the Gap targets.

The targets were agreed to by the Commonwealth, state and territory governments last year following concerns from Aboriginal leaders about stagnant progress on the previous Closing the Gap strategy, and a lack of government consultation.

Personally, I can see change happening

South Australia’s implementation plan was developed in conjunction with leaders from about 17 Aboriginal-controlled organisations, who have formed a peak body called the South Australian Aboriginal Community Controlled Organisation Network (SAACCON).

“We will be measured on how we change the way we engage with and do business with Aboriginal people, with the aim of eliminating institutional racism, discrimination and unconscious bias, and ensuring culturally-safe experiences for Aboriginal people when interacting with government agencies and services,” Marshall said.

“We have a long path ahead that will no doubt challenge and stretch us in ways that we haven’t experienced before.

“But, I’m sure that our strong and respectful partnership, and our capacity and willingness to lean on each other’s strengths will keep us on track.”

A state government spokesperson said there was no set funding attached to the plan, but SACCON lead convenor Scott Wilson, who is also director of the SA Aboriginal Drug and Alcohol Council, told InDaily that implanting all 200 actions would cost “some millions of dollars over a few years”.

“The whole idea is to try and change over a period of time the way that state government agencies, including local government, actually sit down and work with Aboriginal people and try and get better outcomes,” he said.

“Before, we might have got told ‘we’re going to fund this program isn’t that great right?’ when we had no involvement whatsoever.

“Personally, I can see change happening.”

Some of the new initiatives outlined in the plan include:

Wilson said the Government had also committed to sit down with Aboriginal leaders to figure out how it could improve services in a particular region, with a location to be chosen by November.

“We will select some area – a town, or it could even be a region of Adelaide – that is basically under-serviced and then work out what is it that this community may need in the future to ensure people that live there have access to health, housing and a range of other things,” he said.

“At the moment, what usually happens is a government agency puts out a tender to do something in a region and that might be the only thing that they fund in that region.

Wilson said he thought the Government was “fairly genuine” in its efforts to reduce inequality, but it hadn’t agreed to implement every idea that SACCON brought to the table, including a request to raise the minimum age of criminal responsibility from 10 to 14.

“Obviously, a lot of the programs or funding in the implementation plan is about trying to reduce reoffending,” he said.

“From my point of view, one of the easier ways to reduce juvenile detention rates is to raise the age of criminal responsibility (from 10) to at least 14 or 15.

“Overnight you could half the amount of youth that are actually in juvenile detention.

“That needs a bit more discussion between the government and those sorts of groups.”

Latest data from the Federal Government shows progress towards meeting the Closing the Gap targets is mixed.

Three targets are on track: healthy baby birthweight, the enrolment of children in the year before full-time school and youth detention rates. 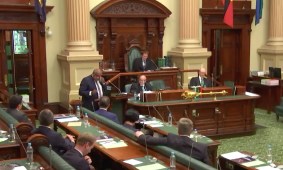 But the remaining four goals, including life expectancy, adult imprisonment, out-of-home care for children and suicides, are not on track.

The release of South Australia’s new implementation plan comes after the state’s Aboriginal Engagement Commissioner Roger Thomas told parliament in December that Aboriginal people still experience “institutional and systemic racism” in their dealings with the Government.