NSW has reported 1164 new locally-acquired cases of COVID-19 and three deaths, including a woman in her 50s, as the entire state remains locked down.

Police are cracking down on lockdown compliance as authorities battle to contain the spread of the virulent Delta strain.

It comes as NSW surpasses two-thirds first-dose vaccination coverage for eligible residents. The government will restore freedoms to the fully-vaccinated at 70 per cent double-dose coverage.

There are now 841 active cases of COVID-19 in the state and 31 of Tuesday’s new cases are yet to be linked to existing outbreaks.

The state’s exposure site list has jumped over 1000, with nearly 150 new sites added in the past day including several train lines and a Port Melbourne construction site where a new primary school is being built.

Across the Tasman, COVID-19 case numbers in New Zealand have declined for the second consecutive day, falling to 49.

NZ completed a fortnight in lockdown on Tuesday, and will begin to loosen restrictions for places outside Auckland from tomorrow.

Harvey Norman has revealed it repaid more than $6 million in federal government JobKeeper wage subsidies following repeated lobbying as it reported a net profit of  $841 million for 2020-21.

The Gerry Harvey-led group in August returned to taxpayers all of the $6.02 million in wages and support collected since the coronavirus pandemic began in March last year.

Harvey had previously defended his decision to retain the funds despite repeated calls by unions and others that it be repaid.

They had argued the money was supposed to help struggling businesses get through the COVID-19 crisis and retain their staff, and Harvey Norman was not viewed as struggling.

Harvey Norman on Tuesday posted a “solid” lift in annual profit with Harvey praising the group’s ability to navigate the coronavirus pandemic.

Net profit for 2020/21 rose to $841 million, including outlet property valuations, and was up 75 per cent from the previous financial year.

Police are hunting for a driver and his ute after a patrol car was rammed at Smithfield in the early hours of this morning.

Just after midnight, police stopped a white single cab ute on Anderson Walk, where the vehicle reversed at the patrol car.

The ute then continued on Beaumont Rd.

The officers in the patrol car received minor injuries.

The announcement at 11pm last night lists the On the Run service station at Port Wakefield as a Tier 2 site.

SA Health advises people who were at the service station yesterday (Monday August 30) between 1.50pm and 3.20pm to immediately quarantine for 14 days, get tested immediately and get tested again on day 5 and day 13.

The Metcash Distribution Centre at 50 Port Wakefield Rd has been listed as a Tier 4 exposure site yesterday between 8.30am and 9.30am.

People who were at this site should monitor for symptoms and get tested as soon as they develop.

It comes as the state’s transition committee prepares to meet this morning, and after the SA authorities reversed a decision that would have required cross border community members to be vaccinated if they wanted to travel between South Australia and Victoria from September 24.

The decision to exclude people in the 70km border bubble from the compulsory vaccination direction was announced by SA Police yesterday afternoon, after they were included in the original direction published on Friday.

The backflip has been welcomed by several regional communities, particularly in the state’s South East.

“Cross Border Community Members who usually reside in the Victorian Cross Border Corridor are not required to have a COVID-19 vaccination by 24 September 2021,” the SAPOL direction 46 says.

“All other Essential Travellers will be required to have at least one TGA approved vaccination by this date.

The South Australian Jockey Club has started the search for a developer to drive its $500 million revamp of the Morphettville Racecourse, which includes more than 500 homes and a 136-room hotel.

The club today launched a formal Expression of Interest to develop up to 10 hectares of rezoned land between the track and Anzac Highway.

Stage one includes 150 “modern lifestyle” apartments above a retail complex comprising a tavern, supermarket and specialty shops with direct access to the tramline.

A 136-room hotel is also planned for the Anzac Highway frontage.

“We have developed a comprehensive concept master plan but we’re inviting developers to partner with us and use their expertise to help us make the most of the opportunity,” SAJC CEO Grant Mayer said.

BHP has started delivering vaccinations at its own hub in Queensland as it considers setting up a mobile service at Olympic Dam. Photo : Daryl Wright

Mining giant BHP is considering mandating COVID-19 vaccination for anyone entering its worksites and offices as it works to establish a mobile vaccination clinic for SA miners at Olympic Dam.

It would be the third major company to bring in a vaccine mandate after airlines Qantas and Virgin.

BHP says it is working with the SA Health Department to establish a mobile clinic at Olympic Dam to help bolster vaccination rates in the Roxby Downs region.

Australia’s second-largest listed company has also this week started a workplace vaccination trial at the Mt Arthur Coal Mine in New South Wales’ Upper Hunter region and is also funding vaccination hubs near its mines in Central Queensland and WA’s Pilbara region.

BHP Minerals Australia president Edgar Basto said the mandatory vaccination policy will likely come into effect in early 2022 after all staff have had ample time to get the jab.

“As a necessary control to protect the health and safety of our people and the communities where we operate, we are actively assessing vaccination as a condition of entry to our Australian sites and offices,” Basto said.

“We have an obligation to ensure our people are safe when they are at work and to support the health of the regional communities where we operate.

“Our experience in our Chilean operations, where workplace and community vaccination hubs have helped get local vaccination rates to nearly 90 per cent, show it can be done well.”

The airline will soon begin talks with employees and unions about a proposal requiring all frontline workers to get vaccinated by November 15 and all office-based staff by March 31, 2022.

Qantas has given pilots, cabin crew and airport staff three months to get fully vaccinated.

The deadline for other workers, such as those in head office, to receive both doses is March 31 next year.

ACT Chief Minister Andrew Barr is set to announce whether Canberra’s lockdown will be extended again as COVID-19 cases continue to climb.

Another 12 cases were reported on Monday, half of them unlinked and at least six of which were in the community while infectious.

It comes as nearby NSW reported a record 1290 new locally acquired COVID-19 cases in the 24 hours to 8pm on Sunday, and another four deaths were recorded including the first Aboriginal person in Australia to die from the virus.

Barr hit back at federal warnings of cutting financial support should states and territories keep locking down once Australia hits vaccination thresholds of between 70 and 80 per cent.

“Let’s stop talking about 70 because it’s not safe at 70,” the chief minister told reporters.

“But 80 is the more realistic step. So, 70 will be a gentle step forward, 80 would be a more significant one.”

Meanwhile, Victorian health authorities are hopeful the state’s COVID-19 outbreak has stabilised, as the number of patients in hospital rises.

There were 73 new cases in total reported on Monday with 49  new cases in Victorian hospitals – up five from the previous day – with 15 in intensive care and 11 on ventilators.

Goulburn Valley Health chief executive Matt Sharp said at least six people from the Shepparton outbreak had been transferred to Melbourne, as it continues to care for four other infected patients.

Although all 99 cases in the region are currently linked, Sharp stopped short of declaring the outbreak was fully contained after tallying a further nine infections on Monday.

“The only way we’ll get this under control is to have a number of consecutive zero days,” he said.

There are now more than 970 exposure sites across the state, including a ward at Dandenong Hospital, a school in Melbourne’s north and a Shepparton hairdresser.

A decision on how long the state’s sixth lockdown will be extended is set to be announced in coming days.

The United States has completed the withdrawal of its forces from Afghanistan, the Pentagon says, after a chaotic evacuation of thousands of Americans and Afghan allies to close out US involvement there after 20 years of conflict.

The operation came to an end before the Tuesday deadline set by President Joe Biden, who has drawn heavy criticism from both Democrats and Republicans for his handling of Afghanistan since the Taliban made rapid advances and took over Kabul earlier this month.

The withdrawal was announced on Monday by General Frank McKenzie, commander of the US Central Command, who said the final flights did not include some of the dozens of Americans who remained behind.

More than 122,000 people have been airlifted out of Kabul since August 14, the day before the Taliban regained control of the country two decades after being removed from power by the US-led invasion in 2001.

The US and its Western allies scrambled to save citizens of their own countries as well as translators, local embassy staff, civil rights activists, journalists and other Afghans vulnerable to reprisals.

The evacuations became even more perilous when a suicide bomb attack claimed by Islamic State – enemy of both the West and the Taliban – killed 13 US service members and scores of Afghans waiting by the airport gates on Thursday.

Biden promised after the bloody Kabul airport attack to hunt down the people responsible.

Two US officials said “core” diplomatic staff were among 6000 Americans to have left. They did not say whether that included top envoy Ross Wilson, expected to be among the last civilians to depart.

Balme to stay at Tigerland 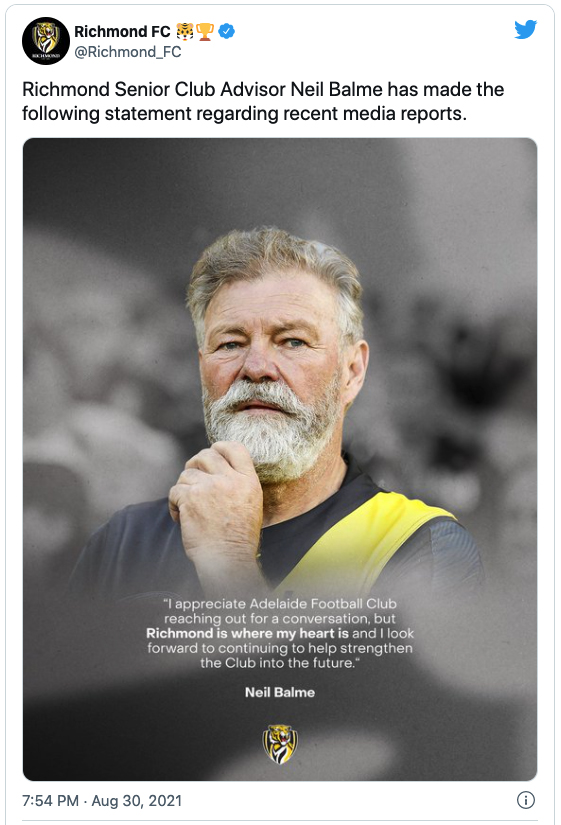 Adelaide has been unsuccessful in its pursuit of respected AFL club administrator Neil Balme, who will remain at Richmond after rejecting another approach from the Crows.

Adelaide attempted to recruit Balme to oversee their football department at the end of last year and a recent media report claimed they had finally been successful him to South Australia.

But Balme released a statement on Monday night declaring he will remain at Punt Road, where he has been a key figure in the Tigers’ recent period of success.

“I appreciate Adelaide Football Club reaching out for a conversation, but Richmond is where my heart is and I look forward to continuing to help strengthen the club into the future,” Balme said.

Balme was an important figure in successful periods for Geelong and Collingwood before joining Richmond as general manager of football in September 2016.

The Tigers had missed the finals that year but won three of the next four premierships, with Balme playing a “godfather” role behind the scenes.

Balme last year indicated he was open to the possibility of joining Adelaide in a similar position, but cited an “unusual medical condition” in his decision to remain with Richmond.

The 69-year-old played in the Tigers’ 1973-74 VFL premiership teams before embarking on a coaching career that saw him steer SANFL club Norwood to two flags in the 1980s.