Marshall told reporters a short time ago that the 89th Christmas Pageant would be held on Saturday November 13 at Adelaide Oval in the same format as last year’s ticketed “twighlight spectacle”.

He said organisers were yet to determine how many tickets will be allocated free of charge, with the event to be broadcast live for families who are unable to secure seats.

Last year’s Pageant was capped at 25,000 people and was staged off city streets for the first time in the event’s 87-year history.

Marshall said he hoped that the Pageant would return to its traditional street parade format next year, but ongoing coronavirus restrictions and the threat posed by growing outbreaks interstate meant the event would remain ticketed this year.

“There’s been a pretty serious deterioration in the situation around the country over the last three or four weeks with the delta variant,” he said.

“What we know is that seated, ticketed events outdoors are far more easy for us to control.”

“We have got an alternative here in South Australia (and) it worked very well to have the National Pharmacies Christmas Pageant at the Adelaide Oval last year,” he said.

“There was lots of smiles on the faces of everybody that attended, so Saturday November 13th the National Pharmacies Christmas Pageant will go ahead.”

Last year’s event prompted controversy when it was revealed that Adelaide Oval had sold tickets to the Pageant as corporate packages worth as much as $2250.

Marshall was later forced to intervene by asking the sales of corporate tickets to stop.

The pageant could remain a ticketed event until 2024, with InDaily reporting in April that Events SA had put out a tender document stating the event “may require ticketing services” from 2022 to 2024 due to ongoing safety concerns prompted by the coronavirus pandemic.

The Christmas Pageant, which is officially recognised as a “heritage icon” by the National Trust of Australia and a “state institution” by the SA Government, is traditionally a non-ticketed event and normally attracts up to 300,000 people along city streets.

The decision to keep this year’s Pageant as a ticketed event comes after both the Royal Adelaide Show and Bay to Birdwood events were cancelled this year due to COVID-19 restrictions and concerns about outbreaks interstate.

Marshall said ahead of this afternoon’s national cabinet meeting that South Australia aimed to start vaccinating young people aged 12 to 15 in term four this year after the Australian Technical Advisory Group on Immunisation approved Pfizer vaccinations for that age group.

But he said South Australia would continue to prioritise vaccinating people based on their level of vulnerability.

“We do have demand being much greater than supply at the moment,” he said.

“This is not peculiar to South Australia, it’s nationwide at the moment and so we really do need to allocate the available, finite doses of the vaccine to the most vulnerable.”

Marshall said the Government would finalise its plan to rollout vaccinations to 12 to 15-year-olds in the coming weeks.

He said there was a “great opportunity” to vaccinate young people while they are at school.

“It’s not going to work at every single school and… there have been some people who have already been pulled forward,” he said. 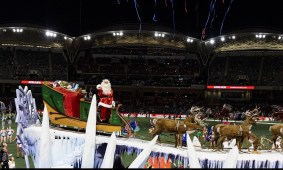 Christmas Pageant could be ticketed and off streets for years

“We now need to prioritise it against the other cohorts in our state.”

Latest Federal Government data shows 31.54 per cent of South Australians aged 16 and over have so far received both doses of a coronavirus vaccine.

Marshall said once 70 per cent of the Australian population is vaccinated, South Australian authorities would consider increasing the state’s medi-hotel capacity to 530 per week – the same capacity as before  the Modbury cluster outbreak.

He said National Cabinet would consider a report on the proposal at its meeting today.