The blasts killed  more than 70 Afghan civilians and scores more, while 11 US Marines and one Navy medic died.

US officials said one bomb detonated near the airport’s Abbey Gate and the other was close to the nearby Baron Hotel.

Video uploaded by Afghan journalists showed dozens of bodies and wounded victims strewn around a canal on the edge of the airport.

Defence Minister Peter Dutton said no Australians troops or officials were hurt, but Australian forces had now left Kabul after the decision to complete a final airlift yesterday.

“I just grieve, like every decent person would, at the loss of life and in particular for us, the loss of the American lives.” 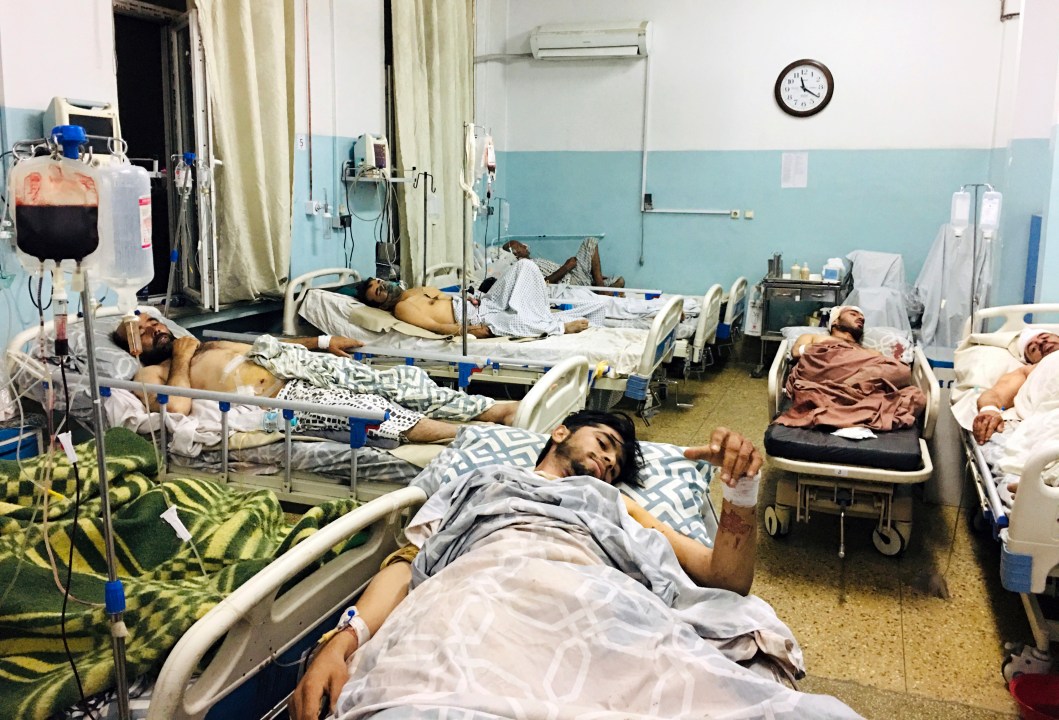 Islamic State militants have emerged in Afghanistan as enemies both of the West and the Taliban. A 2001 US-led invasion toppled the Taliban from power after the group had harboured the al Qaeda militants responsible for the September 11 attacks on the US.

The Department of Foreign Affairs and Trade had warned earlier on Thursday that people should not to travel to Kabul airport because of the risk of a terrorist attack.

“These people are more extreme than the Taliban and are basically at war with the Taliban – it is a horribly complex situation,” Dutton said.

“I’m very pleased and relieved our soldiers have departed from Kabul and we took the decision to lift the last of our people yesterday and they are safely in the United Arab Emirates.”

Australia helped about 4000 people escape Afghanistan, which descended into chaos after the Taliban rapidly seized control following a US decision to withdraw from the country after 20 years.

The US and its allies have mounted one of the biggest air evacuations in history, bringing out about 95,700 people, including 13,400 on Wednesday, according to the White House.

While the rescue mission exceeded the government’s expectations, some Australian citizens and hundreds of Afghans with visas remain in the war-torn nation.

Dutton said some people were being advised to go to other borders.

“We hope commercial flights are available again soon, but, as we’ve seen overnight, and as the intelligence continues to indicate, more terrorist attacks are likely,” he said.

The bombings inflicted the first US military casualties in Afghanistan since February 2020 and represented the deadliest incident for American troops in the country in a decade.

Marine Corps General Frank McKenzie, head of the US military’s Central Command, told a news briefing the explosions were followed by gunfight. McKenzie said the threat from Islamic State persists alongside “other active threat streams”.

“We believe it is their desire to continue these attacks and we expect those attacks to continue – and we’re doing everything we can to be prepared,” McKenzie said.

McKenzie added that future potential attacks could include rockets being fired at the airport or car bombs attempting to get in. McKenzie said he saw nothing that would convince him that Taliban forces had let the attack take place.

The US has been racing to carry out the airlift before its military is set to fully withdraw from the country by August 31. McKenzie said the evacuation mission was not going to stop.

“I think we can continue to conduct our mission, even while we are receiving attacks like this,” McKenzie said, adding that US forces will go after the perpetrators of Thursday’s attack.

McKenzie said there were about 1000 US citizens estimated to be still in Afghanistan. A spokesman for the State Department said more than two-thirds of these Americans had informed it they were taking steps to leave Afghanistan.