Shelter SA is calling on political parties ahead of the March state election to support a policy that would require developers to hand four per cent of housing in new developments to community housing providers free of charge for use as social housing.

If developers refuse to comply with the requirement, Shelter SA has proposed that they pay a levy to the State Government, to fund the construction of public housing.

The push is prompted by a “modest estimate” by Shelter SA that South Australia needs to build at least 20,000 social housing dwellings over the next five years to meet demand.

According to the latest Report on Government Services data, there were 32,147 social housing dwellings in South Australia last year, down from 41,638 in 2011.

Many on the public housing waiting list have been pushed out of the private rental market, with Anglicare SA estimating that of the 1788 private rentals advertised in Adelaide on March 26 this year, zero were classed as affordable for single people on income support.

The median private rental price in metropolitan Adelaide is $369 per week, according to latest data from the State Government. 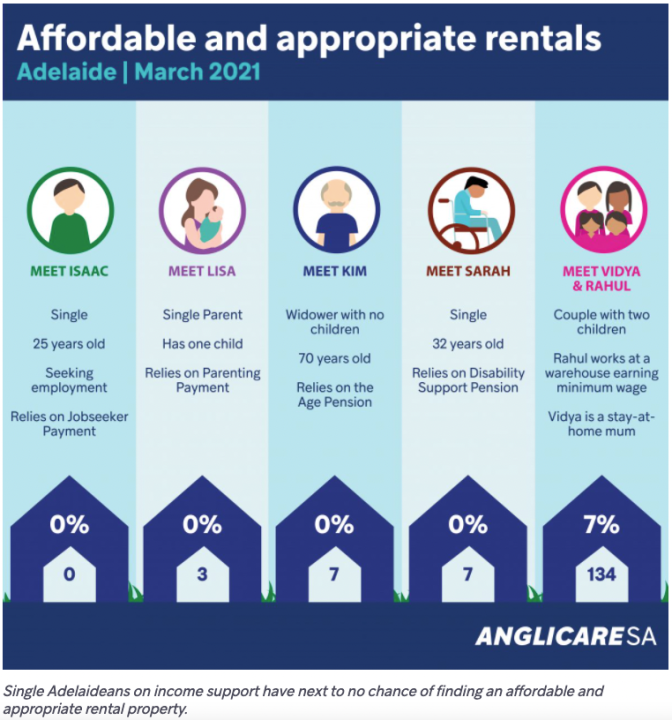 “The private rental market is completely stretched, there’s a vacancy rate of below one per cent in almost every suburb across the state, so hundreds of people are going to open inspections and only one person or family can access the property,” Shelter SA’s executive director Alice Clark said.

“At every turn, the system is under a huge amount of pressure.

“If we don’t strive for structural reform, I think we have little hope of addressing any of those problems.”

Currently, all new “significant developments” in South Australia must comprise at least 15 per cent affordable housing, but there is no rule mandating the inclusion of social housing.

This would really be a game-changer

The State Government defines affordable housing as being priced at $367,000 or less, or in some circumstances up to $422,050.

Welfare advocates argue that price point is out of reach for the majority of people on low incomes.

According to analysis by the South Australian Council of Social Service, even if a single person had significant starter capital and support, they would need to earn $48,640 per year to borrow $300,000 with payments of less than 30 per cent of gross income.

That would place them on the threshold of the middle-income bracket.

Those on a single-age pension with supplements have an annual income of $25,000 per year, while income support for someone on JobSeeker with two children is around $32,000. 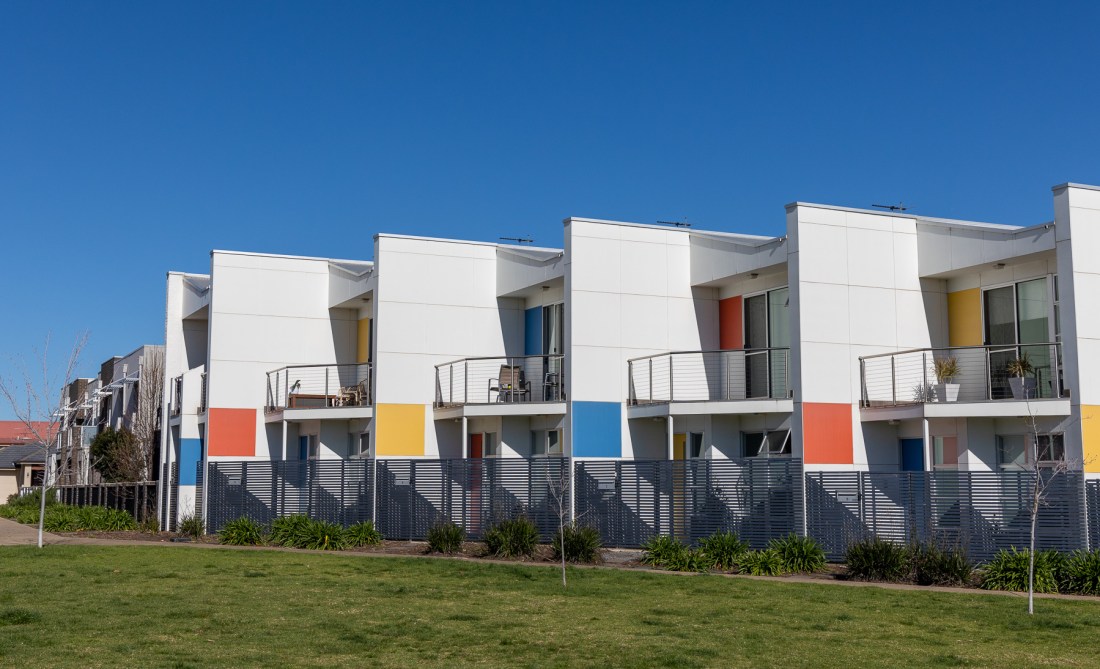 “Clearly homes requiring income of around $48,000 per year are nowhere near affordable for such social security recipients,” SACOSS wrote in a recent submission to a parliamentary enquiry.

“Given that those on the lowest incomes are precluded from this ‘affordable’ home ownership because they can’t afford it, it is again clear that support for home buyers is primarily directed to middle income households.”

If the housing is not purchased by eligible households in the first 90 days, it can then be sold on the open market.

New data tabled in parliament this week shows the majority of homes that are offered through HomeSeeker SA are sold outside the exclusive listing period.

Of the 521 houses that were offered under the program last financial year, only 207 were purchased by eligible buyers within the exclusive listing period. 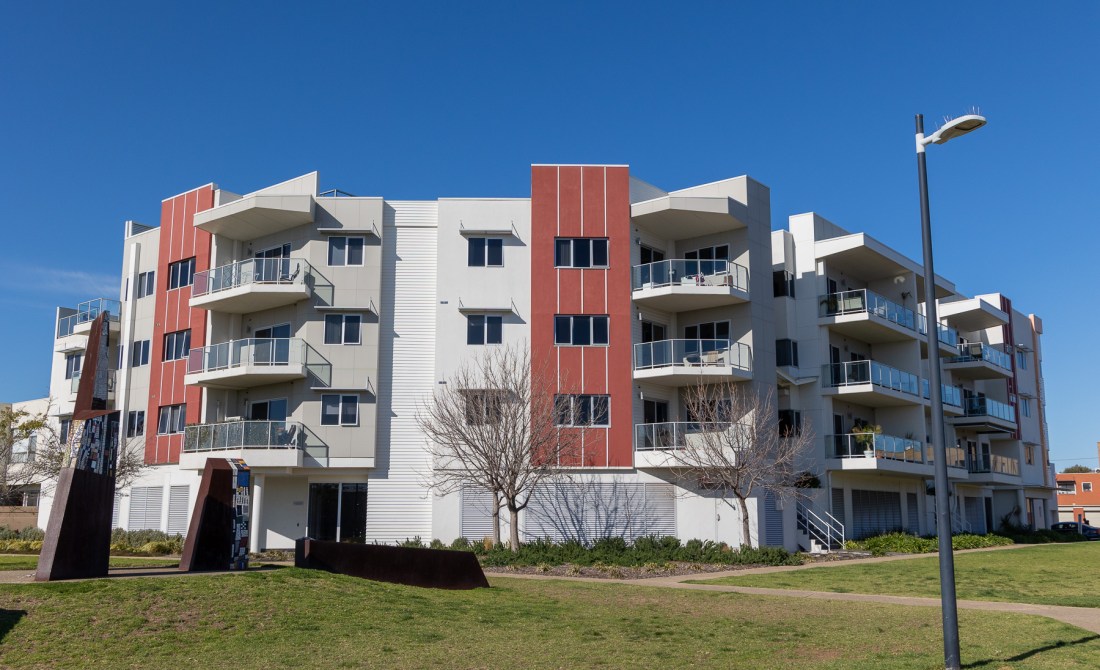 Shelter SA wants to change the definition of “affordable housing” to house and land packages that are worth $200,000 or less to make it easier for people on low incomes to afford a home.

Clark said the price point could be achieved if the homes were built on publicly-owned land or on smaller blocks, with a modular design.

“Lets create a different housing product, whether it’s through smaller land lots or modular builds so that we can have a product that’s actually affordable for all those people who are needing housing, who are stuck in unaffordable private rentals, on the social housing waiting list etcetera,” she said.

“This would really be a game-changer.”

Urban Development Institute of Australia SA CEO Pat Gerace described Shelter SA’s policy as “blunt” and “unworkable”, saying it would impact project viability and drive up the house prices even more for other purchasers.

“To put forward a policy based upon those buying property not paying their fair share of tax is ludicrous, because that’s what this means,” he said.

“A better life for some South Aussies isn’t to make a basic home more out of reach for some by making others pay for it, because this is what happens if it is imposed at the local level.”

Gerace suggested that more social housing could be built if the Government used the money it collected from land tax and stamp duty.

He said the onus of building social housing shouldn’t be placed on private developers, rather community housing providers who operate with tax concessions or the State Government.

“This year alone and just at the state level there is an estimated $1.283 billion in land tax and stamp duty to be collected and all of this already gets added to the price of property or increases rents,” he said.

“While there is still much more we can and should do to make housing affordable, we shouldn’t forget that there are already many excellent community housing providers operating in the market with tax concessions and planning system advantages over the private sector to deliver for those in need.”

Clark conceded that mandating the inclusion of social housing in new developments and lowering the price point for affordable housing “might be drawing a long bow”, but she said South Australians needed to start thinking about innovative ways to help those on low incomes into housing.

“Leading up to this election we could dance around the edges on this issue or we could ask for strong, structural reform and we’ve gone with the latter,” she said.

“We’ve been around and spoken to a number of Members of Parliament already and they’ve said, ‘but the developers won’t like this’ and my reply has been, ‘Shelter SA is not in the business of pleasing developers, we need more housing on the ground for the people who need it the most’.

“Social housing is part of the social good and should be considered a critical part of creating the types of communities that we want and need.”