Walker was suspended for the final three games of Adelaide’s season and the first three of 2022, having apologised for a racist comment about Indigenous North Adelaide player Robbie Young – a Narungga/Ngarrindjeri man who previously played three games for St Kilda in the AFL – during a Crows SANFL game last month.

The former Crows captain initially released a pre-recorded apology, accompanied by Young, but today fronted media to take questions for the first time – although he did not buy in to whether he intends to continue his career.

“Obviously there’s been some frustration as to why I’ve not been here as yet [but] there’s been a process I’ve had to go through to get to this stage,” he said, confirming all parties involved in the AFL-brokered conciliation had signed confidentiality agreements.

“I’d just like to say a huge sorry to all Aboriginal and Torres Strait Islander people for the pain and hurt I’ve caused – but thank you for the open and honest feedback from Robbie Young and the Indigenous boys at the club.”

He said he had had “some really open and honest conversations” with those four players – Ben Davis, Tariek Newchurch, Wayne Milera and Shane McAdam.

“I apologised and they accepted it,” he said.

“It’s been tough for everyone involved… I’m just so remorseful for the things that I said.

“We’ve had some really open and honest conversations and they’ve expressed the pain it’s caused – and that hurts.

“The four Indigenous boys, they were really open and honest with me, and I’m thankful for that because that’s going to help me going forward in understanding the pain I’ve caused their communities… they were as open and honest as they could be, and it’s up to me to repair that relationship.”

He said one of the things that “hurts me the most” was that “I’ve got some great relationships with Indigenous people”.

“I’ve apologised and I want to be judged on what I do from here on in,” he said.

“It’s certainly the toughest thing I’ve been through but it’s not about me – it’s about the people I’ve hurt.”

That also included his coach Matthew Nicks, who was brought to tears when reflecting on his conversations with former teammates Adam Goodes and Michael O’Loughlin after the incident, of which Walker said: “That hurt.”

But his own tears came as he reflected on the impact on his family.

“That’s been the hardest thing, that I’ve let my family down,” he said.

Walker won’t be drawn on his playing future, which remains clouded despite a contract to play on next year – after a season that saw him in Coleman Medal contention before his suspension.

“To me at the moment playing is not my priority,” he said today.

“Repairing relationships with people I’ve hurt is my main priority.”

That will include spending time in regional Indigenous communities, which he said he’s been counselled by “people I trust” to do.

Walker conceded he initially denied making the comment when it was reported by a Crows staff member.

“When I first was pushed on this I was in denial – I panicked and I was scared,” he said.

“I thought about myself… I let time go and I said to myself, ‘this is not about me, it’s about Robbie and the Adelaide official and the pain I’ve caused to them’, and that’s when I decided to come forward to own this.”

“I knew at the time I’d made the wrong choice of words,” he said.

“I hope I’m not remembered for one remark, and the people who know me understand the man that I am.” 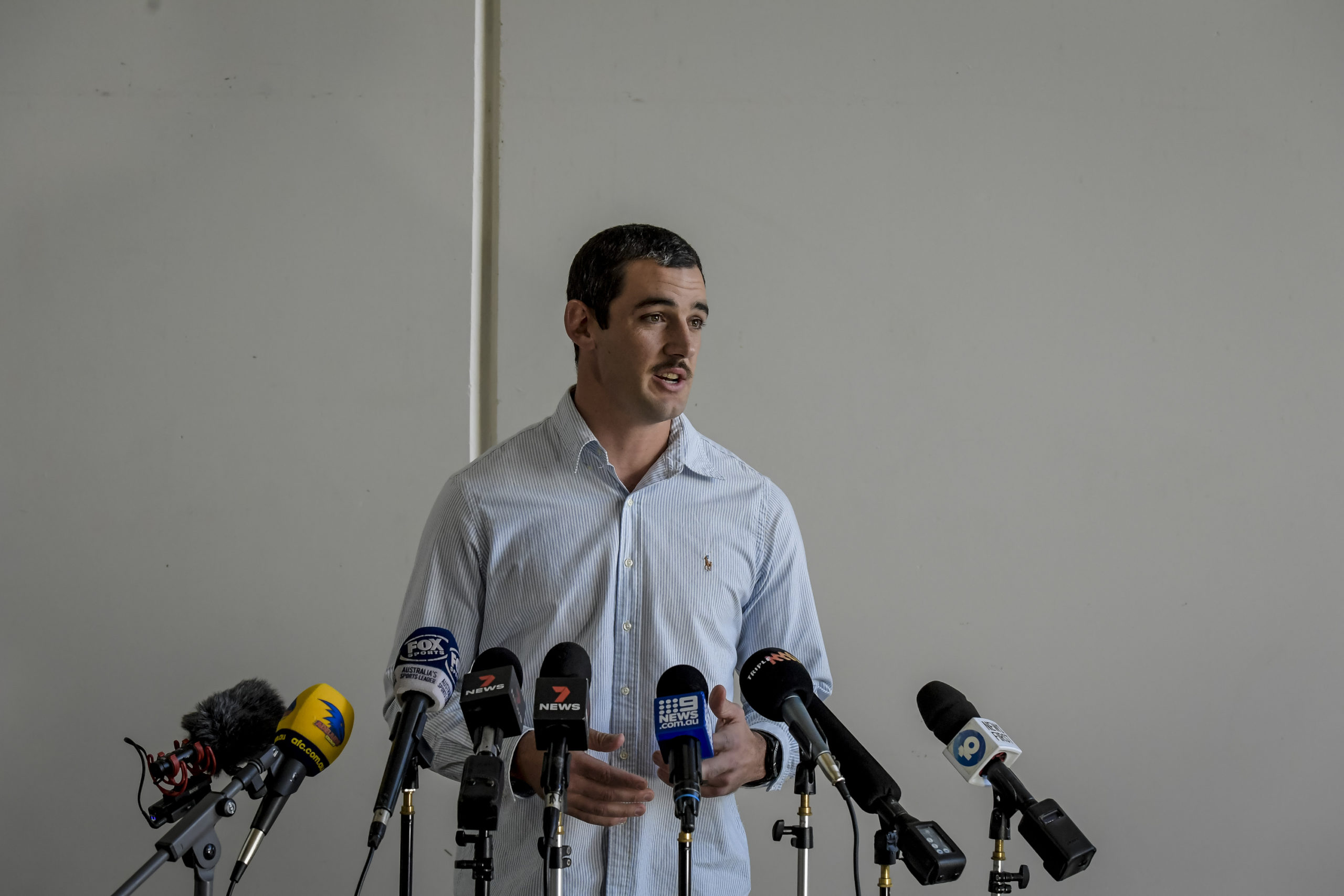 He said he had spoken to his former teammate Eddie Betts, for whose battles against racism in sport he had previously been a vocal proponent.

“I’ve spoken to Eddie, we had a great conversation,” he said.

“I’ve caused so much hurt to people like that and I can’t say how sorry I am.”

Asked how the incident had affected their relationship, he conceded: “I’ve got some work to do.”

“I’ve hurt him and his family and community, like I have all Aboriginal and Torres Strait Islander people.”

Walker revealed he had “expressed” a wish to attend this week’s Crows Best and Fairest function – where he would ordinarily be collecting the gong for leading goalkicker – “so that’s for the club to decide”.

“Hopefully people understand the kind of person I am – I’m ashamed of myself and I’ve got some work to do,” he said.

“It’s up to me to get to work and go and do the things I’ve spoken about.”

The AFL this month finalised an inquiry into the incident, which occurred at the Crows’ July 17 SANFL match against the Roosters at Prospect Oval, finding that Walker – who attended as a spectator – “made a racist comment regarding North Adelaide player, Robbie Young, to an Adelaide Crows teammate who was playing”.

“An Adelaide Crows official overheard the comment and reported the incident to the club who reported it to the AFL,” the league said in a statement at the time.

“The incident was then investigated by the AFL Integrity Unit under the Peek Rule [and] a complaint was laid under the AFL Rules which alleged that Taylor Walker had engaged in prohibited conduct.”

Walker apologised after a “successful” conciliation, later appearing with Young in a pre-recorded apology video – understood to have been made against the wishes of the club, which wanted him to front the media.

Walker was also fined $20,000 in the form of a donation to an Aboriginal and Torres Strait Islander Program in South Australia and is required to undertake an “education program”.