In a decision that will have significant political ramifications, the MP for the safe southern suburbs Liberal seat of Waite walked from court after being acquitted of basic assault, with magistrate John Wells finding that the testimonies of two key prosecution witnesses were “factually incompatible” and “cannot be reconciled”.

However, Duluk’s parliamentary career remains clouded, with Premier Steven Marshall calling for a stalled inquiry into his actions to immediately recommence.

Bonaros had told the court in June that Duluk had assaulted her at the December 2019 private corridor function by “whacking” her on the bottom with “a vigorous blow”, that Wells described as “loud and sufficiently forceful to make the alleged victim lose her balance”.

Duluk was entitled, uncouth and disrespectful… he behaved like a drunken pest

However, another prosecution witness, Greens staffer Emily Bird, gave a different version of events, telling the court “she saw the accused touch the alleged victim on the bottom in a brief patting motion, when they were both walking side-by-side”.

By her account, the touch “was neither loud nor powerful enough to unbalance the alleged victim,” Wells said in his summing-up.

“I conclude that both the alleged victim and Ms Bird are honest witnesses [but] honesty does not necessarily mean evidence is reliable,” the magistrate found.

“I have found that there are two substantially different versions.”

He said both witnesses were “separately credible [and] believable… but jointly unreliable”.

Wells declared Bonaros “an honest witness”, who was “open”, “believable” and “objectively logical”. He also declared Bird an “honest and credible witness” whose “clear, calm and unhurried” evidence was “rational and logical”.

However, he said in his judgement, “they cannot both be accurate beyond reasonable doubt… because they each give a markedly different version of the physical touching”.

“There is therefore an essential uncertainty about what actually happened [and] the two versions cannot be reconciled,” he said.

In explaining his reasons, Wells noted the intense public scrutiny of the alleged events, saying: “No criminal trial takes place in a vacuum, removed from community debate and discussion.”

“Those conversations are important, but criminal trials are decided on evidence,” he said.

“This trial turns on the circumstances and precise details of the alleged physical contact between Mr Duluk and Ms Bonaros.”

Wells concluded: “It follows, Mr Duluk, that I must acquit you – I formally find you not guilty.” 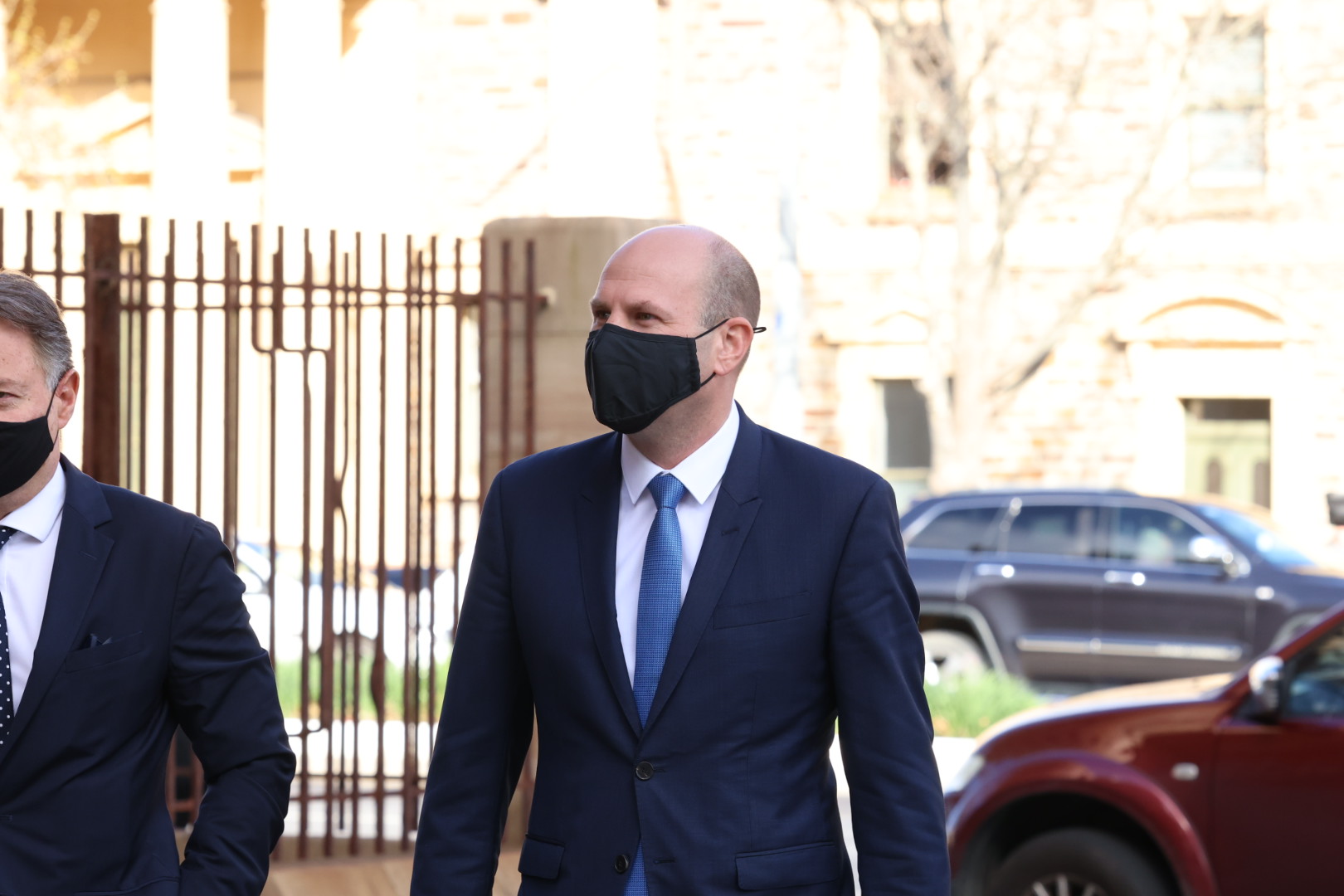 However, he gave the MP a dressing-down, telling him: “Part of the reason you are now standing here today is because of your excessive alcohol intake – I hope you have reflected on that [and] I hope you’ve given some consideration to changing your habits.”

Wells said he was satisfied by evidence of Duluk’s behaviour at the party separate to the alleged assault, which included grabbing a bottle of spirits and holding it up to Bonaros’s mouth, telling her he had alcohol in his office while asking her to accompany him there, and throwing ice around the party, including an attempt “to put ice down the front of the alleged victim’s dress”.

“There is no doubt the accused treated Ms Bonaros poorly,” Wells found.

“He was insensitive to her discomfort. He was entitled, uncouth and disrespectful.

He told Duluk: “Your behaviour towards Ms Bonaros does not, in law, amount to a criminal offence – but it was rude, unpleasant, insensitive and disrespectful,” Wells said.

“You owe her an apology.” 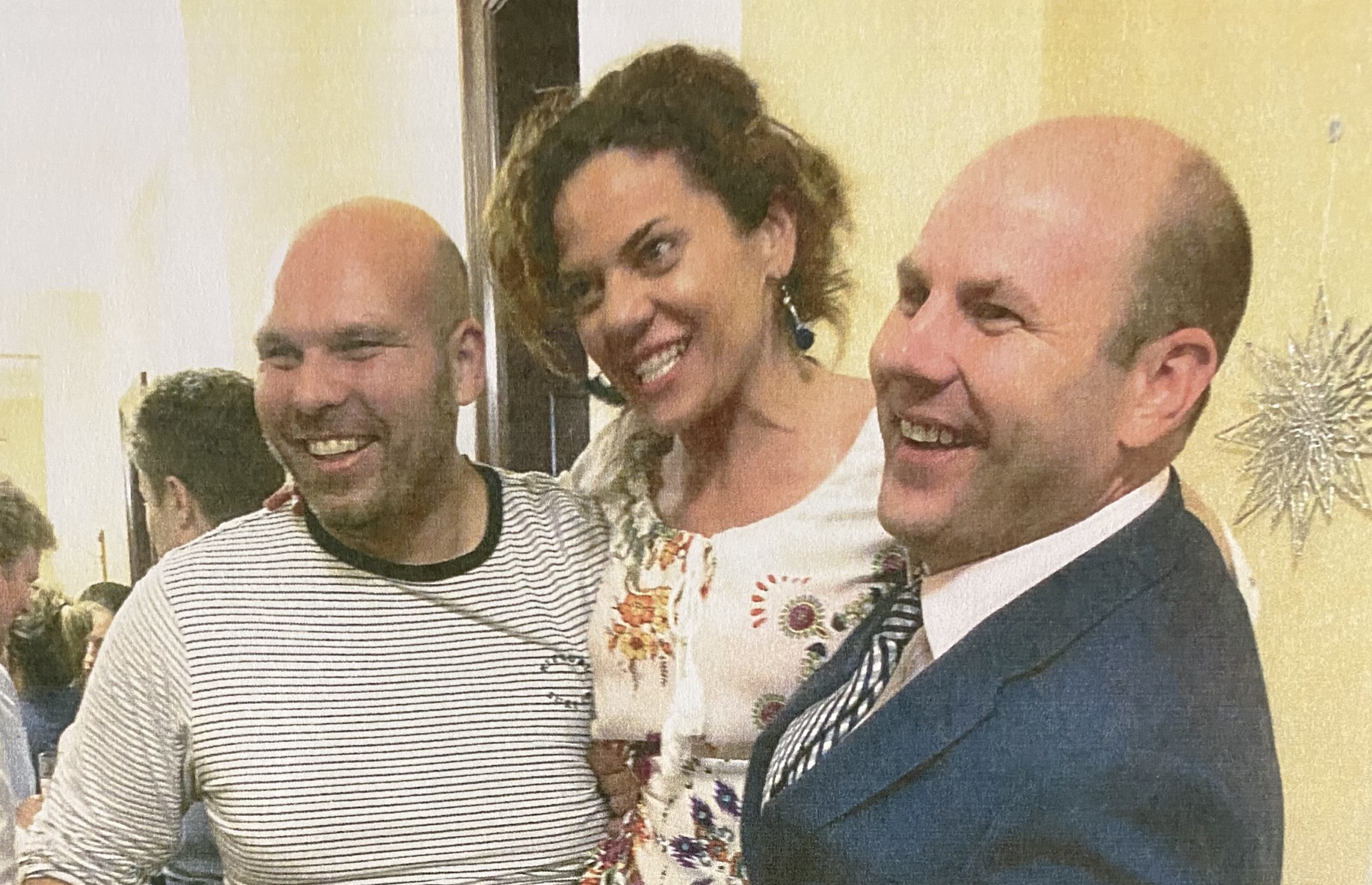 Sam Duluk, right, with his accuser SA Best MLC Connie Bonaros and Labor MLC Justin Hanson at the 2019 Christmas function, in a photograph tendered as evidence and supplied by the court.

However, in a statement released late today, Bonaros said she did not want an apology, but rather “the right of all women and girls to be safe”, saying: “Enough is enough.”

Duluk left court without answering questions from waiting media but later released a written statement saying he was “grateful for the opportunity to clear my name”.

“This morning I was found not guilty of the charge brought against me,” he said.

“I would like to express my gratitude to my family, friends, and the many people in my community of Waite for their support and encouragement.”

Duluk has previously, in January last year, apologised publicly for “behaviour which was unacceptable on any view” and resolved to seek counselling on his alcohol use.

Today, he said: “In reflecting on the magistrate’s remarks, I reiterate the personal apology I conveyed to Ms Bonaros after the event.”

“Whilst the last 20 months have been challenging, and a period of deep personal reflection, I am dedicated to continuing to serve the people of Waite,” he said.

“I will continue to work closely with my community and colleagues to champion the issues that matter to the people I represent.”

However, his status in the Liberal Party has long been clouded in confusion, with the MP maintaining he had voluntarily relinquished his involvement pending the court proceedings – however he has continued to maintain his financial membership.

However, in February last year, Premier Marshall insisted he had banished the Waite MP from the Liberal party-room, saying he had become aware of “further allegations [that] were not brought to my attention by Mr Duluk”.

“The type of behaviour that has been publicly canvassed is completely unacceptable and falls well short of the standards expected of all Members of Parliament,” Marshall said at the time.

Former Speaker Vincent Tarzia had initially instigated a private investigation into Duluk’s alleged actions at the Christmas party, which was halted when Bonaros pursued legal proceedings.

However, in a dramatic development today, Marshall responded to the court’s decision with a statement suggesting that investigation should now recommence.

“Whilst it is a matter for the Speaker and Parliament, now that the court case has concluded, we would expect the Parliamentary Investigation to continue,” Marshall said.

“Regarding the question of if Mr Duluk will come back into the Liberal Party – that is one for the Liberal Party to make but I would assume the Party would also await the outcome of the parliamentary investigation before making a decision.”

InDaily has sought a response from current Speaker Josh Teague.

Greens MLC Tammy Franks, who attended the party but did not witness the alleged assault, and who provided written evidence to the court on behalf of the prosecution, today wrote to Teague requesting “the resumption of the [former Speaker’s] suspended investigation into the events on and around 13 December 2019 involving the Member for Waite”.

In an email sent to several parliamentarians, Franks said her own evidence to the investigation “covered far more than the basic assault incident”, adding that “I have previously provided the private investigator directly with a list of further people to be interviewed and he was in the process of checking those with the previous Speaker before contacting them”.

“They were never contacted before the Speaker’s investigation was suspended… I am more than happy to provide that list again if required,” she wrote.

Liberal Party state director Sascha Meldrum told InDaily today: “If an application is made by Mr Duluk to resume his membership, then the Executive will consider the matter.”

The Liberal state executive has been under pressure from Duluk’s Right-faction-controlled Waite electorate to delay preselecting its candidate for next year’s state election until his trial was concluded.

However, moderate forces have been mobilising in the seat, with a new branch established in recent weeks, dominated by Left-aligned members.

A meeting of the new venture this month was attended by former Premier Dean Brown, who endorsed his former frontbencher Wayne Matthew as the branch’s Treasurer.

“Sam Duluk should stay out of the party but for some reason Steven Marshall doesn’t seem to understand that,” she said.

She supported the private investigation continuing, saying: “We do need to know everything that happened that night.”

However, she said the details already canvassed in court “should be enough for the Premier to rule out Sam Duluk returning”.

Duluk’s future is significant for both major parties.

The Marshall Government slid into a parliamentary minority after the Waite MP was joined on the crossbench by first-term Liberal Fraser Ellis, who is fighting a separate charge relating to the alleged misuse of his country members’ allowance.

Labor has courted Duluk for his vote on key divisions since, and it’s expected he will re-contest his seat as an independent – with the backing of many party members in Waite – if the Liberals do not endorse him.

Late today, Bonaros released a lengthy statement of her own, saying she was on sick leave and did not attend court today but had been briefed by friends and colleagues who were present.

“I understand Magistrate John Wells – while acquitting Mr Duluk – labelled his conduct towards me as ‘entitled, uncouth and disrespectful’ – it was,” she said.

“I am currently on sick leave from my parliamentary job which – while not related to the … trial – has not been helped by the fact the verdict was handed down today.

“The events of that evening – and Mr Duluk’s conduct towards me – still sicken me when I think about what he did.

“He, as the magistrate said in court today, treated me poorly and was insensitive to my discomfort that evening.”

She said Duluk “grabbed me on more than one occasion that night, put ice cubes down the front of my dress, forced a bottle of spirits to my mouth and slapped me hard on my bottom”.

“He also made inappropriate comments to me which I found humiliating and rude,” she said.

She thanked Wells for his “careful consideration” of the matter, saying that as a lawyer “I know he was faced with a difficult decision when the prosecution called an eyewitness whose evidence of the slap was different to mine”.

“I also know Mr Duluk maintained his silence, a right he has in a criminal trial,” she said.

“I want to also thank my political colleagues from all sides of politics, my family and friends and all those individuals who have provided me with support through this ordeal.

“I want to stress I am glad I made a police complaint about Mr Duluk for what he did to me that night and that police believed there was sufficient evidence to charge him.”

Bonaros said she did “not want any woman or girl thinking the outcome I have experienced should stop them standing up and saying – enough!”

“I do not want any woman or girl thinking there was not benefit in taking action against someone like Mr Duluk – I am pleased I took this action in spite of the toll and in spite of the verdict,” she said.

“I have sent a message to him that what he did was wrong.

“I have sent a message to those in positions of power who feel entitled and untouchable that their time is up.”

However, she said she did “not want an apology from Mr Duluk”.

“The fact he pleaded not guilty… discounts any apology he might now pen 20 months after the incident,” she said.

“The shame is all his.

“I want changes in the way these matters are dealt with both in parliament and in the courts. I want victims heard.

“As difficult as it has been, I will use my personal experience to fuel my fight for the changes we need, because we all know – enough is enough!”