In an email to staff this morning, Adelaide University Vice-Chancellor Peter Høj wrote that the council yesterday gave “provisional approval to a reduction in the number of faculties from five to three”, but a final decision would not be made until the university consulted its students and staff in accordance with its enterprise agreement.

The university has suggested combining its Arts Faculty with the Professions, while also merging Sciences with the stand-alone Engineering, Computer and Mathematical Sciences Faculty.

The merges could result in cuts to courses that attract few students, with Høj telling students at a forum earlier this month that half of the courses currently offered attract less than one per cent of student enrolments.

In his email this morning, Høj wrote that one of the “key factors” that prompted the university council’s decision was “the opportunity to maximise the university’s resources towards our core academic purpose: teaching and learning and research”.

“Our focus should always be on providing an outstanding teaching and learning experience, and on conducting world-class research,” he wrote.

“Yesterday’s decision by Council means that the university will need to prepare a change proposal for you to consider and provide your feedback.

“At this stage we expect to be in a position to release a draft change proposal in the second half of September followed by several weeks of consultation.”

Høj wrote that the university would hold “further discussions with staff and students in the coming weeks and months”.

“We thank staff for their productive engagement in our collective quest to strengthen our fine institution,” he wrote.

Cuts to courses and faculties are being proposed as the university faces an annual shortfall of $47 million by 2023, spurred by the loss of international students due to coronavirus pandemic-prompted border closures.

To avoid the multi-million dollar shortfall, the university is aiming to find approximately $30 million in additional savings, while securing $20 million from new revenue sources.

Adelaide University’s National Tertiary Education Union vice president Kent Getsinger told InDaily that the council’s vote in support of the faculty merger was “very concerning” and could lead to up to 70 academic staff losing their jobs.

He said the union wanted the council to delay its decision because it felt staff had not been adequately consulted and were instead being “drip fed” information.

“People are distrustful of this whole process,” he said.

“We want (the university) to be completely more forthcoming and have an independent assessment of this, certainly from the South Australian Parliament to sit on the budget from last year prior to any decision by the university council.

“We feel that this is going to lead to a devaluing of education for the sake of our economic future, but also worse conditions for staff, many of whom are facing overwork… and many who are casualised and are in insecure work.

“We’re also really concerned about the effect this is going to have on students and the potential cutting of courses and services.”

Getsinger said the union feared that the university council’s provisional acceptance of the merger “may lead to a wider endorsement of further cuts”.

“They might use that to justify cutting administrative staff, so that’s a big concern that one effectively optically justifies the other and therefore evades critique.”

The university last month flagged that it was considering cutting 130 full-time administration staff as part of a series proposed cost-cutting measures.

A spokesperson told InDaily yesterday that it was up to senior management to decide whether to proceed with the redundancies and “no detailed decisions” had yet been made.

The spokesperson said the university planned to continue consulting with staff and students “for some months to come”.

It comes after the university in May reported a “better than expected” surplus for a pandemic-hit 2019-20 financial year.

Audited financial results for 2020 showed a statutory net operating surplus of $40.8 million for 2020 – down from $42.9 million the year before.

But a university spokesperson told InDaily yesterday that the surplus “primarily comprises research funding that cannot be used for any other purpose”.

He said the campaign was “far from over”, with students and staff proposing to oppose “every course cut, staff sacking and attack on pay and conditions”. 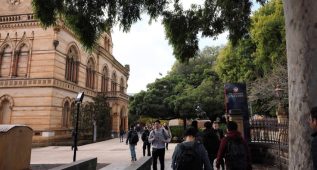 “If we don’t resist these attacks, it gives a green light to management to push forward with more cuts in the future here at Adelaide and nationally,” he said.

Høj wrote in his email to staff this morning that the university was “seeking to become a stronger, more sustainable institution, which will enable us to continue to serve the needs of the state and our community for many decades to come.”

It comes as Greens MLC Robert Simms prepares to move a Bill in State Parliament tomorrow to cap Vice-Chancellor salaries to just over $400,000 – the same level as the SA Premier.

“We need to restore the numbers of students and staff on university councils so that these decisions about the direction of these public institutions are made by those who actually understand what happens on the ground,” Simms said.