The University of Adelaide’s Council will today discuss whether it should continue “further exploration” of a proposal to combine its Arts Faculty with the Professions, while also merging Sciences with the stand-alone Engineering, Computer and Mathematical Sciences Faculty.

The merges could result in cuts to courses that attract few students, with the university’s Vice-Chancellor Peter Høj telling students at a forum earlier this month that half of the courses currently offered attract less than one per cent of student enrolments.

A separate decision to cut up to 130 administration staff and potentially 70 academic positions will be left to senior management.

Cuts to courses and staff redundancies are being proposed as the university faces an annual shortfall of $47 million by 2023, spurred by the loss of international students due to coronavirus pandemic-prompted border closures.

The University is proposing to make $30 million in savings and to identify new opportunities to generate $20 million in additional revenue.

A university spokesperson told InDaily this morning that “no detailed decisions” about its cost-cutting measures had yet been made, with the university planning to continue consulting with staff and students “for some months to come”.

But those in opposition have declared today “D-Day” for their campaign, with up to 100 students and staff expected to gather outside the University’s Mitchell Building this afternoon as part of an organised protest.

“No Adelaide University Cuts” campaign spokesperson James Wood told InDaily the protest was an opportunity for students to voice their concerns ahead of the University Council meeting.

“This is D-Day for us really after a really long period of the campaign,” he said.

“We’re sceptical and we suspect that the result is going to be for the cuts because these people (on the Council) are mostly from corporate backgrounds.

“But, there’s so much at stake here and we are expecting a really angry crowd.”

Wood said previous university cost cuts had impacted students’ education, with some saying their lectures and tutorials had been replaced by podcasts or videos.

He said academic staff were impacted by pay cuts and claimed they had reported being required to work longer hours than contracted.

Wood also questioned the need for cost-cutting measures after the university recorded a statutory net operating surplus of $40.8 million for 2020.

A university spokesperson said the surplus “primarily comprises research funding that cannot be used for any other purpose”.

They said the University’s financial result for 2020 had no bearing on the forward-looking financial impact of the pandemic. 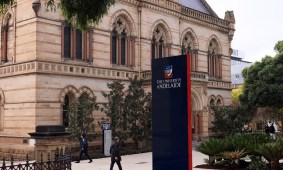 Høj told InDaily that the university “recognises freedom of speech as a fundamental human right”.

“The University, our Chancellor, my senior leadership and I are all committed to supporting people’s rights to freedom of speech, including their right to engage in peaceful protest,” he said.

More than 600 people have signed an online petition in opposition to the proposed cost-cutting measures.