Level 6 restrictions now apply, meaning that after the 6pm deadline, South Australian residents and people who are genuinely relocating, as well as Victorians seeking to enter SA, can no longer do so. They will have to apply to SA Health for an exemption.

However, people fleeing domestic violence are now subject to level 5 requirements, meaning they can enter South Australia but will have to undergo quarantine at a place determined by an authorised officer, undergo COVID-19 testing on day one, five and 13 and wear a mask at anytime they come into contact with the public.

Entry arrangements for essential travellers remains unchanged at this time, as does the 70km SA-Victoria cross-border bubble. Travel into SA via Melbourne airport is also allowed, as long as the person transiting doesn’t spend long there or leave to go outside into the Victorian community.

All travellers returning to South Australia must have an approved Cross Border Traveller form.

Police said all approved returning SA residents will also be given a quarantine sign, which must be displayed on the premises in which they are quarantining.

They will be given a personal direction by an authorised officer requiring them to ensure the sign is displayed.

Police also will conduct regular compliance checks on those under quarantine, with fines and prosecution for breaches.

Stevens said on Saturday afternoon that setting an entry cutoff deadline for 6pm Sunday was to give enough warning to travellers intending to return and to avoid a last-minute rush to the border and long queues.

Stevens made the order soon after Victorian Premier Daniel Andrews extended a lockdown order to the entire state due to concerns COVID-19 infections were spreading to regions, with another 21 cases reported from three families in Shepparton, with children at school.

The lockdown will apply until September 2 at the earliest.

Victoria on Sunday recorded another 65 cases of locally acquired COVID-19, including the Shepparton cluster, with concerns that a violent anti-lockdown protest in Melbourne on Sunday could also spread the virus further. 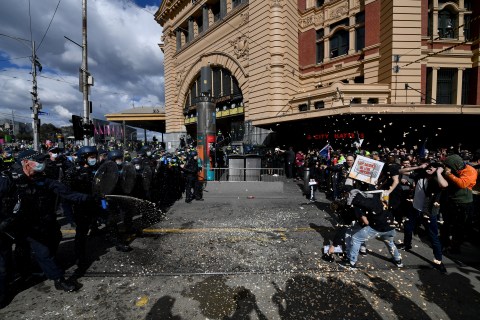 Stevens said that the situation of rising “uncontrolled” cases in Victoria, given the transmissability of the Delta variant, posed “a challenge” for authorities to get on top of.

“The decision of the Victorian Government to put a statewide lockdown in force I think compels us to take some stronger action to make sure we protect the South Australian community,” he said.

Stevens said the cross-border bubble was working well at the moment, but if there were cases appearing near the SA border “then I think we would have to reconsider our decision”.