The “People and Culture Unit” will be independent of government and led by a senior coordinator and at least one other staff member, who will develop policies, investigate complaints and provide training to MPs and parliamentary staff about human resources matters.

The Joint Parliamentary Services Committee is in the process of obtaining Crown Law advice about how the unit could operate, with the committee’s chair and Legislative Council president John Dawkins telling InDaily that he aimed to have the unit running “as soon as possible”, likely before the end of this year.

It follows the release of a damning Equal Opportunity Commission review handed down in March, which found State Parliament had a workplace culture where women felt pressured to remain silent when they experienced sexual harassment and assault.

The review, led by then acting Equal Opportunity Commissioner Emily Strickland, found that over 27 per cent of South Australian MPs or their staffers – the majority of whom were women – had experienced sexual harassment at least once at work.

Allegations included male MPs crossing the chamber to rub their legs against female MPs, a male MP putting his hand “really far up” a staffer’s skirt and a man exposing himself in front of his co-workers.

According to Strickland, six alleged incidents of sexual harassment reported to her “might otherwise be considered assault”.

In a submission to a joint parliamentary committee set up in March to implement the report’s recommendations, Dawkins wrote that the Joint Parliamentary Services Committee had agreed to establish a “People and Culture Unit”.

“To successfully perform the functions and deliver the services in the complex and sensitive environment of Parliament, it is expected that the officers will need to possess superior skills and expertise in human resources and workplace culture, particularly the coordinator,” he wrote.

“Processes are now being undertaken to establish the unit, the positions within it and the necessary funding.”

Dawkins wrote that the unit’s responsibilities would include:

Dawkins told InDaily that the JPSC had “signed off” on establishing the unit, but it was still waiting on Crown Law advice to “get the whole thing moving”.

“I’ve asked them (Crown Law) to hopefully get that as soon as we can,” he said.

“The advice is just about the way the unit operates across various employers of the building because obviously there’s people that I have control over as the President, the Speaker has got his lot in the House of Assembly and then there’s the joint ones employed by the Joint Parliamentary Services Committee.”

Asked whether the unit would be operating by the end of this year, Dawkins said he was “very keen to do that”.

He said the unit would be independent from the Government and paid for by the Parliament.

Greens MLC Tammy Franks welcomed the establishment of the unit, saying “on paper it looks like we might be bringing this workplace into the modern era”.

“I hope that there is political will behind the scenes to make this happen and do so far more quickly than we’ve seen to date on these matters,” she said.

But Franks said she was concerned that crossbench MPs were not privy to discussions about the unit’s remit, given the Joint Parliamentary Services Committee is only comprised of parliamentary staff and members of the Liberal and Labor parties.

“We (crossbench MPs) still don’t get consulted and I certainly think that we’re some of the most vulnerable MPs in the parliament, but also often a circuit-breaker, so we should have some involvement in the process,” she said.

“The JPSC is all-powerful, all-secret, runs everything in this building and often as a crossbencher you have no access to it whatsoever, other than you can send them an email or a request and then scratch your head wondering whether it will be addressed.”

In his submission to the joint committee, the House of Assembly’s Speaker Josh Teague noted the establishment of the unit.

But he wrote that it would be “disappointing and misleading” to suggest that Parliament House had an “antiquated work environment lacking documented policies and procedures commensurate with a modern workplace”.

“That is evidently not the fact,” Teague wrote.

“The House of Assembly applies its established management framework supported by an extensive range of human resource and administrative polices, guidelines and procedures that assist its 29 FTE employees.”

Premier Steven Marshall wrote in his submission to the committee that the Government was “currently considering the (Equal Opportunity Commission) report’s recommendations and will announce its position on the recommendations in due course”.

“I look forward to continuing to work with the Joint Committee to make parliamentary workplaces safer for all employees,” he wrote. 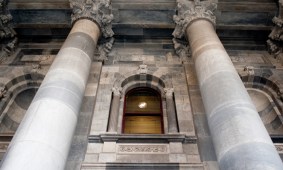 "He put his hand up my skirt": Report lifts lid on harassment in SA Parliament

The SA Liberal, Labor, Greens and SA Best parties provided submissions that noted the policies they have in place to address harassment in the workplace.