Medical device engineer Shem Richards came up with the idea for the Goldilocks suit in 2017 and established the company in 2019.

The first 50 suits hit the market in January this year and sold out within weeks.

The second batch of 300 suits went on sale in June and about half have been sold so far.

The garment presents like a bodysuit baby singlet with sensors screen printed on it that detect motion, activity and temperature.

The sensors connect to a low-energy Bluetooth module that sits in a pocket on the tummy of the suit and connects to a mobile phone app, which passes the data through machine learning algorithms to predict what state your baby is in and also looks at temperature and breathing.

“From that we build up a picture of what’s normal for your baby and then we just look for abnormalities,” Richards said.

The Goldilocks suit sells for $399 and includes one Bluetooth module, two singlets and the app.

The app includes videos from the Goldilocks midwife coach with suggestions of what you should do in each scenario, such as if the baby’s temperature increases or is not feeding well.

Richards has also recruited a dietician and sleep psychiatrist Professor Michael Gradisar who appears in advice videos on the app. 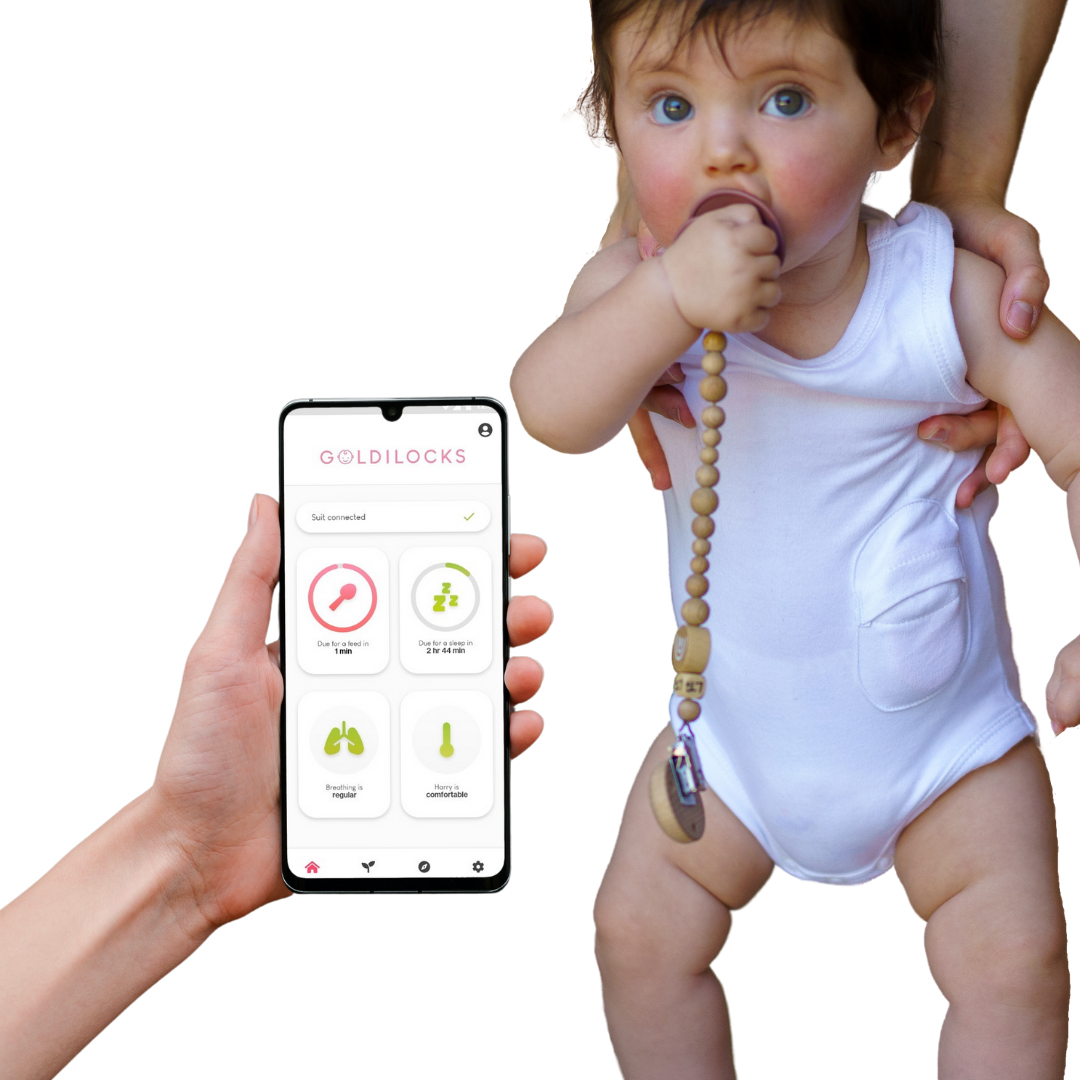 The Goldilocks suit and app.

He said the Goldilocks was in the final stages of some grants at the moment that aimed to fund the partnership with ECH for the adult-sized undergarment.

“It’s a similar concept to the baby suit but in this case, it’s building smart clothing to help parents live independently in their own homes while reassuring their adult children or care providers such as ECH that they are OK,” Richards said.

“What ECH wants to track are things like core temperature, skin temperature to ensure that they haven’t left the heater on or left it off when they needed it, breathing so they can pick up issues early and location to make sure they are not in the middle of a park at 3am when they shouldn’t be.

ECH is one of the state’s largest not-for-profit providers of retirement living accommodation and aged care services for people living independently at home.

“So we’re really excited to be working with Goldilocks to see how we can potentially adapt the technology to create smart clothing for older people that provides a comfortable way of assessing their wellbeing and quality of life in an unobtrusive way,” he said.

Richards also secured a $200,000 grant through Amazon in June to help with marketing, PR and distribution of the baby suit.

“Typically with Amazon, you’re a third-party seller but as part of this deal we are a first-party supplier so we sell it to Amazon and they sell it for us under the Goldilocks brand and that’s really good for our cashflow, distribution, access to customers and credibility,” he said.

“We’re also learning off the biggest and best direct-to-consumer brand in the world.”

Richards initially had the idea for the Goldilocks suit after the birth of his first daughter Amali in late 2016.

He said he wanted to create a medical device that provided peace of mind for new parents and was suitable for home use – a feature that has become even more valuable since the coronavirus pandemic.

“Hospitals are being reserved for critically ill patients and low acuity patients are being pushed to home care because the health care system can’t sustain them and it’s very expensive,” Richards said.

“After my wife had a baby I realised that this handover of spending a day or two in hospital and then going home isn’t done well by the health system and we can improve it by connecting clinicians to patients via technology.

“Then COVID hit and parents were bringing babies home from hospital and they didn’t have the same level of hands-on support that they used to have with a midwife coming to their house or regular visits to their GP.

“I thought using smart clothing and an app that reduces the stress for parents and extends the value of care beyond the hospital walls.”

The printed circuit boards for the garments are made by Devon Park company Entech Electronics and up until now the basic assembly and packaging of the suits has been done at Richards’ Marden home.

“Once we’ve got all our systems and process sorted out then we’ll hand it to Entech and they will do it all and we’ll scale through them,” he said.

Climate is right for a proactive ESG strategy

“They’ve got a sister factory in China that can scale up if we start getting orders for 20,000 but for the foreseeable future they will be made in Adelaide.”

The company is also looking to raise about $1 million to build up the team to help with the scaling and eventually look to export markets.

“It’s roughly a three-month cycle we work to so October will be our next batch, which will probably be 500 units but that will be dictated a little bit by how quickly we sell out and the demand we get.”