The former Marshall Government minister committed misconduct in public administration by attempting to unilaterally sack a government board, according to an unprecedented finding by the state’s Ombudsman.

The finding, which was published early this morning after a lengthy legal standoff, casts new light on the former Transport, Planning and Infrastructure Minister’s bombshell decision to end his political career at next year’s election, having already stood down from the ministry amid last year’s parliamentary entitlements scandal.

Knoll, first elected in 2014, was in the first term of a promising ministerial career and had been touted as a future Treasurer or even Premier.

The misconduct finding, which dates back to events in 2019 that were exclusively reported at the time by InDaily, is the first time such a ruling has been made against a minister under the state’s Independent Commissioner Against Corruption Act.

It relates to Knoll’s attempt to sack the former Cemeteries Authority chair, prominent lawyer Ester Huxtable, which as InDaily first reported in January 2020 prompted an accusation in parliament that he acted unlawfully.

READ MORE: How InDaily revealed the controversy in 2020

In a statement and finding published this morning, Ombudsman Wayne Lines said that “on referral from the ICAC, [I] investigated former Minister Stephan Knoll’s removal and appointment of Adelaide Cemeteries Board directors”.

“The Ombudsman’s view was that Mr Knoll committed misconduct in public administration by purporting to remove directors from the Board,” he said.

Lines noted that publication of his initial judgment was delayed “due to judicial review proceedings issued by Mr Knoll”.

“Those proceedings have recently been discontinued,” he said.

Lines expressed his “final view” that “in connection with the attempted removal of individuals from the Board of the Adelaide Cemeteries Authority on 5 July 2019, Minister Knoll committed misconduct in public administration for the purposes of section 5(3)(a) of the ICAC Act”.

“It is important to note that while I consider that the Minister’s conduct amounts to misconduct… I would not necessarily characterise the misconduct as ‘serious’,” he added.

Knoll resigned from the ministry last year and will leave parliament altogether at the March election.

Lines said: “In the circumstances, I do not propose to make any particular recommendations… however, I intend to provide a copy of my final report to the Premier so that the Premier may consider whether to take any further action.”

A spokesman for Steven Marshall said the Premier “is reviewing the Ombudsman’s report, which contains no recommendations for the Government”.

Responding to the long-delayed publication of the Ombudsman’s findings today, Knoll said in a statement: “The Ombudsman report finds I acted swiftly and appropriately once the administrative error was identified and immediate steps were taken to correct it.”

“A minor procedural mistake was made and I fixed it straight away,” he said.

“This decision sets the bar so low that almost any inadvertent Ministerial error with no adverse consequences could be seen as misconduct.”

Knoll said he stands by his decision “to appoint a new skills-based board that has now been in place for more than 18 months and have been proven to be excellent and successful appointments”.

In May 2019, Knoll determined to remove members of the Cemeteries Board appointed by the former Labor Government and replace them with handpicked members, writing to the incumbent directors in July of that year to inform them of their termination.

But the chair and at least one other member challenged the then-minister’s power to remove them from office, arguing the Cemeteries Act holds that only the Governor can remove a director, on the minister’s recommendation and with due cause.

Section 5.3(a) of the state’s ICAC Act defines misconduct in public administration as the contravention of a code of conduct by a public officer, with Lines asserting that the relevant code was the ministerial code of conduct, which provides that “ministers are expected to act honestly, diligently and with propriety in the performance of their public duties and functions”.

But Knoll disputed the Ombudsman’s initial finding, and contested the misconduct finding.

Lines said that after his initial draft report, “I have carefully considered the responses and… ultimately, Minister Knoll’s response persuaded me to reconsider my views concerning the applicable provisions of the Code and, given that I have reconsidered the basis for my views, I considered it fair to provide Minister Knoll and the one informant who responded to my provisional report with my revised provisional views”.

The findings state that “when asked what steps he took to satisfy himself that he had statutory authority to remove… the Board, the Minister told my investigation: ‘I relied upon the advice of my Chief of Staff, who, through other members of my staff, obtained advice from the Department of Premier and Cabinet, Boards and Committees, the Crown Solicitor’s Office and the Chief Executive of the Adelaide Cemeteries Authority’.

“‘I had no reason to doubt the advice of my Chief of Staff who has always acted diligently and honestly,'” he told the investigation.

Lines said in his findings: “I consider that the Minister’s failure to make enquiries as to his authority or the process at any time during the course of the extended discussions about the proposed removal of directors from the board falls short of the standard of diligence expected of Ministers purporting to exercise a statutory power.”

“As Minister responsible for administration of the Cemeteries Act, Minister Knoll ought to have known whether he had statutory authority to remove the directors and if he did not know, he ought to have sought advice or otherwise taken steps to satisfy himself that he had legal authority to act,” he said.

As InDaily reported last year, a series of letters between Knoll and Huxtable – dated between May and August 2019 – revealed a bitter dispute surrounding the board’s attempted sacking, with Huxtable insisting her term did not expire until this year, and seeking to be “paid out for the balance of my term, plus an ex gratia payment for my seven-plus years of service on the Board and the various Committees for which there has been no remuneration.”

In reply, Knoll told her that “in accordance with the Adelaide Cemeteries Act… I have made the decision to end your appointment effective immediately”.

“With regard to your request to be paid out for your remaining term, that request is not accepted… under neither the Act or your letter of appointment is compensation for early termination stated,” he added.

But Huxtable wrote again, pointing out to Knoll that the Act “does not authorise you to immediately end my appointment”, and that “you can only recommend my removal as a Director on a sufficient ground”.

“It can only be the Governor… who can remove me from office, and [then-Governor Hieu van Le] has not done so,” she wrote.

She insisted her four-year term under the Act “is equivalent to a contract and, by law, I am entitled to be compensated for my contract being terminated early”.

“I intend to pursue this matter,” she wrote at the time.

After seeking Crown Law advice, Knoll then wrote again, telling Huxtable that under the Act “I recommended that the Governor remove you as chair of the board of the Adelaide Cemeteries Authority”.

“On 2 August 2019 the Governor removed you from office under… the Act, effective from that date,” he wrote.

Many of the former board members replaced by Knoll had strong ties to the ALP, including former Labor MP Robyn Geraghty, veteran union boss Wayne Hanson – whose son Justin is now a Legislative Councillor – and experienced board director Mary Patetsos.

He also appointed Liberal-linked businessman Johnathon Matthews, and Joanna Andrew, a partner in Mellor Olsson and a prominent member of the Liberal Party whose sister Nicola Centofanti has since entered parliament as a Legislative Councillor.

Lines found today, however, that “Minister Knoll did not commit misconduct or maladministration in public administration for the purposes of the ICAC Act by selecting one or more of the new directors of the Board based on a prior personal relationship”.

Under parliamentary privilege in late 2019, Labor frontbencher Tom Koutsantonis quizzed Knoll about the board changes, with the minister arguing: “After having undertaken a skills matrix in relation to the Cemeteries Authority, it was pretty clear that there were some skill deficiencies on that board.”

“What we were doing was replacing a board filled with Labor cronies with people who, in my opinion and in the Government’s opinion, are very well-credentialed people to help run an organisation that is in the process of undertaking some change.”

At the time, Koutsantonis disputed any suggestion that Huxtable could be described as a ‘Labor crony’, noting: “To the best of my knowledge, she is not a member of the Australian Labor Party, nor has she ever been.”

“She is just a well-respected lawyer, and there was an attempt to have her terminated unlawfully,” he told parliament.

Responding to the findings today, Koutsantonis said Knoll was “the first minister in the state’s history to be found guilty of misconduct”, arguing it was a “staggering blow to the credibility of the Marshall Liberal Government”.

“Stephan Knoll quit the ministry a year ago amid the parliamentary expenses scandal – even back then he knew about this misconduct investigation,” he said. 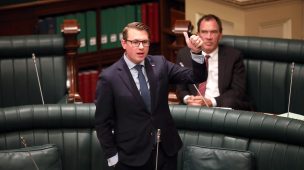 “Steven Marshall needs to outline what penalty he will impose on Stephan Knoll.”

The Government is yet to confirm if Knoll was indemnified by taxpayers for his lengthy legal battle, however a Legal Bulletin outlining the reimbursement process for MPs and ministers in such circumstances suggests that they will only be entitled to indemnification if no adverse finding is made against them.

Asked at the time whether he had acted outside his authority, Knoll’s office told InDaily in 2020: “The Minister wrote to three former board members regarding their appointments and the new board members were appointment [sic] in August [of 2019].”