Police commissioner and state emergency coordinator Grant Stevens announced on July 21 that the state’s emergency management direction was being updated to mandate QR code check-ins be displayed on public transport, taxis and rideshares.

Stevens said the decision followed an expansion of the government’s QR code database, enabling it to manage “the volume of activity on our public transport system”.

Three weeks later, the Department of Transport and Infrastructure says the “initial” rollout of QR codes across the bus, train and tram network is complete.

“The codes have been installed in a range of locations inside the vehicles, including on windows, walls and screens,” a  spokesperson said.

“Please make sure you use the QR check-in whenever you use public transport, or other passenger transport services like taxis or rideshare.”

A walk through an Adelaide tram shows 20 QR codes displayed on the interior windows.

But the spokesperson noted that paper sign in sheets – mandated for public venues such as pubs, cafes and restaurants – will not be provided on the Adelaide Metro network.

“However, public transport is an essential service, so if a customer does not have a smart phone and cannot check-in, they will still be able to travel,” the spokesperson said. 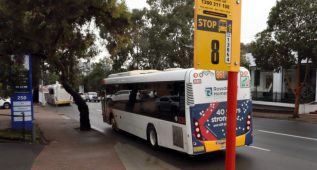 “All public transport users are encouraged to register their metroCARD, so they can check their own travel history if required.”

Bus, tram and train drivers, as well as cabbies, have already been told it is not their job to monitor check-ins on their vehicles.

QR code displayed on the interior of a bus door (Photo: Thomas Kelsall/InDaily).

Asked who was responsible for monitoring compliance, the Department spokesperson said: “The South Australian Government will take an education-based approach to compliance, however everyone has responsibility to do the right thing and help stop the spread of COVID-19.”

There are 1046 buses across the Adelaide Metro network, according to the Department of Transport, as well as 70 diesel rail cars, 22 three-car electric trains and 24 trams.