Disability support workers were prioritised in the first phase of the vaccine rollout, with Human Services Minister Michelle Lensink earlier in the year saying 900 frontline staff working in disability accommodation would receive a vaccine by the end of March.

But according to the latest data provided by the Department of Human Services, as of Thursday 878 disability accommodation workers have received at least one dose of a vaccine.

Of those staff to receive a jab, the department says 428 are fully vaccinated.

This represents just over 27 per cent of the more than 1543 full-time equivalent disability accommodation staff employed by the DHS.

The latest figures also mean more than 43 per cent of the State Government’s disability support workers are yet to receive a COVID-19 vaccine as of Thursday.

A spokesperson for the DHS said the number of support workers vaccinated “represent a higher percentage than [the] national average”.

“We want to make it as easy as possible for Department of Human Services supported accommodation staff to get vaccinated and that’s why we are continuing to support staff to access vaccination in paid work time and strongly encourage them to roll up their sleeves,” Lensink said.

“The COVID-19 vaccine is safe, free and crucial in our fight against the virus.”

“It’s six months since Disability Support Workers were supposed to be given the highest priority in the vaccination roll-out,” Cook said.

“For only a quarter of the people looking after a highly vulnerable disability community to be [fully] vaccinated is a disgrace.”

Cook said more needed to be done to provide “an informed and accessible pathway” for disability support workers to access vaccinations.

The DHS has previously attributed the slow pace of the rollout to national health advice which recommended against administering the AstraZeneca vaccine to people aged under 60.

“The rollout of COVID-19 vaccinations to the DHS disability workforce began successfully in March but was significantly impacted by new health advice received in April,” a DHS spokesperson told InDaily on July 14 when only 320 disability support workers had received a vaccine.

“Many staff are aged under 60 years and therefore not advised to receive the AstraZeneca vaccine as planned.”

In a bid to boost the disability worker rollout, the DHS last week opened a dedicated Pfizer clinic in Highgate Park exclusively for disability and aged care workers.

However, the clinic on Monday opened to anyone under 40 who wished to book an appointment, amid claims there was an “oversupply” of Pfizer vaccines due to low demand.

Meanwhile, the vaccine rollout for people with disabilities living in State Government care is progressing at a greater pace.

“Of those remaining, approximately one third have declined a vaccination and two-thirds require a home visit, which is being arranged,” a DHS spokesperson said.

The United Workers Union has called on the State Government to reverse a new mandate for all aged care workers in SA to receive a COVID-19 vaccine by September 17, arguing it could cause “extreme staffing shortages in the industry”.

Police Commissioner and state emergency coordinator Grant Stevens on Tuesday night signed a new direction mandating “all staff, contractors or volunteers at a Residential Aged Care Facility” receive at least one dose of a COVID-19 vaccine or have evidence of a booking to receive a second dose by September 17.

The union said statistics from the Federal Government show only 51 per cent of aged care workers in SA have received a COVID-19 vaccine, with 6500 vaccines a week needed for the sector to meet the deadline.

“While we will always encourage our members to follow the health advice of the State and Federal chief health officers, it’s not a surprise that there is an element of hesitancy among aged care workers, as misinformation has been able to thrive in the context of regularly changing vaccine advice,” Smith said. 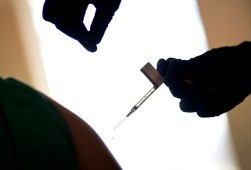 “Even if it was realistic to deliver more than 30,000 doses in five weeks, there hasn’t been enough done to allay the fears of aged care workers who have been subject to not just online misinformation but also reports in the mainstream media around blood clots and other risks associated with various vaccines.

“With all this considered, if workers are banned from the industry, extreme staffing shortages will become an inevitability and will compound the problems being faced in health as aged care residents will be forced to take up much-needed beds in hospitals.”

Chief public health officer Nicola Spurrier on Tuesday said the number of vaccinated aged care workers is “not as high” as authorities would like.

“I think we’ve seen a steady increase in the number of aged care workers being vaccinated but it’s not as high as what we really need it to be,” she said.