KIPT this morning announced plans to revert 18,6967 hectares of its land to agriculture, a decision that will involve knocking over and burning about 14,500 hectares of pine and blue gum plantations.

The decision follows an announcement by State Planning Minister Vickie Chapman late on Monday that the government had rejected KIPT’s proposal to develop a $40 million port at Smith Bay.

The proposed port was given major project status in 2017 and was recommended by Chapman’s department that it could be supported, but Chapman vetoed the development due to the potential for long-term environmental damage, impact on local businesses and the island’s character.

The KIPT decision comes at a time when severe structural timber shortages are threatening to derail South Australia’s building boom.

The company says it is still open to salvaging some of the timber but will now shift its focus to converting its estate into farmland. 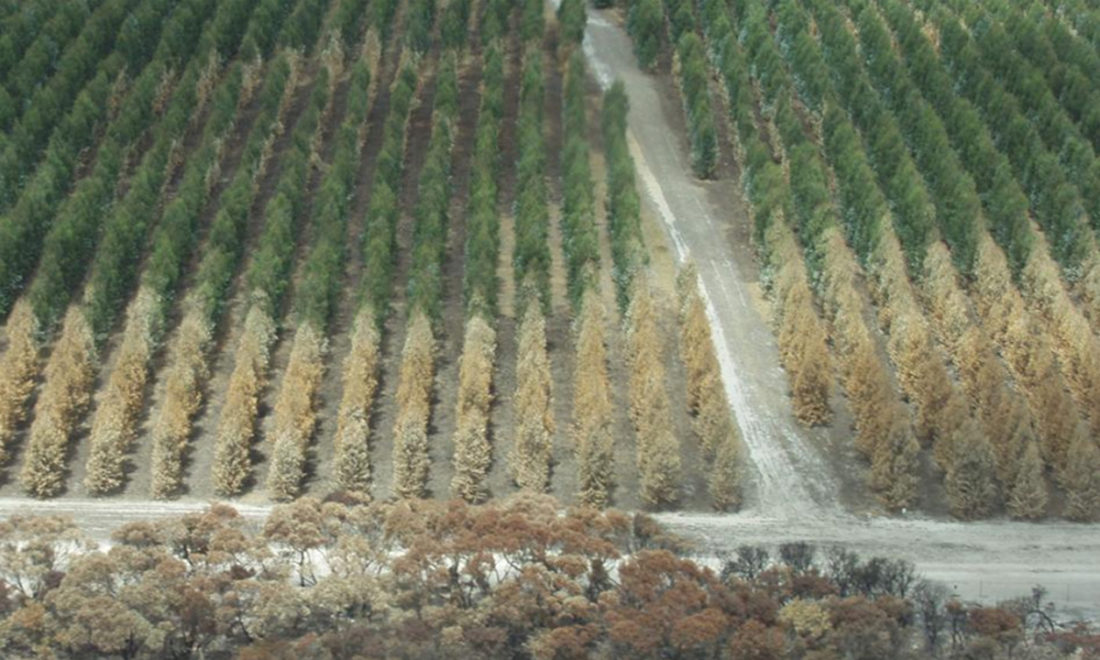 KIPT managing director Keith Lamb, who also announced this morning he would retire following the company’s annual general meeting in late October, said the board had been working up contingency plans for some time in the event that Chapman rejected the Smith Bay port.

“Once the decision was made by the minister then the board was ready to execute those plans and that’s what it’s doing,” Lamb told InDaily.

“The physical assets prior to the fire were very high quality in very good growing conditions with average biological growth rates about 30 per cent higher than on the mainland so certainly there was tremendous opportunity to build a business around those assets but of course it took a knock with the fire.

“The issue now we have is the government’s decision to decline the port means there is no chance that any rational investor would back this horse so the company is now in a position where it has to just move on.”

Lamb said the company’s total estate was about 25,000ha in total and included about 14,500 of standing forest, a further 4000ha of potential agricultural land and almost 7000ha of remnant vegetation, water bodies and streams.

“The company is leaving salvage open but its main thrust is now is to focus on reversion – pushing the trees, heaping them and burning them.”

In this morning’s announcement to the Australian Securities Exchange, KIPT said its 2021 results would reflect a write-down in the value of its Smith Bay wharf site of $12-$14 million from $18.2 million and the re-evaluation of its biological assets from $5.9 million to zero.

The valuation of the company’s land under the agricultural strategy has been assessed by Jones Lang LaSalle (JLL) Advisory Services as $51.4 million.

Lamb rejected suggestions that the company should have had a port in place before establishing a forestry business on the island.

He said the plantation’s previous owner Gunns had plans to develop a port at Ballast Head near American River but those plans were abandoned following the Global Financial Crisis.

“Government has had more than 100 years to make some crucial decisions about setting aside land for future development and when you look at Kangaroo Island, the only part capable of development for a port that is not in a marine park or a national park is Smith Bay,” he said.

“Any company that decided it was going to go forward with a proposal to build something in a marine park is asking for trouble – we avoided that yet now the minister has decided it is still unsuitable so there is a real issue for the future of the island.

“How can the island thrive when it doesn’t have access to modern infrastructure?” 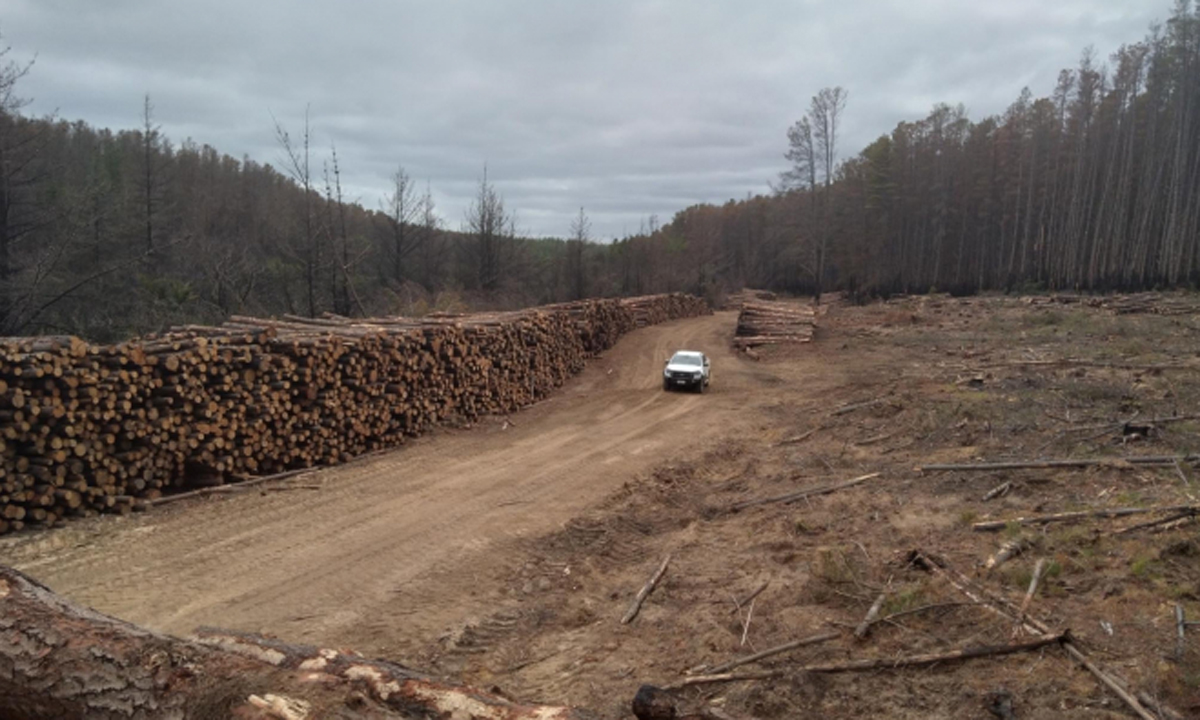 The 238-page Department of Planning, Transport and Infrastructure report into the port plan found that “on balance… the proposal can be supported subject to additional requirements (including reserved matters for further assessment) and conditions”.

It concluded that the social, environmental and economic impacts had been considered and could be managed via plans and strategies in consultation with state and federal agencies along with an EPA licence, with a governance group including the federal department of Agriculture, Water and Environment and Kangaroo Island Council to monitor the project.

Lamb said pushing the trees over would begin immediately while the burning was unlikely to start until at least April next year.

He said the company was yet to decide whether it would manage the agricultural land itself, lease it out or sell it off.

“We’ll keep pushing until everything is pushed over but the burning season is limited from after Anzac Day until it gets too wet and then a small window in spring before it gets too dry,” Lamb said.

“The western part of Kangaroo Island is a bit too wet for reliable cropping so mostly it will mostly be a livestock play and we’re working through those options now.

“To have a 25,000 ha estate almost in a single line in high rainfall, high productivity country in Australia is quite unique – there are not many agricultural enterprises of that scale so there is great opportunity for the company and for the shareholders to realise the value of that business one way or another.”

The building industry has flagged the fire-affected Kangaroo Island timber as a possible solution to the state’s timber shortages caused by a lack of supply and booming demand.

The loaded trucks then drive from Cape Jervis to Port Adelaide where KIPT has established a depot to store timber before it can be on sold to local sawmills or shipped overseas.

However, the quantities have not been enough to make a significant dent in KIPT’s stockpiles or reduce the pressure on supply.

SeaLink’s Kangaroo Island ferry service has been used to transport KIPT logs to the mainland.

Lamb said the company had been trying to establish alternate routes for shipping logs off the island for 18 months including via Kingscote and American River.

“We’ve encountered obstacles at every turn so the company’s view is that it has the capacity to just get on with that reversion program but if governments or third parties want to work with us on the salvage program we are very happy to do that,” he said.

“We are very mindful that South Australia has a timber shortage and we have 300,000 tonnes of high-quality structural timber that would make 10,000 homes and we are very mindful that there is great interest in salvaging it but at the moment we can’t get it off the island economically so that’s where the challenge lies.

“We’re still doing the harvesting right now but we are down to one truck a day on the ferry because it’s a wintertime service and we need to be doing 10 trucks an hour, not one truck a day.

“We need substantial assistance to get some activity going through Kingscote … but so far we’ve heard nothing.”

James Davies will be appointed KIPT executive chairman at the AGM in late October.

Current chairman Paul McKenzie will remain as a non-executive director.

The managing director position will not be replaced following Lamb’s retirement.

Trading of KIPT shares resumed this morning after being placed in a trading halt on Monday afternoon when they lost almost 10 per cent of their value in just 40 minutes.

The share price recovered quickly at first this morning but was just one cent up on its opening quote of $1.05 at noon.

KIPT has a market capitalisation of $59.58 million and was ranked No.69 in InDaily’s 2020 South Australian Business Index of the state’s top 100 company’s.